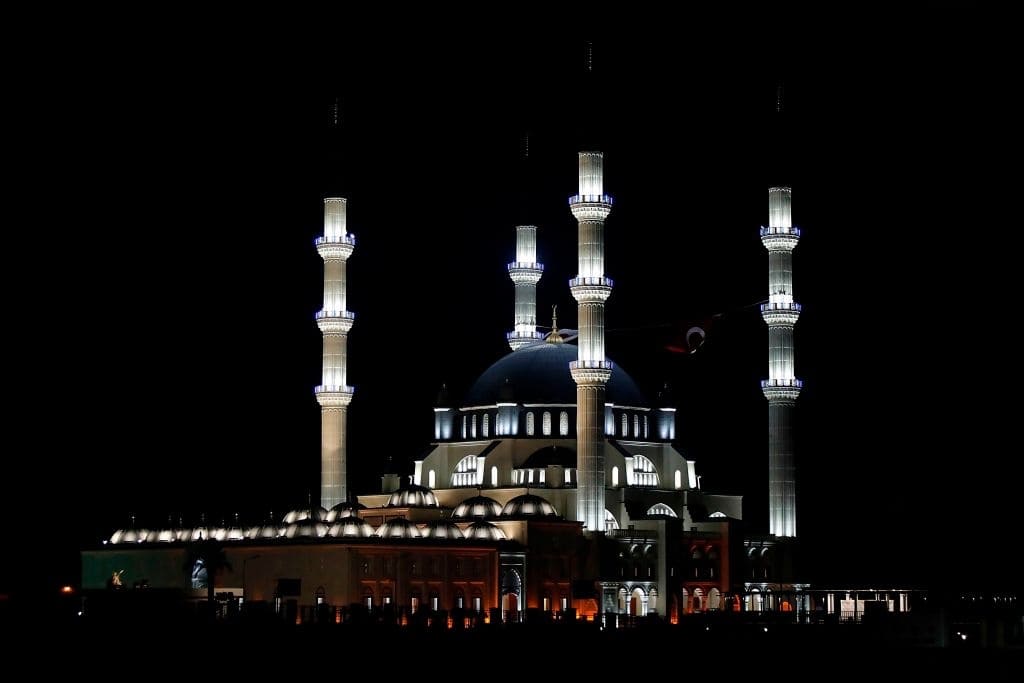 Between 2002 and 2016, the Turkish government built at least 39 new mosques in the Turkish section of Cyprus (pop. 326,000) — including the Hala Sultan mosque in Nicosia (pictured), which can house a congregation of 3,000. (Photo by Matthieu Clavel/AFP via Getty Images)

A famous tweet by an unknown Turk and shows how pathetically crazy some Turks can get in their never-ending wars with the rest of the world:

“We should bomb Turkish Cyprus to show the world what a psychopathic nation we are. The world should ponder what the crazy Turks would do to the others if they did this to their ‘baby'” — @spleenistanbul

“Turkish Cyprus” here is the breakaway statelet of the Turkish Republic of Northern Cyprus (TRNC), recognized only by Turkey — also known among the Turks as the “baby homeland.” Since Turkey invaded the northern third of the island in 1974 in response to a coup by Greek Cypriots that aimed to annex Cyprus to Greece, the “Cyprus cause” has been emblematic in reflecting Turkey’s militarist and nationalist sentiment.

Cyprus, home of the goddess Aphrodite and the “island of bitter lemons,” has a history of invasions, takeovers and ethnic strife. In 1571, the Ottomans captured Cyprus and made it one of their colonies until 1878, when an invading Russian army reached the outskirts of Istanbul. Angry Turks accused Sultan Abdulhamid II for the near-demise of their empire. Neo-Ottomans of the time even staged a failed coup d’état against the “Red Sultan” who sought British help for his survival. Britain agreed to protect the sultan and help the Ottomans against the invading Russian army, but on one condition:  leave Cyprus to the British Empire. Which, in 1878, is what the ailing Istanbul government did.

With the 1923 Treaty of Lausanne, the new, secular Turkish state officially recognized British hegemony over Cyprus. In 1938, Turkey even banned granting citizenship to Turkish Cypriots in order to prevent a dwindling of the Turkish community on the island. In the 1950s and 1960s fierce nationalist sentiment over the fate of Turkish Cypriots forced Turkish governments to rethink their rather pacifist Cyprus policy. Violent ethnic clashes in 1963-64 sparked a fresh wave of Turkish and Turkish Cypriot nationalism that advocated the division of the island along Turkish and Greek lines. Then came 1974. Today, Nicosia, the Cypriot capital, is the only divided city in Europe. The TRNC, proclaimed in 1982, has not been recognized by any country other than Turkey. That is the official history.

TRNC’s president, Mustafa Akıncı, in an interview with The Guardian published on February 6, sounded an alarm that not many Turkish Cypriot politicians had sounded before. Akıncı, a socialist with a degree from a prestigious university in Ankara, said that he supported reunification of the island under a federal “roof.” If this failed to happen, Akıncı said, northern Cyprus would grow increasingly dependent on Ankara and could end up being swallowed up as a de facto Turkish province.

The Turkish Cypriot leader also said that he had no problems with the mother-and-baby metaphor; yet he would prefer independent, brotherly relations with Ankara. For the Turks, Turkey is the homeland and Cyprus is the “baby homeland.” Akinci is hinting at his wariness about Turkish influence and is suggesting a better one: brotherly relations between two independent states. His “no objection to the mother-and-baby metaphor” is his diplomatic way of expressing his preference without outrightly confronting Ankara.

Beneath the unusual Turkish-Turkish Cypriot friction lies precisely the same reason that Erdoğan has been at odds with more than half of the Turkish people: a top-down, systematic government effort to Islamize society.

Between 2002, when Erdoğan’s Justice and Development Party (AKP) came to power, and 2016, Ankara built at least 39 new mosques in the Turkish section of Cyprus (pop. 326,000) — including the Hala Sultan mosque in Nicosia, which can house a congregation of 3,000. The equivalent would be building a synagogue in Israel with seats for 90,000 people.

In January 2018, several thousand Turkish Cypriots marched against what they said was Turkey’s unwanted influence that has emboldened hard-right groups to try to silence opposing views. Protesters braved pounding rain to voice their opposition to Turkey’s agitation of “fascist and extremist” segments of their society.

Erdoğan’s government has been generously sending Turkish taxpayers’ money to religious foundations, associations, NGOs and Quranic schools in Turkish Cyprus via the Turkish Aid Delegation. Turkey also built a (Sunni Muslim) theology academy at the same time as it ignored local criticism against it.

“I could count a four-minaret Ottoman mosque built in the middle of a plain on the Nicosia-Ercan (airport) highway… A huge mosque symbolizing a new Ottoman sultan is in charge. And not just that. There have been mosque constructions in all areas in northern Cyprus, including former Greek Orthodox churches,” Yusuf Kanlı, a prominent Turkish Cypriot columnist, told Gatestone Institute. “All that effort has upset Turkish Cypriots.”

While Erdoğan and his Islamists are not pathetically crazy enough to bomb their “baby homeland” down south, their creeping Islamization has the potential to separate “the mother and the baby” for good.

Burak Bekdil, one of Turkey’s leading journalists, was recently fired from the country’s most noted newspaper after 29 years, for writing in Gatestone what is taking place in Turkey. He is a Fellow at the Middle East Forum.

Yusuf Kanli: Who are the Turkish Cypriots?