The target of a drone attack on a Hezbollah facility in Beirut early Sunday that has been attributed to Israel was an expensive and rare industrial mixing machine used in the creation of solid fuel, and the raid set back the terror group’s plans to develop long-range precision missiles by at least a year, according to Hebrew media reports late Tuesday.

In the predawn hours of Sunday morning, two copter-style drones flew into the Dahiyeh neighborhood of Beirut. One crashed and was recovered by Hezbollah, while the other exploded while still in the air, causing damage and sparking a fire.

Hezbollah and the Lebanese government have blamed Israel for the drone strike. Israeli officials have refused to comment on the matter, and many analysts have suggested the drones were Iranian, not Israeli.

While Israel has been facing off against Hezbollah and its patron Iran, following the 2006 Second Lebanon War, the Israeli military has largely refrained from carrying out large strikes against the terror group inside Lebanon, instead, according to foreign reports, focusing the fighting in Syria and more recently Iraq.

Though Israel has been accused of conducting limited airstrikes against Hezbollah deep in Lebanon in the 13 years since the war, this week’s drone attack in the heart of Beirut would mark a shift to a more aggressive defense policy for the Jewish state.

According to Lebanese media Tuesday, the country’s military believes that the unmanned aerial vehicles were launched from within eight kilometers of the site of the explosion, indicating that they were either launched within Lebanon or came in from the sea.

Hezbollah has claimed that only its media offices were damaged by the blast.

However, on Tuesday afternoon, the British Times newspaper reported that the targets of the strike were two crates that held materials for a Hezbollah program to turn its stock of simple rockets into precision-guided missiles — a project that is of deep concern to Israel as it would significantly increase the threat posed by these projectiles.

Last September, Prime Minister Benjamin Netanyahu told the United Nations General Assembly in a speech that Israel knew of this Hezbollah plot and even provided the geographic coordinates for the facilities where the missiles were allegedly being produced.

Following Netanyahu’s remarks and the increased scrutiny in Lebanon, the terror group reportedly moved these factories to different locations.

This Hezbollah program is focused on two main goals: locally manufacturing long-range precise missiles and upgrading its current stock of simple rockets into precision-guided ones.

According to Israeli defense officials, the terror group has not yet succeeded in these goals and possesses only a small number of precision-guided missiles.

Hezbollah chief Hassan Nasrallah has denied the existence of the factories but said his organization does possess such weaponry.

According to these reports, the mixer was the far more significant target, as it is necessary for the creation of the solid fuel used in long-range missiles and was the only machine of its kind inside Lebanon.

This type of device — known as a vertical planetary mixer — is used around the world in militaries and space programs to produce solid fuels. Due to the delicate nature of this work, these machines must be incredibly precise and are therefore difficult to manufacture.

According to Channel 13 news, the planetary mixer targeted in the Beirut strike had recently been flown into Lebanon from Iran. It was being held temporarily in Dahiyeh before being transferred to the factory where the actual work on the precision missile project was being performed.

This mixer and the fuel that it would help produce would have been used by Hezbollah to create a locally-produced, precise long-range rocket.

The damage to the mixer rendered it unusable and is believed to have set back this aspect of Hezbollah’s precision missile program by at least a year.

The computerized control unit was reportedly tied to the second aspect of the terror group’s missile project — upgrading existing stocks of rockets.

It was not immediately clear how valuable a target this was.

On Tuesday, Hezbollah said the drone that crashed in Beirut contained an explosive device weighing more than five kilograms (11 pounds). 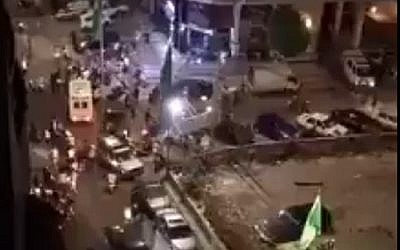 The scene of where an alleged Israeli drone fell in southern Beirut on August 25, 2019. (screen capture: Twitter)

“Experts dismantled the first drone that crashed in Beirut’s southern suburbs; it was found that it contained a sealed explosive device” of around 5.5 kilograms, Hezbollah said in a statement.

“We confirm that the purpose of this first drone was not reconnaissance but the carrying out of a bombing attack,” it added.

The latest discovery, Hezbollah said, confirms that Sunday’s drone attack involved not one but two explosive-rigged drones — one which exploded and the other that did not because of a technical failure.

Hezbollah, considered a terrorist organization by Israel and the United States, is a major political actor in Lebanon and also a key government backer in war-torn Syria.