Trending
You are at:Home»Categories»Headlines»The Doomsday Clockwork
By The Bulletin on 13 March 2017 Headlines

Since it was set in 1947, the Bulletin has reset the minute hand on the Doomsday Clock 22 times, most recently in 2017 when we moved it from three minutes to midnight to two and a half. Every time it is reset, we’re flooded with questions about the internationally recognized symbol. Here are answers to some of the most frequent queries.

What is the Doomsday Clock? The Doomsday Clock is a design that warns the public about how close we are to destroying our world with dangerous technologies of our own making. It is a metaphor, a reminder of the perils we must address if we are to survive on the planet.

When the Doomsday Clock was created in 1947, the greatest danger to humanity came from nuclear weapons, in particular from the prospect that the United States and the Soviet Union were headed for a nuclear arms race. The Bulletin considered possible catastrophic disruptions from climate change in its hand-setting deliberations for the first time in 2007.

Who created the Doomsday Clock? Co-editor Hyman Goldsmith asked artist Martyl Langsdorf to come up with a design for the cover of the June 1947 edition of the Bulletin, the first issue published as a magazine rather than a newsletter. Martyl—as she was known professionally—was married to a physicist, Alexander Langsdorf, who worked on the Manhattan Project while at the University of Chicago.

At first the artist considered using the symbol for uranium. But as she listened to the scientists who had worked on the Bomb, as they passionately debated the consequences of the new technology and their responsibility to inform the public, she felt their sense of urgency. So she sketched a clock to suggest that we didn’t have much time left to get atomic weapons under control.

What time was displayed on the original Doomsday Clock? Martyl set the original Clock at seven minutes to midnight because, she said, “it looked good to my eye.”

Who decides what time it is? In the early days, Bulletin Editor Eugene Rabinowitch decided whether the hand should be moved. A scientist himself, fluent in Russian, and a leader in the international disarmament movement, he was in constant conversation with scientists and experts within and outside governments in many parts of the world. Based on these discussions, he decided where the clock hand should be set and explained his thinking in the Bulletin’s pages.

When Rabinowitch died in 1973, the Bulletin’s Science and Security Board took over the responsibility and has since met twice a year to discuss world events and reset the clock as necessary. The board is made up of scientists and other experts with deep knowledge of nuclear technology and climate science, who often provide expert advice to governments and international agencies. They consult widely with their colleagues across a range of disciplines and also seek the views of the Bulletin’s Board of Sponsors, which includes 15 Nobel Laureates.

When were the hands set closest to midnight? In 1953 the minute hand was moved to two minutes to midnight after the United States and the Soviet Union each tested their first thermonuclear weapons within six months of one another.

When were the hands set farthest from midnight? In 1991, with the end of the Cold War, the United States and the Soviet Union signed the Strategic Arms Reduction Treaty, the first treaty to provide for deep cuts to the two countries’ strategic nuclear weapons arsenals, prompting the Bulletin to set the clock hand to 17 minutes to midnight.

Were the hands moved during the Cuban Missile Crisis in 1962? No. They were not moved during the 10-day crisis because too little was known at the time about the circumstances of the standoff or what the outcome would be. In fact, after the crisis, US and Soviet leaders installed a direct telephone line for communication, and within months signed the Partial Test Ban Treaty outlawing underground nuclear weapons testing—the first treaty addressing the nuclear weapons threat. On the basis of these steps, the Bulletin set the clock back from seven minutes to midnight to 12 minutes to midnight in 1963.

Where can I visit the Doomsday Clock? There is no physical Doomsday Clock. Click on the clock face at the top right of the Bulletin homepage for an interactive timeline of the clock’s history and the reasoning behind each resetting.

It seems as though you’re trying to predict the future. What expertise do you have in forecasting? The Doomsday Clock is not a forecasting tool, and we are not predicting the future. Rather, we study events that have already occurred and existing trends. Our Science and Security Board tracks numbers and statistics—looking, for example, at the number and kinds of nuclear weapons in the world, the parts per million of carbon dioxide in the atmosphere, the degree of acidity in our oceans, and the rate of sea level rise. The board also takes account of leaders’ and citizens’ efforts to reduce dangers, and efforts by institutions—whether of governments, markets, or civil society organizations—to follow through on negotiated agreements.

The Bulletin is a bit like a doctor making a diagnosis. We look at data, as physicians look at lab tests and x-rays, and also take harder-to-quantify factors into account, as physicians do when talking with patients and family members. We consider as many symptoms, measurements, and circumstances as we can. Then we come to a judgment that sums up what could happen if leaders and citizens don’t take action to treat the conditions.

Isn’t the Doomsday Clock just a scare tactic used to advance a political agenda? Ensuring the survival of our societies and the human species is not a political agenda. Cooperating with other countries to achieve control of extremely dangerous technologies should not involve partisan politics. If scientists involved with the Bulletin are critical of current policies on nuclear weapons and climate change, it is because those policies increase the possibility of self-destruction.

The Bulletin has moved the Clock hand away from midnight almost as often as it has moved it toward midnight, and as often during Republican administrations in the United States as during Democratic ones. It moved the hand farthest away in 1991, when US President George H.W. Bush’s administration signed the Strategic Arms Reduction Treaty with the Soviet Union.

The Bulletin has been moving the Clock hand back and forth for 70 years and we haven’t blown ourselves up. Is there really that much to fear? As long as nuclear weapons exist and can be used, the risk that we could destroy civilization also exists. Such a calamity has not occurred because national leaders have so far heeded warnings, and because at critical times in the past 70 years, they have set up communication channels with adversaries, negotiated treaties to control the weapons, taken steps to radically reduce arsenals, and engaged erstwhile enemies in cooperative projects. Preventing nuclear war requires continued diplomacy, more exchanges of information, and open communications that engender trust.

Likewise, as long as Earth’s climate continues to change, we are at risk of suffering the potential consequences, in particular disruptions in the environment—such as extended droughts, changes in growing seasons, sea level rise, and fisheries die-offs—that threaten human survival.

Humans invented both nuclear weapons and the fossil-fuel powered machines that contribute to climate change; we know how they work, so presumably we can find ways to reduce or eliminate the harm. But we need concerted cooperation worldwide to prevent calamity.

Which is the greater threat: nuclear weapons or climate change? Each of these threats has the potential to destroy civilization and render the Earth largely uninhabitable by human beings. They are also intertwined: Some advocate for more nuclear power to reduce carbon dioxide emissions, but increasing the number of nuclear reactors, and the amount of enriched uranium and plutonium required for their operation, would also increase the risk of spreading nuclear weapons. Likewise, if we don’t reduce emissions, some natural resources, like fresh water, could become more scarce, leading to conflicts that might spiral into war and the possible use of nuclear weapons.

We can’t afford to address one threat without addressing the other. And in fact, the international cooperation required to reduce and prohibit nuclear weapons would likely also lead to cooperation to save us from deadly climate disruption. At the end of the day, trying to answer the question is like standing around in a burning house arguing about whether it is better to die of smoke inhalation or from a falling timber.

What can ordinary people do to meet the challenges that the Doomsday Clock is warning about? First, get smart about the problems. Nuclear weapons and climate change may seem to be outside our daily experience and beyond our control, but we all have a stake in avoiding untimely death. We want to live our lives free from destruction by nuclear weapons and from the growing scarcity of natural resources brought about by a warming planet. These interests in survival should motivate us to learn as much as we can about the powerful technologies that could destroy our way of life.

Second, share what you’ve learned with others—in your family, workplace, church, school, or social media feeds. The more we talk to each other about what matters most—surviving and flourishing—the more confidence we’ll have about expressing our interests.

Third, tell your government representatives that you don’t want even more of your tax money spent on nuclear weapons or on subsidizing carbon dioxide-producing fossil fuel technologies. Write letters, tell them at town hall meetings, email their offices, and let them know that your security depends on getting rid of nuclear weapons and on finding ways to keep our planet habitable for humanity.

Kennette Benedict is a senior adviser to the Bulletin of the Atomic Scientists and served as Executive Director and Publisher from 2005 until she retired in February 2015.  She is a Lecturer at the Harris School of Public Policy at the University of Chicago.

THE BULLETIN OF ATOMIC SCIENTISTS

by The Bulletin time to read: 7 min 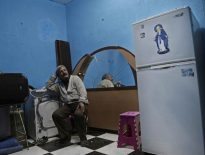 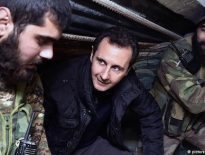 Features Iran’s Assad Regime
0
wpDiscuz
0
0
Would love your thoughts, please comment.x
()
x
| Reply
We use cookies to ensure that we give you the best experience on our website. If you continue to use this site we will assume that you are happy with it.Ok