Iran’s Revolutionary Guard General Hossein Hamedani who was killed in Syria on Saturday continues to receive praise by official media outlets and officials in Iran. But the story is very different in the virtual world. Because many Iranians and especially political, social, media etc activists recognize Hamedani as a key commander behind the violent crackdown that followed the rigged 2009 presidential elections, they used the social networks to express their disdain for the general. Social network users have been casting their “dislike” votes for the accolades that the official media has been pouring on Hamedani. These expressions of dislikes have spread so much and so quickly that media outlets associated with the Revolutionary Guards and security services have been forced to respond by calling the voters “negative voters,” “hypocrites,” (an offensive word used for the opposition group Mujahidin Khalq), “counter-revolutionaries,” “agents of imperialism,” etc.

Among the sites where the negative comments were posted, one stands out: Jamaran website. This site is closely associated with Hassan Khomeini, the grandson of the founder of the Islamic revolution and Islamic republic who carries weight in Iran’s political spectrum because of his lineage. The site allows its users to post their comments on Hamedani and the response has been to the dislike of the Guards. Tasnim website which is run by the Revolutionary Guards wrote, “The revolutionary activities of martyr Hossein Hamedani has dislodged the activities of the opponents of the regime such as the hypocrites and opponents, especially during the years of 1979 and 2009 and dried up the roots of their sedition. Because of this opposition media has tried to insult this martyred general. And in this endeavor, even the Jamaran Instagram site has aligned itself with these foreign media and has insulted martyr Hamedani. … This action by the site has brought forth displeasure among social network activists some of whom took action about it and advised the manager of the site. But the site continues to display the comments which are full of insults.”

The “dislike” votes on Fararoo website also prompted supporters of Hamedani to criticize and attack the operators of Fararoo. One of these supporters wrote, “Those who vote negatively deserve to one day become the servants of DAESH (Arabic name for the self-proclaimed Islamic State) America and al-Saud (the ruling monarchy in Saudi Arabia) because they do not understand how valuable individuals such as this great general are to our society. If they were not here, we would have – like many countries – hundreds of bosses over our heads. Go be ashamed of yourselves.”

Another defender wrote, “The ideas of Zionism have penetrated Iran as well, like many other parts of the world which shows that Zionists have acted successfully.” 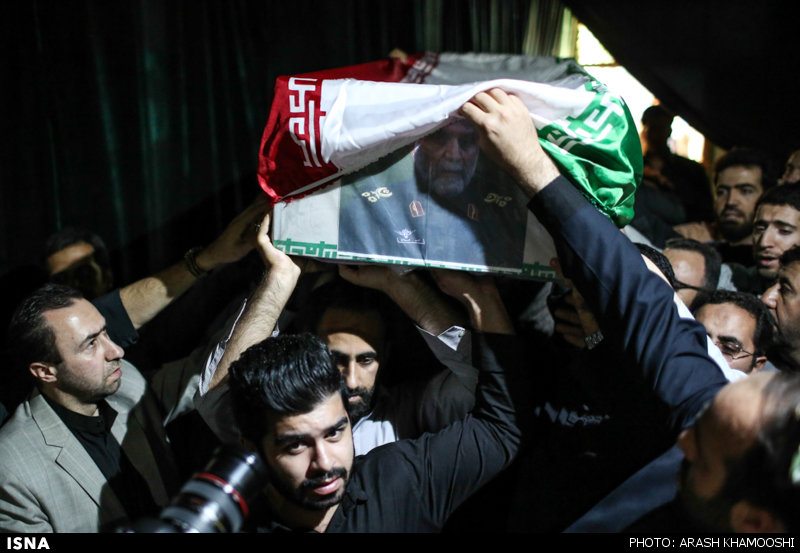 Titr News re-published Hamedani’s last interview about the events of 2009. The general openly says that they used “hooligans and gangsters” to crush the protests in that year. “We used intelligence to take measures whose news rapidly spread in Tehran. At that time, we identified about 5,000 individuals who were among rioters but who did not belong to any political party or group and put them under control in their own houses. When the protest demonstrators were called to come out, we had these people under control and so they could not go out and join the protestors. Then we recruited these very individuals. These three brigades showed that if we wanted to train mujtahids (warriors) we had to bring individuals who were familiar with knives and chains into the field. One of these individuals was a man named Satari. When he attacked people, he became 70% disabled and last year was martyred. When Tehran province’s security committee met that year (the day before Ashoora), everybody believed that Tehran would be quiet. I disagreed and said that events would take place. An emergency was announced. We rented all of Tehran’s cinema theaters, schools and mosques. Our kids came forward wearing black shirts. We had prepared thirty groups who were in contact with me. It was these three brigades that ended the sedition.”

One newspaper got into trouble after it had reported Hamedani’s death as a “death” rather than a martyrdom. The main headline of Royesh Mellat newspaper read, “General Hossein Hamedani was killed in Syria.” This prompted a number of hardline Majlis representatives to voice their opposition and call for some form of punishment for the managing editor of the paper. Afkar News wrote in this regard, “To everyone’s surprise, Royesh Mellat, which is a pro-reform newspaper, put out its main headline using the words of the BBC Persian service and Voice of America and wrote, ‘General Hossein Hamedani was killed in Syria.’ Our reporter has learned that some Majlis representatives want to issue a warning to the newspaper. The minister of culture has also been issued a reprimand and has been asked to suspend and shut the newspaper. They also plan to request the judiciary branch to take serious action regarding this insult.”

Hossein Nooshabadi, the spokesman for the ministry of culture responded. “A decision must be made by the Press Monitoring Group of the ministry. I have heard that the managing editor of the newspaper has already apologized for this, but certainly this is no enough. What the newspaper has done cannot be compensated by a simple apology. If one cannot say that the action was deliberate then one can believe that it was a mistake, for which the managing editor should be held responsible. At a time when the supreme leader of the Islamic revolution uses very honorable language for the martyred general this newspaper which is published in Iran posts this headline. This is unjustifiable,” he said.

This prompted the newspaper to again apologize and this time post a photograph of the general and titled its story, “Learn More About the Martyr of the Holly Place.”