Democratic lawmakers in Washington are demanding retaliatory measures against Saudi Arabia after OPEC, a bloc of major oil-producing countries, announced Wednesday that it will reduce oil production by 2 million barrels per day next month, strengthening Russia’s foothold in the global oil market. Americans could feel the effects of the decision around roughly the same time they will be casting their midterm ballots.

In a joint response, Democratic representatives Tom Malinowski, Sean Casten, and Susan Wild introduced a bill on Thursday that would pull US troops and weapons systems out of Saudi Arabia, the de facto leader of OPEC, and the United Arab Emirates, another top oil producer. “Both countries have long relied on an American military presence in the Gulf to protect their security and oil fields,” the three lawmakers wrote. “We see no reason why American troops and contractors should continue to provide this service to countries that are actively working against us. If Saudi Arabia and the UAE want to help [Vladimir] Putin, they should look to him for their defense.” After describing OPEC’s decision as a “turning point in our relationship with our Gulf partners,” Malinowski, Casten, and Wild demanded that the US start “acting like the superpower in our relationship with our client states in the Gulf.” 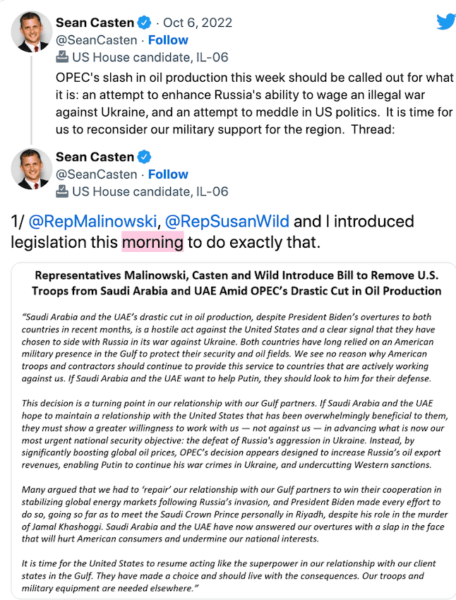 Likewise, Representative Ro Khanna, a California Democrat, told The Washington Post that “[Joe] Biden should make it clear that we will stop supplying the Saudis with weapons and air parts if they fleece the American people and strengthen Putin by making drastic production cuts.” The congressman further asserted that the Saudis “[need]us far more than we need them.” (The Gulf kingdom in part relies on US arms and military support in Yemen, where it has waged a yearslong war that’s reportedly led to hundreds of thousands of deaths.) Representative Ruben Gallego, the Democratic chair of the House Armed Services subcommittee, took a similar stance, urging the US to withdraw its Patriot missile-defense batteries, which have demonstrated mixed results in protecting Saudi Arabia from attacks launched on oil facilities and tankers in the Persian Gulf.

The OPEC cut could serve as a much-needed revenue boon for Russia, the world’s third-largest oil producer. To limit the resources that Russia can put toward its war effort in Ukraine, the European Union has spent the past month preparing to enforce a price cap on Russian energy imports to its member states. But OPEC’s sudden 2% drop in global oil production could counteract this plan by driving the price of oil up and making desperate consumers more reliant on Russian gas.

In remarks at the White House on Thursday, the president described OPEC’s decision as a “disappointment” but stood by his diplomatic visit to Saudi Arabia over the summer to address the energy crisis. “We’re looking at what alternatives we may have,” Biden told reporters while noting that his administration has yet to formulate an official response. “There’s a lot of alternatives. We haven’t made up our mind yet.” His comments come one day after White House press secretary Karine Jean-Pierre accused OPEC of “aligning with Russia.” Shortly before OPEC announced its decision on Wednesday, the White House reportedly sought to dissuade OPEC from production cuts, warning the bloc that such a move could qualify as a “hostile act.”

Meanwhile, Republicans are treating the cutbacks as an October surprise––one with the potential to shift the political winds back in their favor after a month that saw Biden’s approval numbers steadily increase. “Joe Biden caused this crisis with his destructive energy policies and foreign policies,” Senator Ted Cruz told Axios. “I’m deeply disappointed by the Saudi decision and wish they would act more like an ally during current conditions, but this is Joe Biden’s fault.” GOP representative Jim Jordan echoed, tweeting that the US would not “need to rely on OPEC if Joe Biden opened up American oil and drilled domestically.” With US gas prices hitting a new record high earlier this year, Republicans have used the issue as a political cudgel throughout the midterms, blaming the spike on Biden’s federal policies despite the numerous global factors that determine the cost of oil.