Just by getting rid of a dictator, Sudan’s protestors (as well as Algeria’s) have ended the new, counterrevolutionary normal in the Middle East

Edward Thomas has worked in Sudan and South Sudan as a teacher, human rights worker, and researcher for some 30 years. He is a fellow of the Rift Valley Institute and a research associate at the School of Oriental and African Studies in London. A specialist on Sudan, he is the author ofSouth Sudan: A Slow Liberation (Zed Books, 2015) as well as Islam’s Perfect Stranger: The Life of Mahmud Muhammad Taha, Muslim Reformer of Sudan (I.B. Tauris, 2010) and The Kafia Kingi Enclave: People, Politics and History in the North-South Boundary Zone of Western Sudan (Rift Valley Institute, 2013). He is currently working on a book about Islamism, neoliberalism, and social change in Sudan. Diwan interviewed Thomas in early April, to get his perspective on developments in Sudan following weeks of protests against president Omar al-Bashir, which led to his removal from office on April 11.

Edward Thomas: On April 11, former president Omar al-Bashir was arrested and replaced by a transitional military council, led by his minister of defence, ‘Awad ibn Auf. Bashir’s downfall began when a financial crisis last year undermined Sudan’s capacity to finance wheat imports, which pushed people onto the streets in December. The crisis was aggravated by advice from international financial institutions calling for an end to subsidies on bread and fuel. These subsidies formed part of the government’s rickety social contract with its main constituencies, concentrated in the provinces around the northern Nile Valley. Bread protests began in provincial towns around Khartoum, but they soon moved to the capital and turned into a judgment on Bashir’s three decades of rule.

Bashir dealt swiftly and ruthlessly with similar protests in 1992 and 2013. But this time, he and his ruling party hesitated to carry out massacres. One reason for their hesitancy was that the government was neither able to mobilize financial support for a resolution of the economic crisis, nor diplomatic support for a counterrevolutionary crackdown. Another was that Bashir appears to have lost his ability to manage the country’s many, sometime competing, security forces.

MY: Reports a few days ago mentioned that the army and the security forces were at odds over how to react to the protests? Is that true and what was the significance of this?

ET: A huge demonstration gathered outside the general headquarters of the Sudanese armed forces as of April 6, the anniversary of Sudan’s last successful popular uprising in 1985. Elements from the National Intelligence and Security Service, the main security agency of the government, and from shadowy militias linked to the ruling National Congress Party attacked the crowd, and army personnel—reportedly from the junior ranks—protected them.

On April 9 the commander of the Rapid Support Forces—a legally-constituted militia whose origins lie in the irregular forces organized by the government during the war in Darfur—told his forces in Khartoum that they should not intervene in peaceful demonstrations. The police reportedly issued similar orders the next day. All these developments suggest that different elements of the security forces were no longer under centralized command.

On the morning of April 11, the Sudanese armed forces announced that they would make a statement on the situation. The National Intelligence and Security Service said that it would release all political prisoners. This suggested that an entente among security forces has allowed for a palace coup, and coup leaders now have to formulate a response to the protestors’ demand for a transition to civilian rule. The leaders of the palace coup have all the cunning resources of the state at their disposal, but the protestors have the momentum (on April 12, ‘Awad ibn Auf stepped down as head of a transitional government to be replaced by General Abdel-Fattah Burhan, ed.).

MY: Who is most affected by Bashir’s departure, in the Arab world in particular?

ET: The dislodging of Bashir will demoralize the dictatorships of the Middle East and North Africa, and their international supporters. The Sudanese protests may have already done so, by providing the inspiration for protests in Algeria.

Is Sudan starting a new Arab Spring? Back in 2011, Sudan was preoccupied with the separation of South Sudan. Like Algeria, Iraq, and Lebanon, other countries with a history of civil war, Sudan did not rise up. There were several reasons for this. First, Sudan followed a path of market authoritarianism similar to Egypt’s and Syria’s, but market authoritarianism was managed differently in Sudan. There, economic pain had for years been transmitted to the country’s vast, diverse peripheries and managed by counterinsurgency techniques.

Second, many Arab governments licensed Islamist movements as the unofficial opposition to their authoritarian market systems. These movements, which were often allied with capital, promoted politically useful virtues of patience and obedience and lacked the capacity to critique the authoritarian market. However, in contrast, Sudan’s version of market authoritarianism was led by an alliance of Islamists, finance and merchant capital, and security forces, who managed to meld themselves into something which looked like a ruling class, and which made a fortune out the oil boom. Protestors shouted slogans against Islamists—the Sudanese Arabic slur for them is kayzan, which means water scoops or big dippers, a metaphor for greedy appetites.

Just by getting rid of a dictator, Sudan’s protestors (as well as Algeria’s) have ended the new, counterrevolutionary normal in the Middle East. The Sudanese protests were impeccably peaceful—protestors reportedly even intervened to protect members of the security agencies who were captured when trying to attack them. Sudan’s protestors may embolden citizens in Middle Eastern countries where repression has apparently foiled peaceful resistance.

The protests received almost no international media coverage and, before the Algerian uprising, little international support. The international human rights movement, which managed to get Bashir indicted for genocide by the International Criminal Court, was not able this time to mobilize much support. The European countries that led the campaign for Bashir’s indictment are no longer very interested in human rights in Sudan: They have used Bashir’s security forces to repress migration from Sudan and its neighbours. Even the United States, which has long used Bashir’s security forces to prosecute their war on terror, made more of an effort to help the protestors than the Europeans did. In a way, the International Monetary Fund also helped the protestors. That is because subsidy reductions always lead to bloody protests in Sudan, and in 1985 these reductions were implicated in the fall of the last government.

MY: How did Sudan avoid a civil war, in contrast to what happened in Libya and Syria, where dictators were challenged?

ET: Sudan’s civil wars began over three decades ago and spread across the vast, diverse, resource-rich peripheries—present-day South Sudan, Darfur, South Kordofan, Blue Nile, and eastern Sudan. Those wars are not really over. But the leaders of insurgent groups in Darfur and elsewhere declared their support for protestors in Khartoum, and the government declared unilateral ceasefires last January.

Since 1998, Sudan has had an elected presidency and parliament. But Bashir has been leader since coming to power in a 1989 coup. He appeared to have found a stable formula for repression in Sudan—relentless counterinsurgency in Sudan’s peripheries; resourceful and cruel security forces in the cities; and a total dismantling and cooptation of Sudanese civil movements, trade unions, media, and academe, which were all linked to Sudan’s influential Communist Party. He convinced Sudan’s urban population that he would massacre them if they opposed him, and repeatedly proved his resolve through mass killings and detentions.

The initial protests were led by people who could not afford bread. When these protests spread to the capital, they attracted support from professional associations. These associations played a leading role in the 1964 and 1985 uprisings which swept away Sudan’s last two dictators. The cruelty of the security forces worked against them: When they attacked hospitals and doctors treating injured protestors, they gave coherence and resolve to the opposition and helped them invoke the memories of past peaceful resistance.

The protestors have achieved a lot in four months. They have deposed a dictator and built a civil movement which can challenge the military. They have created a coalition of people who benefit from fuel subsidies—the precarious urban middle classes who had acquired televisions and air conditioners during the oil boom—as well as the beneficiaries of bread subsidies—the urban poor. They have the space to work with insurgents in the war-torn peripheries.

However, the protestors face many challenges. European policy toward Sudan is a contradictory mix of anti-migrant and anti-subsidy sentiment. Both Europe and the United States share interests with the security forces that manage Sudan’s crisis-prone market authoritarian system. If the protestors can use their momentum, their moral courage, and their luck to thwart the palace coup, they will still need to mobilize foreign support to finance Sudan’s food imports and its fuel and wheat subsidies. They need to find a way beyond the crisis-prone system and get rid of what is the most important subsidy in Sudan—the security force payroll—which may well account for half the national budget. 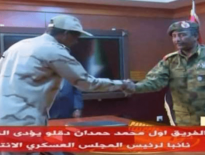 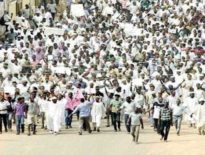 Headlines After Bashir’s Fall, What’s Next for Sudan?
0
wpDiscuz
0
0
Would love your thoughts, please comment.x
()
x
| Reply
We use cookies to ensure that we give you the best experience on our website. If you continue to use this site we will assume that you are happy with it.Ok