The official government news website IRNA said clashes in Sirjan were fierce. The report added that protesters tried to attack an oil depot with the intention of setting it on fire but the attempt “was unsuccessful” as a result of “reaction by security forces”.

Reports on social media spoke of one person killed in Sirjan. However, Radio Farda cannot confirm the claim. Videos circulating show at least one gas station being set on fire.

Saturday morning protesters came out in at least a dozen major cities across the country to vent their anger. So far, there were protests in at least 37 cities.

Fars news website, close to Iran’s Revolutionary Guards says protests in the oil-rich Khuzestan province and Sirjan in the southeastern province of Kerman were the most intense.

There were also sporadic protests in the capital, Tehran. Footage on social media shows a gas station was set on fire in one of Tehran’s major roads. Miles further, enraged Tehrani protesters attacked a police vehicle and overturned it.

According to the latest information received at 13:00 local time, protests have continued Saturday morning and early afternoon in several Iranian cities including the capital Tehran, where people blocked Shahid Baqeri and Ayatollah Kashani and Sattari highways.

In Tehran there was a surprising early snowfall, but throngs of people crowded several thoroughfares.

Internet outages were reported from various parts of the country. Authorities cut off internet access to make it hard for people and protesters to communicate and get organized.

The Islamic Republic introduced gasoline rationing and price hikes of at least 50% on Friday, triggering spontaneous protests and widespread anger over rising inflation despite President Hassan Rouhani’s promises that “the revenue would be used to help needy families.”

A video received by Radio Farda from Ahvaz, the capital city of the oil-rich Khuzestan province, southwest Iran, on Friday showed a tense situation.

Responding to Rouhani’s comment that the members of the lower classes of the society would benefit from the price increase, the protesters shouted, “Gasoline price went up, the poor just got poorer.”

While chanting anti-establishment slogans, the citizens of Ahvaz urged drivers to turn off the engines, block the roads, and boycott buying gasoline.

However, Reuters cited an “unnamed” resident of Ahvaz, as saying, “Riot police are out in force and blocking main streets. I heard shooting about an hour ago.”

The state-run television said the price of a liter of regular gasoline was increased to 15,000 rials (13 U.S. cents) from 10,000 rials and the monthly ration for each private car was set at 60 liters (about thirteen gallons). Additional purchases would cost 30,000 rials per liter (roughly $0.28).

In the meantime, a video circulated on social media shows Vakilabad boulevard in Iran’s second-largest city, Mashhad, crowded by enraged protesters, while the road was blocked by the riot police;

Hours later, people in the cities of Abadan, Dezful, and Shushtar, all in Khuzestan, also poured into the streets to protest the price hike.

Footage of protest in the city of Behbahan show enraged people chanting, “No to Gaza, no to Lebanon; I sacrifice my life for Iran.”

Many protesters believe that the Islamic Republic has increased the price of gasoline in Iran, while it is spending billions of dollars to support Bashar al-Assad in Syria, as well as militant forces in Gaza and Hezbollah in Lebanon.

Several witnesses told Radio Farda that the security forces disrupted or disconnected the internet in dozens of cities, including Ahvaz and Omidieh.

However, the state-run Iran Labor News Agency (ILNA) cited the speaker of the police and security forces, Ahmad Nourian, as saying that the whole country was calm and in peace.

Iran, which has some of the world’s lowest fuel prices due to heavy subsidies and the fall of its currency, has been fighting rampant fuel smuggling to neighboring countries.

As Protests Spread In Iran, Clashes Reported With Security Forces 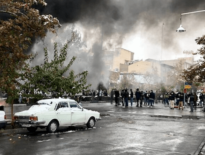 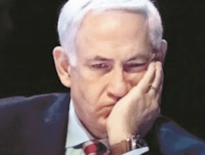 Headlines Maybe Netanyahu Is Just Sick of It All
0
wpDiscuz
0
0
Would love your thoughts, please comment.x
()
x
| Reply
We use cookies to ensure that we give you the best experience on our website. If you continue to use this site we will assume that you are happy with it.Ok