Coalition units and allied Yemeni forces have fought a successful and timely campaign to stem the al-Qaeda affiliate’s runaway growth in Yemen.

Over the past two weeks, U.S. airstrikes in Yemen have killed ten members of al-Qaeda in the Arabian Peninsula, contributing to an increasingly intense Gulf coalition effort against the group. AQAP has been a persistent menace since the early 2000s, exploiting periodic collapses of government military presence in the south and east. It has achieved unprecedented success during the ongoing civil war that broke out last year, capturing large amounts of military materiel, controlling a swath of terrain between the southern cities of Aden and al-Mukalla, and drawing resources from southern oil fields and ports. In response, the Saudi- and Emirati-led Gulf coalition fighting on the government’s side has been redirecting a significant portion of its military efforts toward the emergent AQAP enclave in the south, especially since the campaign to retake the capital from other rebel forces became bogged down by protracted peace talks. Alongside the U.S. strikes, Gulf forces have recently rolled back AQAP control in several southern cities, ports, and energy installations.

The current crisis is not the first time AQAP has made a major play to defeat Yemen’s military. In summer 2011, the group expanded as government forces fractured during the Arab Spring uprisings against then-president Ali Abdullah Saleh. The entire Yemeni 25th Mechanized Brigade was surrounded by AQAP militants in the southern city of Zinjibar and remained under siege until that September, when a multibrigade attack and U.S. aerial resupply drops relieved them — a three-week battle that claimed the lives of 230 Yemeni soldiers.

The situation was repeated on a larger scale in March-April 2015 as government forces collapsed in the face of advancing Houthi rebels and Saleh-loyalist army forces. AQAP cells and other local forces took advantage and surged from their support areas in the mountainous southern province of Shabwa to achieve a number of territorial gains.

First, they partnered with affiliated tribal militias to attack the 19th Infantry Brigade base in Shabwa, the 39th Armored Brigade base in Abyan province, and the 23rd Mechanized Brigade base in Hadramawt province to the east. In doing so, they secured T-55 tanks, M-46 howitzers, and Katyusha-type rocket launchers.

Second, AQAP and a coalition of local Salafi tribes operating under the banner of the Hadramawt National Council formally took over the provincial capital of al-Mukalla, which is a major port and Yemen’s fifth-largest city. In addition to looting the local central bank branch, AQAP fighters freed over 270 detainees, including Khalid Batarfi, who headed the group’s 2012 “emirate” in Abyan. AQAP then consolidated its position by overrunning several key locations within fifty kilometers of the city: the 27th Mechanized Infantry Brigade base; Riyan Air Base, headquarters of the 2nd Military District and home to the 190th Air Defense Brigade (giving the group access to operational S-75 Dvina medium-altitude surface-to-air missiles); and the Dhabah oil terminal at al-Shihr, Yemen’s main export terminal linked to the Masila oil field. Army forces soon turned the Masila field itself over to AQAP-aligned militias. Meanwhile, the Balhaf liquefied natural gas terminal was overrun by local tribal militias, some aligned with AQAP.

AQAP also moved quickly to carve out new operating areas around Aden, Yemen’s second-largest city and the seat of President Abdu Rabu Hadi’s restored government. In March 2015, a Houthi/Saleh assault on the city spurred the evacuation of the nearby U.S. counterterrorism and drone operating site at al-Anad Air Base, and AQAP exploited the resultant vacuum in subsequent months. Since mid-August, its fighters have openly operated in the Tawahi, Crater, Khormaksar, and Mansoura areas of Aden. They have also expanded their presence in Burayqah (Little Aden), site of the city’s main refinery and oil terminal, muscling in on the lucrative smuggling trade. In October, AQAP openly flew its flag over the Tawahi police station; its members have also distributed leaflets at local shops and Aden University demanding gender segregation. In addition, they tried to storm Aden’s 4th Military Region Command (MRC) and the Tawahi presidential palace in August.

Members of the Islamic State’s local “province” have conducted similar activities in Aden, albeit to a lesser extent and on their own (with some exceptions, AQAP largely ignores or tolerates the rival group’s relatively minor presence in Yemen). Along with regular “morality patrols,” they launched four suicide car bombs in October against Aden’s al-Qasr Hotel, the hardened compound housing the Gulf coalition’s local headquarters and the seat of President Hadi’s government. Fifteen coalition troops were killed in these attacks.

By year’s end, AQAP had begun a new wave of expansion, moving to consolidate control of the coastal corridor between Aden and al-Mukalla. On December 2, its “Sons of Abyan” tribal militia moved into Zinjibar and Jaar fifty kilometers east of Aden and set up checkpoints on the Aden-Abyan highway. And on February 10, AQAP took over al-Hawtah, the capital of Lahij province, dispersing pro-government militias and demolishing the local police headquarters. As a result, Aden was surrounded on the north and east, threatening coalition lines of communication and logistics between the city and the now-reopened al-Anad Air Base.

Preparations for the current anti-AQAP campaign began as early as April 2015 with the opening of quiet negotiations between the Gulf coalition and key tribes in southern and eastern Yemen. By February 2016, the coalition was engaged in a major military effort to clear AQAP from al-Mukalla and the Lahij-Abyan coastal corridor. 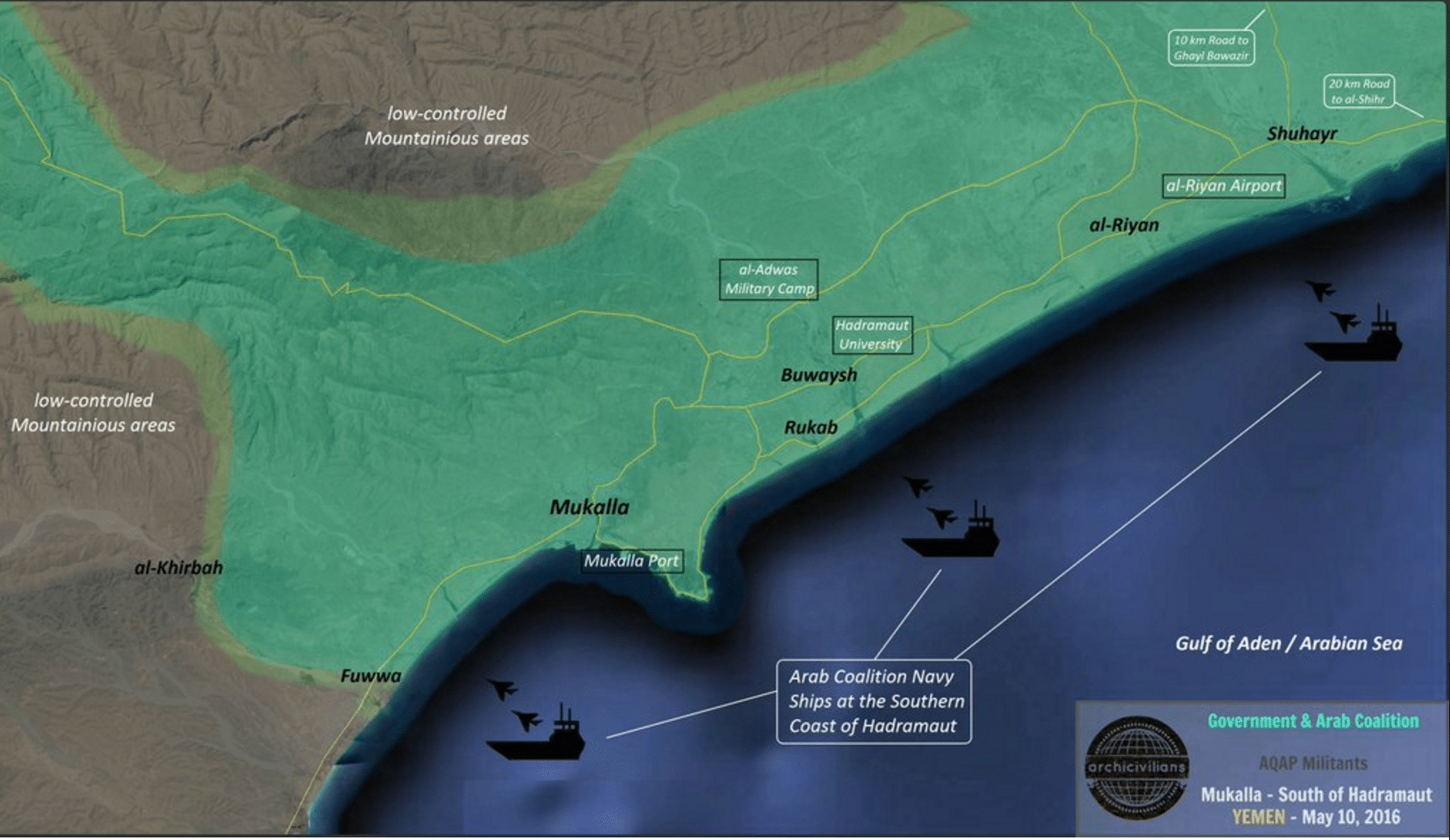 To facilitate the campaign, units from the United Arab Emirates have brought to bear many of the lessons learned during deployments in Somalia, Afghanistan, and Libya. In Aden, the coalition developed six 100-man units of local resistance fighters bolstered by UAE special forces, while Gulf intelligence agencies worked with locals to create an AQAP and Islamic State target list. In early March, coalition airstrikes hit AQAP’s leadership in Burayqah and in northern neighborhoods such as Salahuddin, Sheikh Othman, and Mansoura; on March 14, a UAE Mirage 2000 jet crashed in Burayqah during a low pass over Aden, reportedly downed by an AQAP 9K32 Strela man-portable air-defense system (MANPADS). On March 20, 600 Yemeni personnel mounted in UAE-supplied Nimr tactical vehicles launched ground operations against AQAP. With support from UAE Apache helicopters, they cleared the Mansoura district and dislodged AQAP fighters from their stronghold in the Mansoura central prison, killing an estimated 120 of them.

To the east, the coalition undertook a similar project in al-Mukalla, but on a far greater scale. A year ago, it began patiently developing a 10,000-strong force to recapture the city, including around 4,500 Yemeni army troops of the 2nd MRC, around 1,500 tribal fighters from the Hadramawt Tribal Confederation (HTC), and around 4,000 anti-AQAP rebels from within al-Mukalla itself. As in Aden, these forces eventually helped the coalition create a granular target list of AQAP operating locations, which were then hit by airstrikes and naval gunfire beginning on April 18, 2016. On April 20, army troops of the 1st MRC supported by UAE Apaches recaptured the PetroMasila oil facilities 190 kilometers north of al-Mukalla. And on April 23, the coalition launched ground operations to recapture the city itself and its nearby port and military bases. In two days of heavy fighting, AQAP tried to block the 2nd MRC and HTC forces from sweeping south into al-Mukalla, employing defensive positions on the three approach roads about 50 kilometers north. These blocking positions were defeated, allowing relief forces to link up with the anti-AQAP resistance inside the city on April 25, while UAE marines made ancillary landings along the coast to the east. An estimated 450 AQAP fighters were killed in these operations.

The campaigns in al-Mukalla and Aden have been complemented by follow-on efforts to prevent AQAP re-infiltration. Pursuit operations have spread east of Aden and west of al-Mukalla to break the group’s hold on coastal towns and roads, and internal resistance forces are being retained as local police, with salaries paid by the coalition for now. In addition, even before liberating certain neighborhoods, coalition forces covertly surveyed the essential services needed by local communities, enabling them to immediately distribute food from warehouses and dispatch reconstruction teams in AQAP’s wake to replace or improve on services the group and its tribal allies were providing.

Late last year, AQAP was poised to control Yemen’s second- and fifth-largest cities, plus its two biggest Indian Ocean ports and major energy installations. Yet the Gulf coalition forestalled that disaster through a prescient and patient buildup, followed by well-designed and decisive military operations. Since February, coalition and Yemeni forces claim to have killed 450 AQAP fighters in al-Mukalla, 120 in Aden, and 220 in other operations. If they can maintain such pressure, they can whittle AQAP back down from a quasi-government in the Islamic State mold to a highly dangerous terrorist group that deserves ongoing scrutiny.

Yet for all its potency, the Gulf coalition probably cannot maintain the current level of commitment indefinitely, and the military task of pressuring AQAP will grow more complicated if the group disperses into its mountain redoubts. The United States has acknowledged launching four airstrikes against AQAP since April 23, and it remains the only party capable of effectively tracking and targeting the group’s rural camps. The anti-AQAP campaign would also be better served if the stalled peace talks with the Houthis progress, since conflict termination is in the interests of all sides except AQAP.

Michael Knights is a Lafer Fellow with The Washington Institute. Alexandre Mello is the lead security analyst at the energy advisory service Horizon Client Access.