Having a permanent military foothold in the Gulf will put Turkey in an elite group of powers, but more presence also means more exposure, whether to Saudi-Iranian tensions or other local crises.

By Olivier Decottignies and Soner Cagaptay

In December, Ankara announced that it will establish a new military base in Qatar, putting Turkey in a small group of nations willing and able to project power in the Persian Gulf. As with France’s previous creation of a military base in the United Arab Emirates, the Turkish effort signals the willingness of Washington’s NATO allies to engage in the Gulf on their own. It also highlights the pairing of small but wealthy Gulf states with militarily powerful NATO countries in a series of nonexclusive partnerships, largely in anticipation of a resurgent Iran, among other perceived regional threats.

TURKEY AND QATAR: A SPECIAL BOND

To a certain extent, Qatar owes its existence to the special relationship it established with the Ottoman Empire in the late nineteenth century, when Anglo-Ottoman rivalry dominated Gulf politics. At the time, Qatar was a district under the Ottoman governorship of Najd, which itself fell under the Ottoman province of Basra. Elsewhere in the Gulf, Britain had established special relationships with the rulers of Kuwait and other emirates, drawing them into its sphere of influence and eventually opening the path to British control. A series of events in 1893 set Qatar on a different course, however.

That year, the Ottomans sent troops to Qatar to suppress local ruler Jassim bin Mohammed al-Thani’s opposition to Istanbul’s proposed administrative reforms. After the Ottoman forces were defeated, Qatar became an autonomous district in the empire, but also agreed to host Ottoman troops. Accordingly, the Ottoman military stayed in Qatar until the empire’s collapse in World War I — longer than in any other Gulf principality. Qatar’s autonomous status under the Ottomans also prevented its absorption into the expanding Saudi state between 1899 and 1926, despite their shared Wahhabi creed. 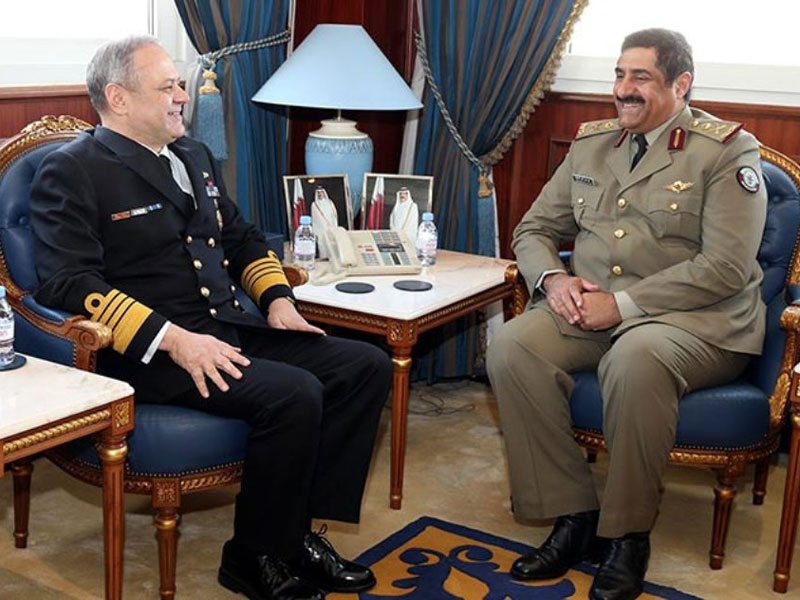 More recently, a shared political vision regarding the Middle East has helped bring the Turks and Qataris even closer. Since the rise of Turkey’s Justice and Development Party (AKP) government in 2002, Doha and Ankara have thrown support behind various Islamist parties in the region, often forming de facto alliances in places such as Egypt and Syria (sometimes against the wishes of Riyadh, another key regional partner for Turkey). In Syria, rebel brigades backed by Turkey and Qatar made significant gains beginning in spring 2015, only to be stopped by Russian airstrikes later in the year. And in the Palestinian theatre, both countries have supported Hamas, undermining the Palestinian Authority.

United by history and recent political developments, Ankara and Doha are currently in talks to sign a Status of Forces Agreement, laying the groundwork for a long-term Turkish military presence. The agreement will likely include a “casus foederis” clause stipulating that if one country is attacked, the other will come to its assistance. This would put Qatar in a special league in Ankara’s eyes. Apart from its NATO casus foederis obligation, Turkey has such arrangements with only two other partners: Northern Cyprus (which Ankara recognizes as a state) and Azerbaijan.

TURKEY WILL JOIN AN ELITE CLUB IN THE GULF

While the United States remains by far the largest provider of security in the Gulf, major NATO allies have been stepping up their presence. The French established a multipurpose air, sea, and ground base in the UAE in 2009, while British foreign secretary Philip Hammond took part in a groundbreaking ceremony for a similar project in Bahrain last November.

Key non-Western nations are also closing in on the region. Russia has deployed forces to Syria and established itself at bases in Latakia and Tartus, while China controls commercial operations at the Pakistani port of Gwadar, not far from the mouth of the Persian Gulf.

For its part, the Obama administration has pledged to refocus U.S. efforts toward the Far East and the Pacific Rim. This pivot and the nuclear deal with Tehran have caused anxiety among Arab Gulf countries contemplating the prospect of a resurgent Iran and still wary of Tehran’s nuclear ambitions.

Therefore, Turkey’s move in Qatar will make Ankara all the more valuable to its Arab partners, and to an American ally seemingly inclined to share the burden of Gulf security. The new base will also reinforce Qatar’s autonomy vis-a-vis Saudi Arabia. In addition, it could contribute to the security effort for the 2022 FIFA World Cup, a major and persistently controversial endeavor for Qatar.

In military terms, the base will give Ankara a variety of options in the region. Although the distribution of future Turkish facilities and the timeline for their completion remain undisclosed, the French experience in Abu Dhabi shows some of the benefits Turkey could derive. The French base is currently used as a launchpad for strikes against Islamic State positions in Iraq and Syria. It is also home to the French Naval Command for the Indian Ocean (ALINDIEN), and a key support point for naval operations in the Persian Gulf and Indian Ocean — including counterpiracy efforts along the Horn of Africa and elsewhere, to which Turkey contributes as well. In addition, the base has served as the backbone for expanding military cooperation with the UAE, a logistical platform for France’s disengagement from Afghanistan, a training ground for desert and urban warfare, and a showcase for French military hardware and technology.

Along similar lines, the Turkish base in Qatar will reportedly include army, navy, air force, and special forces components as well as trainers for the Qatari military, allowing Ankara to show off its military hardware and perhaps boost sales of its Altay tanks, Firtina self-propelled howitzers, and other arms. It will also give the Turkish military the desert training medium it currently lacks, allow Turkish naval forces to conduct counterpiracy and other operations in the Persian Gulf, Indian Ocean, and Arabian Sea, and perhaps serve as a hub for future Turkish operations overseas. More symbolically, the base will signal the Turkish navy’s return to the Indian Ocean for the first time since the 1550s, when the Ottomans unsuccessfully fought the Portuguese Empire for dominance there.

Yet more presence in the Gulf also means more exposure, especially in light of escalating Saudi-Iranian tensions in which Turkey is assuming a position closer to Riyadh. For example, forces stationed at the new base in Qatar would be within easy reach of Iran’s extensive missile capabilities. Thus far, Ankara and Tehran have maintained their economic ties and managed their political disagreements despite being rivals in Iraq and waging a proxy war in Syria. But the Gulf is a more volatile environment than Turkey’s land border with Iran.

Indeed, while Turks and Persians have not engaged in military conflict since the early seventeenth century, Tehran is sure to regard the new base as a hostile move, and a sign of Turkish alignment with the Gulf’s Sunni monarchies. Parallel indications that Ankara is normalizing relations with Israel are unlikely to improve the climate.

Finally, while a mutual defense agreement of the sort Ankara and Doha are contemplating is normally reciprocal, Turkey is much more likely to come to Qatar’s help than the other way round. The mere fact of maintaining a permanent military presence on such a tiny territory as Qatar means that Ankara will durably underwrite the emirate’s security. Even so, the Turks may still need an underwriter of their own. In a 2013 study on British military forces in the Gulf, Gareth Stansfield and Saul Kelly noted, “There is a danger that the deployment would be large enough ‘to get us into trouble’ but too small to get us out of trouble when it starts.” The same applies to the 3,000-strong Turkish deployment envisaged in Qatar. Although the North Atlantic Treaty does not extend collective defense to allied forces deployed in the Gulf, the United States has its own military headquarters in Qatar, as well as its largest air base in the Middle East, al-Udeid. Washington is thus in the same boat as Ankara and could become the Turkish base’s de facto guarantor.

Olivier Decottignies is a French diplomat-in-residence at The Washington Institute.  Soner Cagaptay is the Institute’s Beyer Family Fellow and director of its Turkish Research Program.