Israel is conspicuously out of step with its Western allies on the Ukraine-Russia war.

While the US and other NATO states have been forcefully denouncing Russian President Vladimir Putin and providing lethal aid to Ukraine, Prime Minister Naftali Bennett has avoided doing so, instead seeking to present himself as a potential mediator that both sides can trust.

Israel has also steered clear of anything resembling Western sanctions on Russian oligarchs, though Foreign Minister Yair Lapid has promised it will not serve as “a route to bypass sanctions.”

This policy has prompted repeated and bitter criticism from Ukraine, and even a warning from Israel’s closest ally, the United States. “You don’t want to become the last haven for dirty money that’s fueling Putin’s wars,” said US Under Secretary of State for Political Affairs, Victoria Nuland on March 11.

The desire to help the world end the fighting by mediating is an easily defensible motivation for Israel’s dissonant public position on the war.

But it isn’t the only one.

The driving concern, according to experts and the direct statements of leaders themselves, is the risk to Israel’s freedom of action in Syria.

“Israel effectively has a security border with Syria,” said Lapid on the fifth day of the war. “Russia is the most significant military power in Syria, and our cooperation mechanism with them assists in our determined battle against Iranian entrenchment on our border.”

The policy — putting Israeli security interests firmly ahead of any other concerns — is supported by a range of senior security experts in Israel.

“If in two years from now we sit under a barrage of Iranian-supplied high-accuracy rockets killing our citizens because we’ve been denied the capacity to prevent this from happening, that’s also a moral question,” said Eran Lerman, vice president of the Jerusalem Institute for Strategy and Security and past deputy national security adviser.

“The policy of caution that this government, especially the prime minister, is taking, is extremely important for national interests,” agreed Amos Gilad, a former senior military intelligence official.

Yet, while Russia is a powerful global player, and a dominant actor in Syria, Israel’s non-confrontational — even submissive — approach is not its only option. In fact, it runs against the legacy of Israel’s far more aggressive policy during the Cold War, at a time when the Soviet Union was more potent and hostile than Russia is today. 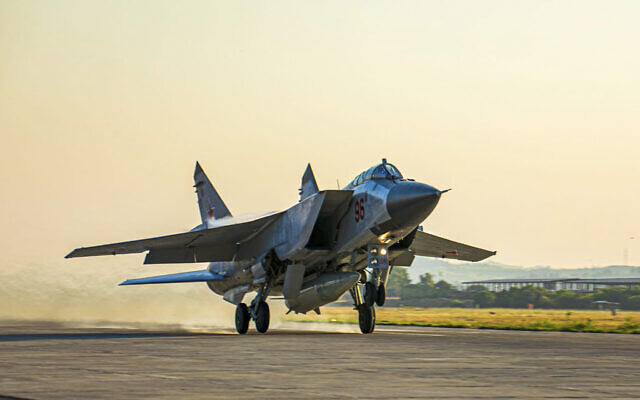 Illustrative: A Russian MiG-31 fighter jet carrying a Kinzhal missile takes off from the Hemeimeem air base in Syria on June 25, 2021. (Russian Defense Ministry Press Service via AP)

During the final year of the 1967-70 War of Attrition, Israel showed itself perfectly willing to risk killing dozens of Soviets, even ambush Russian pilots, in order to protect its red lines along the Suez Canal.

Today, however, Israel seems unwilling to risk clashes with Russians in Syria. Instead, it avoids criticizing Russia too harshly, protecting its coordination with Moscow over its northern border in order avoid any complications the Russians might introduce.

If history is any guide, Israel could follow other approaches.

Israeli military historian Yaniv Friedman examined Israel’s approach to the Soviet presence on its southern border from 1968-1970 in order to provide lessons for dealing with the implications of Russian forces in Syria today. He laid out his findings in a lecture at Yad Tabenkin in Ramat Gan in May 2019, underscoring how willing Israel’s military and political leadership was to risk direct clashes with Soviet forces in order to keep Egypt from moving its newest anti-aircraft batteries to the Suez Canal and limiting Israel’s freedom of action there.

With the signing of the 1955 Czech Arms Deal, the Soviet Union began supporting Gamal Abdel Nasser’s Egypt militarily. The relationship reached its climax in the late 1960s and early 1970s, during what Israel would later call the War of Attrition. Tens of thousands of Soviet military advisors, pilots, and soldiers — including an entire air defense division and possibly even an armored one — deployed to Egypt to aid Nasser in his fight against Israel. 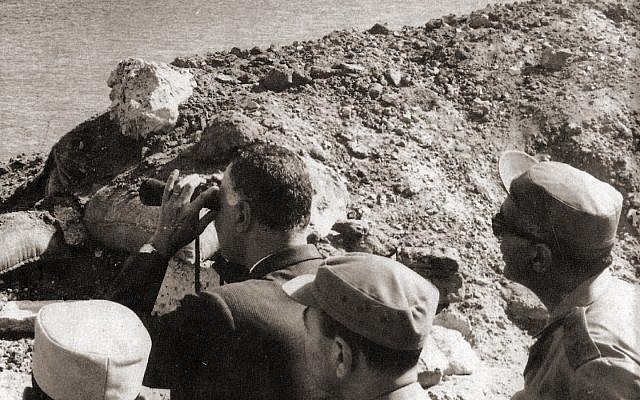 By 1968, there were some 3,000 Soviet “experts” in Egypt, primarily in the air defense network and in the General Staff. Israel’s Military Intelligence reported in February of that year that Soviet pilots were in Egypt, and were flying combat missions.

In 1969, in response to a worrying rise in IDF casualties on the Suez Canal, Israel decided to move out of its defensive posture. It began operating aggressively against Egyptian surface-to-air missile batteries in an attempt to prevent them from limiting Israel’s freedom of action in the air.

On September 9, Israeli armored troops masquerading as Egyptians raided down the Red Sea coast in Operation Raviv, killing up to 200 Egyptians.

They also killed two Russian soldiers, including a colonel. There is no evidence of any particular worry in the IDF General Staff when learning about the event.

The Soviet Union drastically increased its presence in January 1970, sending an air defense division to Egypt, alongside 70 MiG-21 fighter jets and 102 pilots.

As a policy, Israel sought to avoid Soviet targets that were too visible, to allow some measure of deniability and not force the Soviets to respond in order to save face on the global stage. In keeping with this policy, the IAF was perfectly willing to strike SA-3 batteries near the canal, but decided against targeting Soviet ships flying the national flag in the Port Said harbor.

But Israel was ready to strike Soviets if the need arose. “The operational policy is to avoid, as much as possible, combat with Russian pilots…” said Dayan in April 1970. At the same time, he stressed, “The establishment of SA-3 missile near the canal is not to be allowed… If a Russian plane there clashes with our pilot – our plane will fire in order to shoot it down.”

Indeed, over the summer, as Egypt advanced its anti-aircraft batteries toward the canal, clashes between Israeli and Russians became inevitable. On July 18, during Operation Challenge, Israel killed nine Russians, including an anti-aircraft battery commander, while attacking SA-3s. Soviet pilots became more aggressive as well, providing cover for Soviet pilots in sorties against Israeli positions in the Sinai.

Dayan, IDF chief of staff Haim Bar-Lev, and other government ministers agreed on an air ambush of Soviet pilots in order to convince the Russians that the price of protecting the anti-aircraft batteries was too high. On July 30, Israeli pilots attacked a radar station near Suez. Soviet jets fell into the trap, speeding to the area to engage the Israelis. The IAF swooped down on the MiGs, shooting down 5 enemy planes and killing 2 or 3 pilots.

Oddly, the Egyptians were pleased with the outcome. After Soviet pilots had mocked their abilities, Egyptian airmen felt no small amount of schadenfreude at watching the arrogant Russians being whipped so soundly by the Israelis.

The aggressive Israeli policy, though undoubtedly risky, had the desired effect.

“The Russians understood well that the conflict is not worth it,” said Friedman. “Humiliations, loss of prestige, and the understanding that just because Israel isn’t currently revealing to the world that it shoots down Russians doesn’t mean that it will always keep quiet. Further escalation could also bring the US into the theater, something that scared the Russians.”

A ceasefire with Egypt was reached in early August 1970, after Israel had clearly protected its red lines against a global superpower.

As it is now, during the War of Attrition Israel was caught between a healthy respect for — if not fear of — Russian power, and a determination to protect its interests over its border through military force.

“Israel recognized the difference in strength, but was self-confident and not afraid of confrontation when it was necessary,” Friedman said.

The lethal encounters with Soviet forces weren’t the first time Israel had clashed directly with global powers. Israeli pilots shot down 5 RAF planes in the War of Independence, struck the HMS Crane during the 1956 Suez Crisis, and killed 34 crewmen on the USS Liberty during the Six-Day War.

But all of those incidents were cases of mistaken identification. This was the first time that Israel intentionally attacked the armed forces of a global power.

There’s no question that Israel got away with it. 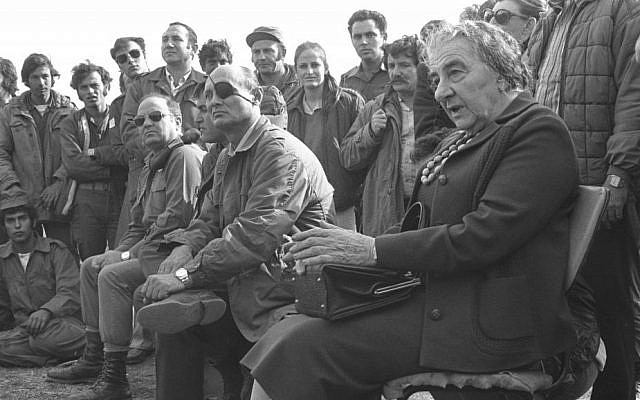 Israeli decision-makers understood then that even though the Soviet Union was far more powerful, Israel actually enjoyed an advantage in the Middle East. For Israel, the deployment of Egyptian anti-aircraft batteries struck at the heart of its most vital national security interests. For the Russians, on the other hand, the Middle East was one theater among many. Moreover, Israel’s entire force was located in the region, whereas the Soviet units in Egypt were comparatively weak.

Israeli leaders appear to see the situation differently today. The fear that Russia could drastically limit Israeli operations in Syria is the major driver of Israeli policy toward the war in Ukraine.

Russia could provide the Syrians with more advanced air defense systems, as it did in 2018 after blaming Israel for indirectly causing the downing of a Russian military cargo plane.

Even more alarming to Israeli leaders, Russia could engage Israeli pilots directly, forcing the IAF to turn back or risk direct clashes with Russian pilots or anti-aircraft missiles.

That prospect has been enough to force Israel’s hand on the major international issue in the world today, leaving Jerusalem in an awkward — even dangerous — position diplomatically.

As history shows, a more assertive, self-confident policy in the face of Russia’s presence in an enemy state is not out of the question, and could restore Israeli freedom of action in more ways than one.