After President Erdogan’s joint intelligence statement last week and Pro-Govt media reports of a possible Assad-Erdogan phone call, Turkish Foreign Minister Mevlut Cavusoglu in his last statement called Bashar al-Assad as “leader of Syria” and unveiled his talks with his Syrian counterpart. Having the support of the public and opposition, Erdogan’s government now faces huge criticism and protests from Syrian opposition side. Shaffaf investigated the motives of Turkey’s new approach and what will happen next.

Turkish FM Cavusoglu confirms that last year he held a brief meeting with the Assad Regime’s foreign minister Faysal Al-Miqdad in the Non-aligned Conference in Belgrade, signifying the first meeting of a top Turkish Official with an Assad regime official since 2011.

Speaking at the Conference of Ambassadors taking place in Ankara, the Foreign Minister said he told al-Miqdad that a political process was the only way to establish peace in Syria by bringing the government and the opposition together

“The territorial integrity and peace of Syria directly affect us. To prevent a split in Syria, there must be a strong government.”

The latest remarks by Turkish FM come after the Turkish President Recep Tayyip Erdogan says his Russian counterpart Vladimir Putin asked him to cooperate with Bashar al-Assad’s regime to resolve the Syrian crisis.

Intending to start another off-border military operation in Northern Syria to wipe off the YPG (Syrian offshoot of the Kurdistan Workers’ Party (PKK)), Erdogan on Saturday said he assured Putin that Turkish intelligence service is cooperating with the Syrian intelligence al-Mukhabarat:

“As long as the two intelligence services are working on the matter, we need Russia’s support, and there are agreements and understandings between the two countries in this regard.” 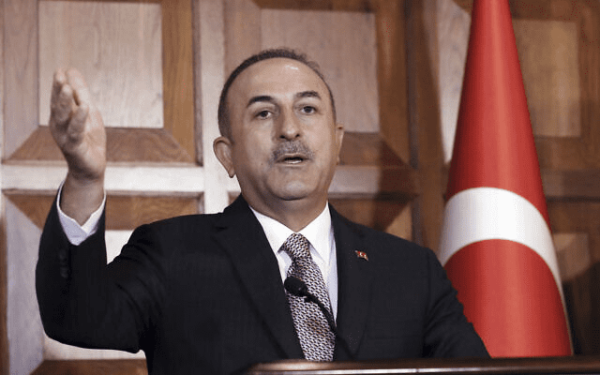 Meanwhile, Pro-Government newspaper “Turkiye” yesterday claimed President Erdoğan is expected to hold a phone call with Bashar al-Assad, adding that “A Gulf country and an Islamic Republic in Africa has taken the role of mediation traffic”.

Sources confirmed to Shaffaf that there is a possible move by Turkey to establish a mediation council of academics and experts intending to contact Ankara with Damascus. One of the possible names running the council is expected to be Samir Hafez, a Syrian-Turkmen politician and commentator who have been lately speaking to Turkish media regarding the necessity of rapprochement:

“Ankara-Damascus tension caused loss not only to Syria and Turkey, but also to the entire Islamic world, the ‘parenthesis’ that was opened between to capitals 12 years ago must be closed immediately.”

An indirect recognition of Assad’s legitimacy

Yet both sides ruled out the likelihood of a phone call. Speaking to Al-Mayadeen Television, a senior Syrian official denied the claim, saying “it would be completely wrong to talk about the possibility of contact between the presidents of Syria and Turkey.”

While Turkish FM Cavusoglu today uttering the same rejection, the name Assad was mentioned as a “leader” of Syria for the first time since 2011 in a top Turkish official’s statement:

“The possibility of a phone call between President Erdogan and Syrian LEADER Assad is not on the agenda.” 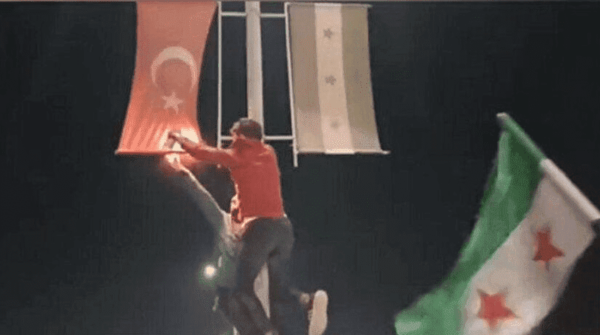 “The Syrian people will not accept compromise with a criminal terror regime and will continue to struggle to build a free and democratic Syria,” the Syrian National Coalition office said in a statement released yesterday.

Huge protests erupted in Northwestern cities Azaz, Al-Bab and Northern Aleppo in reaction to the comments by Turkish FM Cavusoglu.  Holding “Our resistance is not for sale“ signs,  a group of Syrian rebel burning Turkish flags circulated on social media and raised eyebrow in Turkey.

As rebels also gathered in Idlib for smaller protests, widespread anger towards Turkey was tangible on social media as well. George Sabra, a prominent Christian figure in opposition and the former head of Syrian National Council wrote on Facebook:

“If he (Cavusoglu) is interested in reconciling with the Syrian regime, that is his own business. But as for the Syrians, they have a different cause for which they have paid and continue to pay the dearest price.”

A written statement released by Foreign Ministry on mid-Friday, following the reactions from Syrian opposition side, interpreted the remarks of Minister Cavusoglu and emphasized the continuation of “solidarity with Syrian people”

But experts following the field say Turkey for couple of years have been “clearing the decks” for this turn towards Syrian regime.

“The latest statement today by the ministry is no different from the words of Cavusoglu. But Turkey’s approach to Syria has been like this for quite some time. I think the problem stems from the fact that Turkey does not fully express its understanding to the Syrian opposition.” said Levent Kemal, an experienced Turkish journalist following the Syrian conflict.

On Friday afternoon, a statement released by the main opposition party CHP (Republican People’s Party), the largest adversary of hostile politics against Assad, expressed “pleasure” towards dialogue attempts by the Government, also addressing the prospects of refugee matter:

“It is pleasing that the benefits of this approach, which we have been defending since the beginning, have finally been understood and that positive steps have been taken in this direction. Ensuring and encouraging the voluntary return of Syrians under temporary protection in our country is an approach we have advocated in terms of a peaceful solution to the dimension of the problem reflected in Turkey.”

This is not the first time Erdogan makes a 180-degree turn towards world leaders that he vilified for years.

Having severed ties with Egypt since the coup in 2013, Erdogan began the gradual rapprochement process through “cooperation between intelligence services,” and then a delegation from the Ministry of Foreign Affairs went to Cairo for diplomatic contacts in May last year under the leadership of the Deputy Foreign Minister. But Erdogan and Sisi have not had a direct meeting yet since. A source close to Turkish Foreign Ministry speaking to Shaffaf reckons that a possible Assad-Erdogan meeting will not happen anytime soon:

“It is one thing to make peace with a Gulf country, and another thing to reconcile with a regime who massacred relatives of 4 million people taking refuge within your territory. No doubt that this is an open space for provocation now. The protests we have seen in Turkish-held cities yesterday are not something we can see in Turkish streets, where the police brutality and injustice disinclines Turkish citizens from taking up and defy against violations. Yet this time the government will tend to show tolerance to angry Syrians”

Until the economic crisis, Erdogan could effectively instrumentalize his idealistic and aggressive foreign policy in shaping populist domestic politics. Yet problems in Turkey that Erdogan could no longer control, led to a more concessive foreign policy and fastened the necessary rapprochement with Saudi Arabia, Israel and the United Arab Emirates. Yet behind the step Turkey has taken toward Syria, there might be another matter damaging Erdogan’s popularity among the Turks: Syrian Refugees.

According to a poll conducted three months ago by MetroPoll company, %85 of Turkish people and %82 percent of AKP voters prefer Syrian refugees to be sent back to their country soon.

The opposition in Turkey, which has long been harshly criticizing the government over the plight of Syrian refugees, had repeatedly warned Erdogan to reconcile with Assad, an initial move to enable the “repatriation” process.

To ward off public pressure, Erdogan two months ago announced that the government was working on the “voluntary repatriation” of 1 million refugees to Northern Syria in the first phase, a step that failed to dampen the public criticism at the end.

As the general elections are only ten months away, Erdogan may attempt to put the main opposition’s post-election plan of “making a concrete peace/truce with Assad and sending the Syrians back gradually” into action this winter to regain his popularity.