April 23, 2020 was a landmark moment for those seeking justice for the ongoing conflict in Syria. It was on this day that the world’s first ever court case against the Syrian government’s alleged state-sponsored torture and killing of civilians was launched.

But the trial isn’t being held in Syria, or at the International Criminal Court in The Hague; this groundbreaking trial for one of the deadliest conflicts in recent history is being held in the German city of Koblenz, at the city’s Regional Higher Court.

The Rhineland may seem like an odd choice for a Syrian war trial, but it is taking place under Germany’s universal jurisdiction laws, which since 2002 have allowed its courts to prosecute war crimes, genocide and crimes against humanity charges committed anywhere in the world, regardless of whether there is a connection to Germany.

In the dock in Koblenz are two Syrian men accused of crimes against humanity: Anwar R and Eyad A. Most of the attention is on Anwar R, a former military intelligence officer charged with overseeing 4000 cases of torture, 58 killings and two cases of rape or sexual assault committed between April 2011 and September 2012. The panel of five judges is expected to give its verdict at the end of this year or in early 2022 (see our Koblenz trial overview below).

A tale of two Anwars

While the case is the result of an extensive international investigation carried out by a series of state prosecutors, NGOs and other parties, in many ways it has hinged on the chance meetings of two Syrian exiles – Anwar R, 58, and Anwar al-Bunni, 61 – in a story that has as many twists and turns as a Hollywood spy thriller.

The two Anwars, born just a few years apart, both studied law, but ended up on very different paths after graduation. Anwar R, from the Houla region of western Syria, became a police officer before moving into Bashar al-Assad’s intelligence services, while al-Bunni, from a dissident family 45km up the road in Hama, became a human rights lawyer, defending those firmly within the government’s crosshairs.

One of the more surreal moments came in late 2014. Just a couple of months after fleeing Syria for Germany, al-Bunni was shopping at a Turkish supermarket across the road from his refugee home in Marienfelde when he spotted someone. “I recognised the face, but I couldn’t figure out who it was,” he says. It was only later when talking to a friend that the penny dropped. The face belonged to the man al-Bunni believes abducted and interrogated him back in 2006, when he was kidnapped out the front of his Damascus apartment, blindfolded and dragged to a state security facility.

That man was Anwar R. It happened just days after al-Bunni, by then a well-known and well-respected lawyer, and several hundred other intellectuals signed the Beirut-Damascus Declaration. The petition called for Syria to respect Lebanon’s independence and sovereignty, among other things, but was seen in government circles as an unacceptable form of dissent. As a result, Al-Bunni was ultimately sentenced to five years in prison for “disseminating false information”.

Coming from a family of prominent left-wingers, it was by no means his first brush with the heavy hand of the law. In 1978, aged just 19, al-Bunni was arrested and held in an underground cell at Branch 251 – the same unit now under investigation in Koblenz – for a week. Here, he was given electric shocks and had his feet whipped with a cable. He says that between himself, his siblings and cousins, they have spent a total of 73 years behind bars.

Al-Bunni was released from prison in 2011, just as the now decade-long conflict – estimated to have claimed the lives of 400,000-600,000 people – was getting underway. However, as the violence escalated – with allegations of atrocities levelled against the government, rebel forces and Islamic militant groups – Syria became a much riskier place, especially for critics of the regime.

“It was getting very dangerous. Getting arrested, I don’t mind that. But my friend [the human rights lawyer]Khalil Ma’touq was arrested in 2012 and hasn’t been seen again,” he says, pointing to a poster of his friend on the wall of his Prenzlauer Berg office. “So it wasn’t just a question of prison or not going to prison; it was a matter of life or death.”

News in early 2014 that the security authorities had issued two fresh warrants for his arrest prompted him into action. After organising for his wife and three adult children to flee into Lebanon, al-Bunni went into hiding and set about planning his own escape. Thanks to a combination of blond hair dye, blue contact lenses, a fake ID and fading afternoon light, in August 2014 he managed to pass through the half a dozen checkpoints on the Syrian side of the border before crossing over into Lebanon. “It sounds funny now,” he says in his characteristically jovial tone. “But at the time it was tough.” After meeting up with his family in Beirut, he was able secure visas for them all to fly to Germany, where they claimed asylum.

It was around this time that Anwar R also made his way to Germany. After defecting from the Assad regime in late 2012, the former military intelligence chief fled to Jordan and joined the Syrian opposition in exile. It was through the opposition that he was able to secure a visa to travel to Germany in 2014, and he was later granted asylum.

As fate would have it, the two Anwars – now both running from the regime – were placed in the same refugee camp in Marienfelde. At the time, al-Bunni had just arrived in the country and had no idea about Germany’s legal system, so the prospect of prosecuting Anwar R didn’t even cross his mind. But he didn’t forget. He kept plugging away at his files for his Syria-based clients, opening the Syrian Centre for Legal Studies and Research in Prenzlauer Berg in 2015. When a year later he heard about Germany’s universal jurisdiction laws, he began collecting evidence of crimes committed in Syria and cooperating with the public prosecutor, giving his testimony about Anwar R to him.

“I know the victims personally, I defended a lot of them when they were arrested back in Syria,” he says. “Most of them are my friends, or I have very close connections with them.” While he doesn’t have a permit to practice as a lawyer in Germany, al-Bunni’s efforts have proved invaluable. “He has been amazingly important,” says Patrick Kroker, a lawyer at the Berlin-based NGO the European Centre for Constitutional and Human Rights (ECCHR), who is representing nine victims in the Koblenz case. “I don’t think the case would stand where it is without Anwar.”

In February 2019 both Anwar R and Eyad A were arrested and in October of the same year they were charged. This meant that 14 years after the abduction in Damascus and six years after bumping into each other in Marienfelde, the two men came face to face again – this time in Koblenz. But by now the tables had turned. It was al-Bunni who was helping the prosecution, and Anwar R was the one in the dock.

With all its complexities, the case has highlighted how Berlin has become a key battleground in the fight for justice in Syria. “The investigators can’t go to Syria, so the crime scene has, in a way, moved here,” says al-Bunni. With Assad still in control of the country and a huge number of Syrians moving to Germany in recent years, the city has become a new home for victims and alleged perpetrators alike.

“It’s important to communicate it in the right way, because more than 99 percent of the people have shown what they are running away from, but of course some people, like Anwar R, have taken advantage of the situation, and there will be more cases in the future,” says Kroker. In fact, the next case has already been identified. Alaa M, alleged to have been a doctor in a Syrian military intelligence prison, was arrested in Wiesbaden in June last year. His charges include one count of murder and 18 counts of torture. The trial is expected to begin in the first half of this year.

Although the Koblenz case has been a landmark for Syria, al-Bunni, Kroker and others ultimately have their sights set on the bigger fish in the Syrian regime, leading all the way to Assad. They are continuing to gather evidence, while European prosecutors have been steadily issuing arrest warrants against some of the government’s top brass. With most tucked away safely inside Syria, there is little chance of catching them anytime soon; however, al-Bunni says he’s happy to play the long game.

“It’s not my goal to catch them now. First, we want to charge them – as suspects, as perpetrators who committed crimes against humanity. My main goal is to stop any attempt to rebuild their reputation or to come back to the international community.”

Despite Assad’s government retaining control of the country, al-Bunni is adamant that he’ll be able to return home one day. “I haven’t learnt German yet because I don’t think I’ll need to; I’ll definitely be back home,” he says without hesitation. While eternally thankful to Germany (“a beautiful country with very kind people”), he knows his destiny lies elsewhere. “Our duty is to be there when they start to rebuild Syria.”

The Koblenz trial: The two men in the dock

The Koblenz trial focuses on two men: former military intelligence chief Anwar R, who was the leader of an investigative unit known as Branch 251; and Eyad A, alleged to have served in a low-level role under Anwar R.

While Eyad A is charged with aiding and abetting the torture of 30 people at Branch 251’s prison near Damascus, most of the focus is placed on Anwar R. As head of the unit, the 58-year-old is charged with overseeing 4000 cases of torture, 58 killings and two cases of rape or sexual assault committed between April 2011 and September 2012, during the early stages of the country’s civil war. It is alleged that some inmates were electrocuted, burned and beaten with cables and pipes, while others have claimed to have been hung from the ceiling by their wrists for hours on end, with just their tiptoes touching the ground.

While the prosecutors are trying to prove that the pair are guilty, they are arguing that the alleged crimes took place within Syria’s state torture system, rather than it being a case of just a couple of bad eggs. “Through this trial we’re not necessarily trying to expose Anwar R and what he did; we’re trying to expose the systematic torture and killing, not just in this branch, but all over Syria,” says Anwar al-Bunni, an exiled human rights lawyer who has helped gather evidence for the prosecution’s case from Berlin.

Anwar R has denied all allegations. During the hearing his lawyers read out a 45-page statement claiming that his superiors had stripped him of much of his authority in early 2011, before the period in question, and that he had in fact helped to facilitate the release of a number of prisoners before defecting from the regime in late 2012.

Anwar R’s lawyers were contacted for comment, but they informed Exberliner that they would not be making public statements until the trial is completed.

It is expected that the trial will be concluded towards the end of this year or in early 2022.

The Syrians in Berlin taking on the Assad regime

by Exberliner time to read: 8 min
Headlines The Pope Meets the Ayatollah 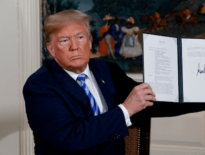 Headlines Don’t Expect Russia to Help Save the Iran Deal
0
wpDiscuz
0
0
Would love your thoughts, please comment.x
()
x
| Reply
We use cookies to ensure that we give you the best experience on our website. If you continue to use this site we will assume that you are happy with it.Ok