Opinion: The fight over control of strategic assets in Syria has gone up a notch after Russia expels pro-Iranian militias from Tartus port, ahead of Russian-American-Israeli summit over future of Syria and recognition of the regime by US, Israel in exchange for restricting Iranian activity in the country

Russian forces in Syria, aided by Syrian regime forces under their command, have in recent weeks expelled pro-Iranian militias that had taken over a civilian dock at the Tartus naval facility.

A year ago, during a visit by Iranian minister Amir Hatami to Syria, the two countries signed a military cooperation agreement. As part of the agreement, Syria authorized Iran to acquire a multi-year contract to manage one of the docks at the Tartus facility. Russia, however, vetoed the deal. 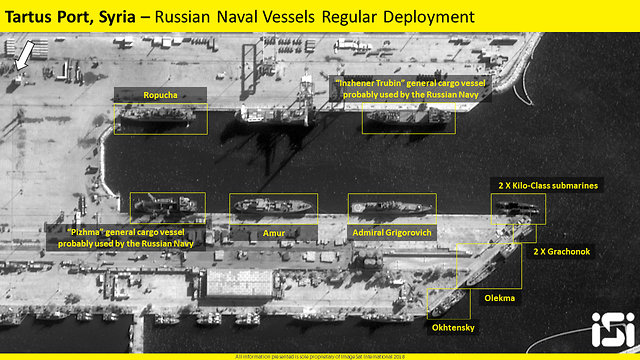 Recently, Iran has tried to implement the understanding reached with the Syrian government and stationed Shiite militias at the port in order to be able to supply Iranian forces in the Mediterranean Sea. In the past, Iran tried to convince Russia to cooperate with them at the Latakia port, which is run by the Russian Navy. The Russians categorically refused.

The recent Russian-Iranian dispute over the Tartus port is yet another episode in a series of clashes between the two nations over control over strategic, economic and political assets in Syria. The latest episode comes just before national security officials from Russia, the United States and Israel are set to meet this month in Israel, as Prime Minister Benjamin Netanyahu announced two weeks ago.

The international Arabic daily Asharq al-Awsat (“the Middle East”) based in London quoted this week “Western sources” reporting on the deal being stitched by the three national security advisers — Nikolay Patrushev of Russia, John Bolton of the US and Meir Ben-Shabbat of Israel — regarding the future of Syria. According to the deal, Israel and the US will commit to recognizing the legitimacy of the Assad regime, the US is expected to remove some of the economic sanctions imposed on Russia and in return, Russia will limit Iranian activity in Syria.

The summit was scheduled when Netanyahu visited Moscow ahead of the April elections. President Putin and the Israeli leader agreed to establish a regional workshop. The upcoming summit is the first phase of the scheme.

Meanwhile, there has been a change in Hezbollah’s attitude toward the regional talks being conducted by US envoy John Satterfield to determine the international maritime boundary between Israel and Lebanon. Until two weeks ago, every compromise offered by the Americans was thwarted by the Shiite terror group.

However, Hezbollah has since put forward a new condition for the renewal of talks: the inclusion of a UNIFIL delegate. Israel agreed. Israeli sources say that the reason Hezbollah has allowed the talks to go on is the severe economic crisis the Lebanese government, and Hezbollah, finds themselves in.

The Iranians have cut 50% of their financial aid to Hezbollah for 2019, and Western intelligence sources say that Iran warned the organization that the cuts will be even deeper in 2020.

As a result, Hezbollah was forced to make budgetary cuts across all its activities — that are not directly relate to preparing its forces for battle. Fighters salaries have been cut, stipends to families of its injured or killed were reduced and payment for Christians and Sunni Muslims working for Hezbollah were cancelled.

The Lebanese government is banking on exploiting the maritime gas fields across from the Lebanese coast to extricate the country from its financial troubles and Hezbollah hopes that a deal will allow for gas to be extracted as soon as possible. Israel believes that the emphasis the Iranian government placed on events for Jerusalem Day and the fiery rhetoric expressed by Nasrallah are intended to strengthen the morale of their people in the face of economic misery.