Trending
This report was produced with the Critical Threats Project. The insights are part of an intensive multi-month exercise to frame, design, and evaluate potential courses of action that the United States could pursue to defeat the threat from the Islamic State in Iraq and al Sham (ISIS) and al Qaeda in Syria. Related reports in the series are available here.
Key Takeaway: Syrian President Bashar al-Assad’s regime is neither sovereign nor a viable U.S. partner against ISIS and al-Qaeda. Russia and Iran have penetrated the Syrian Arab Army’s command-and-control authorities at all levels and propped up the force by providing the bulk of its offensive combat power. The pro-regime coalition cannot secure all of Syria and primarily serves as a vehicle for Moscow and Tehran’s regional power projection. Any U.S. strategy in Syria that relies on pro-regime forces will fail to destroy Salafi-Jihadists while empowering Iran and Russia.
Both former U.S. President Barack Obama and current U.S. President Donald Trump have considered deeper cooperation with Russia – and thereby Iran and Assad – against ISIS and al-Qaeda in Syria. This idea is based on two fundamental fallacies. First, Russia, Iran, and the Assad regime cannot recapture Salafi-Jihadist safe havens and secure them over the long-term given their severe manpower shortages and shortfalls in command-and-control. Second, Assad is not sovereign. Iran and Russia have both inserted themselves deep into the framework of the state. Both states aim to entice the U.S. into actions that advance their own strategic interests and ultimately facilitate the expulsion of the U.S. from the Middle East. 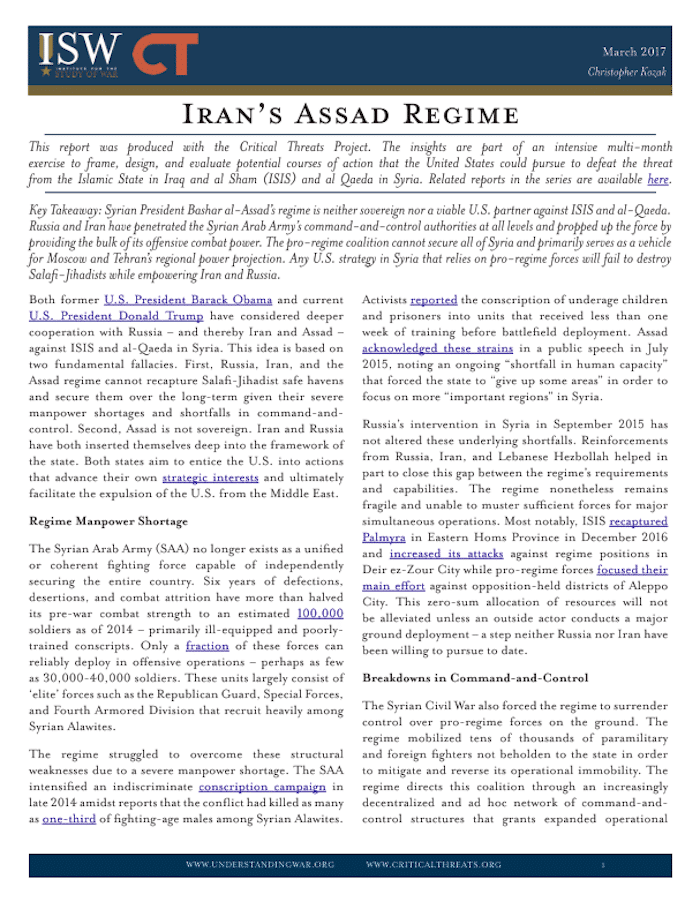