A prominent Lebanese journalist and Hezbollah critic pushed back against a common narrative in her home country where Israel is viewed as a source of tumult in the region, insisting Thursday that the Iran-backed terror group “is the bigger satan.”

“What Israel did in Lebanon is a drop in the bucket compared to what Iran does today to Lebanese civilians since 1982,” Maria Maalouf told the Kan public broadcaster during a first-ever interview with an Israeli outlet.

After thanking the Kan reporter for hosting her, Maalouf began with a disclaimer asserting that the interview should not be considered cooperation with the Israeli government, rather “openness.”

Israel and Lebanon are still technically in a state of war, extending back to Israel’s 1948 War of Independence. Israel invaded Lebanon in 1982 to put an end to Palestinian terror attacks being launched over the border and ended up occupying a security zone in southern Lebanon until 2000.

Israel also fought a bitter month-long war with the Hezbollah terror group in 2006.

Maalouf, 47, said she began her career in journalism working for a pro-Hezbollah news outlet, but after seeing the steep price Lebanese civilians paid in the 2006 war, she realized that the Iranian-backed group was not really about “resistance.”

“You realize that there is actually a bigger criminal, a bigger satan, and that is the one that causes all of the problems,” she told Kan, in reference to Hezbollah and Iran.

“What Israel did in Lebanon is a drop in the bucket compared to what Iran does today to Lebanese civilians since 1982,” Maalouf maintained.

Maalouf , from a prominent Maronite Christian family, left Lebanon in 2008, returning two years later to establish a new media outlet that took a critical line against Hezbollah. “I was the first to call Hezbollah a contractor company,” she boasted in the Kan interview, referring to its status as an Iranian proxy.

“If only I had the courage to blow myself up on [Hezbollah leader] Hassan Nasrallah in order to avenge the deaths of the Lebanese martyrs at the hands of the Iranian party,” she was quoted as having once said.

Maalouf accuses Hezbollah of murdering children in Syria, Yemen and Iraq as a result of its military efforts in support of Iranian interests throughout the region.

In 2017, she made headlines for tweeting, “If Israel considers Nasrallah to be its enemy, why doesn’t it carry out an aerial strike that will redeem us from him?”

Nasrallah is thought to reside in a secret bunker since the 2006 war, largely to prevent Israel from killing him.

Lebanese authorities subsequently issued a warrant for Maalouf’s arrest and accused her of colluding with Israel. The journalist had been in the UAE when she posted the tweet, but after receiving death threats, she decided it would not be safe for her to return to Lebanon.

She has remained abroad ever since and now lives in Washington.

“They want to put me on trial because I wrote something? My weapon is a pen, and apparently, a pen threatens Hezbollah more than a gun,” Maalouf told Kan.

Maalouf went on to call Nasrallah a “murderer” and said he is responsible for the deaths of over 200 Lebanese civilians in last year’s Beirut port bombing. Hezbollah has been accused of recklessly storing massive amounts of ammonium nitrate at the port, which detonated in August 2020, causing billions of dollars in property damages throughout the capital.

She accused Hezbollah, “the Iranian party in Lebanon,” of kidnapping her country in order to return the country to the “pre-stone age era.”

Asked about Abraham Accords normalization agreements that Israel began signing with Arab neighbors last year, Maalouf said it has given her reason for hope.

“After the Abraham Accords are actualized, Lebanon will also join them one day,” she speculated.

“I will return to Lebanon after Israel becomes a central player in assisting the Lebanese economy and we are rid of Hezbollah’s weapons, God willing,” she added.

Maalouf lamented the modern-day scenario where Lebanese civilians have to rely on Israel in order to learn where Hezbollah stores its weapons.

“This shows that Israel wants to open up to others,” she said.

Maalouf has also long been critical of the Palestinian leadership.

She said she’s gotten to know Jewish community leaders in the US and views them as those who “love the other, not like — and excuse me for saying this — the Palestinians, who only want to receive money from the Western world.”

While Nasrallah claimed recently that his group is at its strongest point ever with over 100,000 soldiers, Maalouf disputed the point, insisting that Hezbollah is in decline and that Lebanese civilians are beginning to protest in larger numbers against the terror group’s influence over the country. 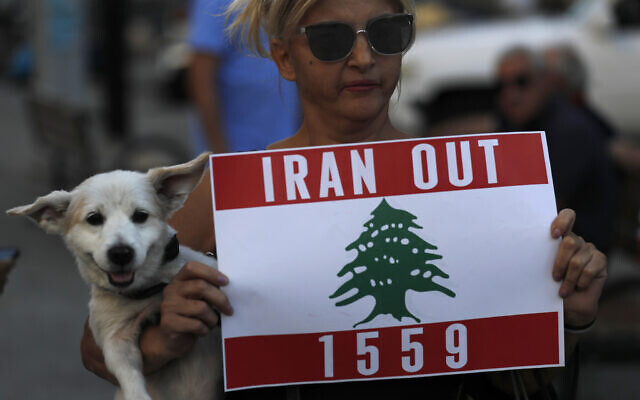 A Lebanese protester carries her dog and holds a placard during a protest against the Hezbollah terror group and the visit of the Iranian Foreign Minister Hossein Amir-Abdollahian, Beirut, Lebanon, October 6, 2021. (AP Photo/Hussein Malla)

Asked whether Israel might be able to provide Lebanon with economic aid as the country plunges further into economic despair, Maalouf admitted it wouldn’t be possible so long as Hezbollah remains a key authority in Lebanon because the terror group will never accept such assistance from the Jewish state.

“But we appreciate Israel’s intentions,” she said of recent proposals of assistance made by leaders in Jerusalem.

Maalouf said she’d love to come to Israel one day and visit sites like the al-Aqsa Mosque in Jerusalem and the Church of Nativity in Bethlehem.