The news announcement that Mehdi Karoubi – a leader in the protests against the 2009 presidential elections that reinstated Mahmoud Ahmadinejad in the presidency who has been under house arrest since 2011 – has once again brought his case to the forefront of the political discussions in Iran. The government spokesperson recently spoke of efforts by Rouhani’s administration to lift the house arrest for Karoubi, while the president’s brother visited the ailing cleric who also conveyed the greetings of the president to him. The media also reported that cabinet ministers of Islamic guidance and that of health both visited Karoubi.

Fatemeh Karoubi, Mehdi Karoubi’s wife told Saham News that the cause of the accident that her husband suffered was the temporary lift installed in their residence. According to her, the accident had cause the fractures in his left knee and the bones of his left leg.

She further said that after the accident, “the security forces inside the house” made their efforts, and added that an ambulance had taken Mr. Karoubi to the hospital where into which he was admitted and that Dr. Hashemi, the minister of health’s presence helped the situation.

This is the sixth time that Karoubi has undergone surgery. As reported in the media, he has undergone heart, eye, back, knee and prostate surgery in recent years.

Speaking to reporters Fatemeh Karoubi has further said, the lift that had been installed in their house was to help him with the difficulties that had emerged in the last three years of his house arrest. She specifically said that he had been deprived of access to fresh air during this period.

Speaking to Saham News she said that because of the surgery that her husband had a year ago on his knee and back, he hardly was able to use the foyer in the house, which was the reason for installing the temporary lift in the house.

The website of Etemad Melli (National Unity) party which is led by Mehdi Karoubi wrote that after the surgery President Hassan Rouhani’s brother visited Karoubi and passed the greetings of the president to him. Some media outlets wrote that minister of culture Ali Janati also paid a visit to Karoubi, as did the minister of health Hassan Hashemi.

During a news conference, in response to questions about the government’s measures to lift the house arrests, the spokesperson of Rouhani’s administration Mohammad Bagher Nobakht said that the government will take the necessary effective measures in this regard and would inform the public. “I stress that the president had not retreated from his promises,” he said reminding his supporters of the pledge that he made during his presidential campaign more than two years ago.

Rouhani himself had made some comments about the house arrests when he said, “Some issues are not in the hands of the government but conditions can be set for them,” adding that he has already undertaken some actions and would inform the public at the right time. He had clarified that the issue was pursued at the National Security Council sessions where in addition to the heads of the three branches of government security and military agencies were also represented and present and that a decision on this was a security political one. “This is clearly an issue beyond any single branch of the government.”

Mir-Hossein Mousavi, Mehdi Karoubi and his wife Zahra Rahnavard were arrested in February of 2011 after they invited the public to demonstrate in support of the Arab Spring demonstrations in regional countries.

Earlier this Persian year (which starts on March 21st), Karoubi’s son had publicly said that his father had not made any requests about the house arrest “but I am surprised that why is Mr. Rouhani, as the head of the national security council, so unresponsive about the house arrests. Karoubi’s wife too had lamented that lifting the sanctions was not a priority for the current administration.

Last year during a meeting with the Shahed parliamentary faction in the Majlis, ayatollah Khamenei had asserted, in response to a question about the house arrests by Ali Motahari’s question, a hardline representative in parliament, that these leaders had been treated leniently and that if ayatollah Khomeini had been alive, he would have been much harsher with them. He also said that if these individuals were tried, the sentences they would receive would be very harsh.

Greetings for Mehdi Karoubi from Rouhani 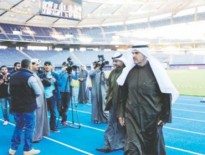 International Sports Jaber Stadium opening ‘a new start for sports’…
0
wpDiscuz
0
0
Would love your thoughts, please comment.x
()
x
| Reply
We use cookies to ensure that we give you the best experience on our website. If you continue to use this site we will assume that you are happy with it.Ok