MACOLIN, Switzerland (AP) — The sprawling American investigation of bribery and corruption in international soccer has reached into Asia and claimed the first guilty plea from a senior official in the new FIFA leadership.

A member of FIFA’s Audit and Compliance Committee, Richard Lai of Guam, was provisionally suspended Friday by the football organization’s ethics committee after admitting taking about $1 million in bribes, including from senior Kuwaiti officials seeking to buy influence among Asian FIFA voters.

Lai, a United States citizen and president of Guam’s soccer federation since 2001, pleaded guilty in Brooklyn federal court on Thursday.

Lai’s case marks a stunning step forward in the American federal investigation, which had indicted or taken guilty pleas from more than 40 people and marketing agencies linked to soccer in the Americas since 2015.

A Department of Justice document published Friday said, “co-conspirator #2 was a high-ranking official of FIFA, the Kuwait Football Association (KFA) and the Olympic Council of Asia (OCA).” The document did not name the alleged co-conspirators.

The unnamed Kuwaiti official was “ultimately elected to the FIFA Executive Committee,” the document said. 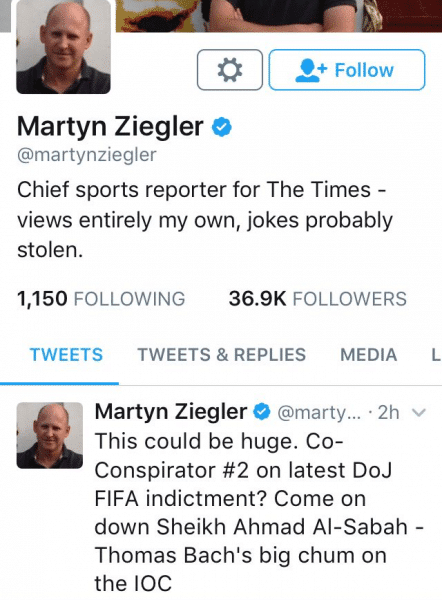 The Asian Football Confederation, where Lai is a long-time executive committee member, said it provisionally suspended Richard Lai from football with immediate effect.

Lai admitted to two counts of wire fraud conspiracy in connection with multiple schemes to accept and pay bribes to soccer officials.

The justice department document alleged Lai was approached by the Kuwaiti officials after a bitter Asian election in 2009 to choose a delegate to the FIFA executive committee. Lai had spoken out against the eventual winner, Mohamed bin Hammam of Qatar.

Lai “understood that at these meetings Co-Conspirator #3 or his assistants would offer or make bribe payments to these soccer officials,” the DoJ alleged

Lai was later wired hundreds of thousands of dollars to his accounts in Hong Kong and the Philippines by co-conspirator #3 through correspondent accounts in the United States.

The latest plea reaches deep into Asian soccer for the first time and involves an official who retained his position monitoring FIFA’s multi-billion dollar income and spending in the transition from former president Sepp Blatter to his successor Gianni Infantino.

“I would like to thank the American authorities for their continued efforts to stamp out corruption from football,” the FIFA president said in a statement. “I am happy to confirm once again, that FIFA will provide whatever assistance is needed by the U.S. and any other authorities around the world.”

FIFA, former senior officials including Blatter, and decisions to award hosting rights for World Cups from 2006 to 2022 are variously under investigation in the U.S., Switzerland, Germany and in France.

Lai’s 90-day interim ban by the FIFA ethics committee prevents him taking part in the world soccer body’s audit panel meeting on May 8 in Manama, Bahrain. Also that day, Asian soccer federations meet in the city to elect delegates to the FIFA Council.

Lai also pleaded guilty to failing to disclose foreign bank accounts and agreed to pay more than $1.1 million in forfeiture and penalties. The plea was entered before U.S. District Judge Pamela K. Chen.

Bridget M. Rohde, an Acting U.S. Attorney, announced the guilty plea and said it “marks another important step in our ongoing effort to root out corruption in international soccer.”

“The defendant abused the trust placed in him as a soccer official in order to line his own pockets. The defendant’s breach of trust was particularly significant given his position as a member of the FIFA Audit and Compliance committee, which must play an important and independent role if corruption within FIFA is to be eliminated.”

According to the criminal information to which Lai pleaded guilty, he received more than $850,000 in bribes between 2009 and 2014 from a faction of soccer officials in the Asian region in exchange for using his influence as a soccer official. The cash was intended to advance the interests of the faction that bribed him, including by helping officials in that faction identify other officials to offer bribes.

A U.S. Department of Justice news release did not identify details of the faction buying influence.

Lai also received $100,000 in bribes in 2011 from an official of the AFC who was then running for the FIFA presidency, in exchange for Lai’s vote and support in the then-upcoming FIFA presidential election.

Mohamed bin Hammam, the AFC president who was running against Blatter in that FIFA election, was later banned for life from soccer by FIFA.