Trending
People: Next Agreement Is On Civil Rights
by Fereshteh Ghazi

In their celebration of the Vienna nuclear agreement reached between Iran and the six major powers reached on Tuesday, one of the chants some people in the streets of Tehran shouted was, “The next agreement is for civil rights.” Videos on websites show various clips of people celebrating and at the same time calling for the fulfillment of their domestic civil rights. Another key call is for the “lifting the house arrest” of the three Green Movement leaders Mehdi Karoubi, Mir-Hossein Mousavi and Zahra Rahnavard who have been under house arrest since February 2011. Faezeh Hashemi, the daughter of prominent politician Hashemi Rafsanjani told Rooz that with the resolution of the nuclear issue, it was time for President Hassan Rouhani and his cabinet to seriously pursue the fulfillment of their other promises. 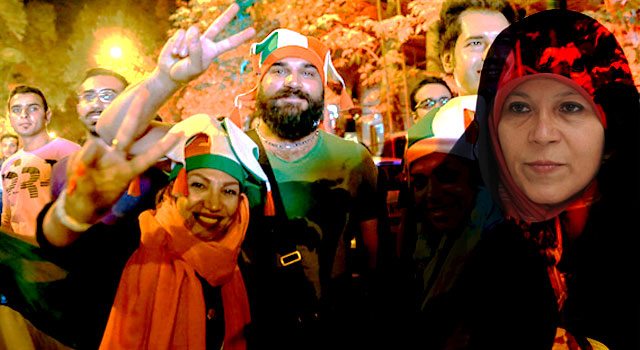 Supporters of the nuclear deal carried the message that Mousavi had proclaimed years ago, “Our victory does not translate into anybody’s defeat,” and attributed the success of the nuclear talks to the resistance and endurance of the three Green Movement leaders.

Opponents of the nuclear deal however, compared the agreement to the infamous Turkmenchai Treaty through which Iran lost much territory to Russia in late 19 century. They compared people’s celebrations to the joy that people displayed in their support of a soccer team from the Tabriz Tractor Manufacturing plant which was later announced to be a deliberate lie told to the people.

Rooz spoke with Faezeh Hashemi on her sense of the streets in Tehran and her own thoughts on the nuclear deal. “This was a great achievement and should not be underestimated. This is something that had to be done. With an agreement, conditions in the country would get even worse. We live in the country and see the conditions. Those who oppose this agreement and call it treason, have their interests tied to the sanctions. I do not view the opposition to be ideological. We see little ideological activities in recent years. Those who oppose the deal view their interests in creating animosity and having a permanent enemy. Their argument and beliefs are neither Islamic, nor Iranian or for the national interest. They oppose the deal because their interests are threatened. People are right in celebrating the event. It is people who have been dealing with these sanctions. People, society and the country has suffered,” she said.

This former member of parliament and the managing director of banned Zan magazine spoke on the impact of the agreement on other domestic issues and particularly political issues. “I do not see much positive connection between this agreement and domestic Iranian politics. I think in fact they work opposite each other. I suspect that those who claim to be concerned (there is a group in Iran called the Concerned who have been vocal in their opposition to the nuclear talks) are in fact a pressure group. They want to weaken people’s hopes. I do not think the political atmosphere will open up in other spheres and that people will be able to get their demands,” she said.

She continued, “Some members of Rouhani’s administration have been imposed on to him and do not speak to Mr. Rouhani’s calls. If he wants to fulfill the demands of those who voted for him then he must make some changes in his administrators. He must purge his team so that its members speak his language to fulfill his promises. This is what people expect. Now that the nuclear is resolved, the energy must be put into other areas such as release of prisoners, provision of a minimum amount of freedoms, prevention of unlawful acts committed by pressure groups and the Concerned group which disrupt legal gatherings and create supra-legal obstacles. It is true that he does not control them, but he can issue constitutional and legal warnings. He can make people aware and explain things to them. He needs to take positions over these issues. He has in the past but he has not affected results.”

She spoke about Rouhani’s critics and said, “I disagree with those critics who argue that Mr. Rouhani has not done anything on the domestic front and has focused on the nuclear issue. Mr. Rouhani’s situation must be understood. We know how power is distributed in the system. We know where authority is concentrated and who has how much power in other quarters. He has performed well in some areas and has not done much in others. I do not give a failure grade to the administration. We had good cabinet ministers such as the minister of science who took action and then we saw what they did to him. They impeached and removed him.

Speaking on the nuclear deal, Hashemi Rafsanjani said the agreement reminded him of the victory of Iranian forces in driving out Iraqi forces from the port city of Khoramshahr in the 8-year Iran-Iraq war and Iran’s acceptance of the UN Security Council ceasefire resolution that ended the war. “In those days, despite their animisoty and support for Saddam Hussein, they accepted Iran’s rights in the most international global organization,” he said.

The opponents of the agreement in Iran used their media outlets such as Raja news and belittled those who took to the streets to celebrate the agreement by comparing them to the supporters of a soccer team who were later told that they had been lied to.

Kayhan newspaper also wrote that the long conflict between Iran and the “bullies” would not end because of the talks and the agreement.

Iran’s official news agency IRNA announced that both US secretary of state John Kerry and Iran’s foreign minister Mohammad Javad Zarif had been nominated by the Swedish Nobel Academy to jointly receive the Nobel Peace Prize for 2016 for their efforts to reach a historic nuclear agreement.