INVESTIGATION – Tibetans, Uighurs and citizens of Hong Kong say they are being closely watched and harassed by China in France, the country which first developed the concept of Human Rights.

Threats of murder, telephone harassment, espionage and blackmail are part of the daily life of Chinese minorities exiled in France. The methods of bullying are the same for each community. Beijing’s objective: to intimidate and, above all, silence its disturbing nationals who could shake the image of a China whose image has been tarnished since the coronavirus crisis.

Oppressed in China, despised in France

“We know who you are, we will have your skin”. Tashi * did not know he was being followed. But he has been unable to sleep since a man threw himself on him in broad daylight at the Jardin des Plantes, threatening him with death while he was walking with friends, . Followed by incessant calls. A political refugee, Tashi planned to go to demonstrations to support the Tibetan cause. Harassed day and night, at the end of his nerves, he decided not to go to demonstrations any more. Like Tashi, Tenzin * claims to be the target of a vast surveillance campaign orchestrated by China. In France for 7 years, Tenzin has presided over the Tibetan community. Its objective: to defend  the cause of the Tibetans in the country of human rights. « I would like to express the suffering that Tibetans endure in Tibet,” he explains. Today, many are setting themselves on fire there, speaking out against Chinese oppression and the camps. It’s impressive. But here in the West, nobody talks about it, nobody reacts.”

Tenzin thought he was safe in France, but China quickly learned of his activities. His family, who remained in Tibet, was taken hostage: “Chinese police force broke into my house, took my family members one by one and questioned them about my activities in France. It lasted a month and a half, week after week. My sister and her husband begged me to stop my political activities. Faced with Tenzin’s family’s refusal to cooperate, the Chinese authorities then issued an ultimatum: if Tenzin refuses to stop his political activities in France, his family must pay a fine of 30,000 yuan (the equivalent of about 4,000 euros). Tenzin’s sister and her husband decided to pay. « The international community ignores us. States prefer to privilege their economic interests with China, they do not want to get into trouble », laments Tenzin. Céline Guy, press secretary to the president of the Tibetan government in exile, agrees: « The Chinese government is convinced that European countries will not compromise their economic interests (…) I was received everywhere, at the Quai d’Orsay, at the Élysée, in Matignon… When I enquired why we were not doing anything for the Tibetans who are being harassed in France, the answer was: “We have a special relationship with China ».

A hunt that is not limited to the 6,500 Tibetans exiled in France. Fleeing religious persecution, the Uyghur diaspora is equally closely watched: « China spends a considerable budget in order to carry out its digital « hunt » in France, says Dilnur Reyhan, teacher at INALCO and president of the Uyghur Institute of Europe. This activist is convinced that China « needs these surveillance activities to restore its image ». Chinese minorities abroad  a « threat » to China – they would risk denouncing « the daily violations of human rights in China ». Proof, she said, of China’s ability to export its repression to Europe.

Bullying techniques are now well known by Chinese minorities in France: « This can range from the delivery of (non-ordered) packages to the Chinese Embassy, ​​phone harassment, physical surveillance and even request to send personal and professional addresses », explains Dilnur. Sometimes their cars are damaged and the windows of their house are broken. But, more often than not, they receive mysterious calls at night.

Accused of being terrorists by China, some Uighurs are even contacted directly by their parents, through « shady » SMS. Adil, a member of this Turkish-speaking and Muslim minority, had lost contact with his family since his arrival in France. However, in 2017, he received a message on WeChat from his mother who lives in Ürümqi his hometown in in Xinjiang province: « Can you send me your address? Please send me a photocopy of your passport ». Everything was written in Chinese. A suspicious detail for Adil, who communicates only in Uighur with his parents. Then, nothing. Two years later, a month after a Uyghur demonstration at Place de la République in which Adil participated, he received a new message from his mother (still in his inbox): «  »Can you send me your work contract? Send me pictures of you ». Adil is convinced that his mother was coerced by the Chinese authorities. « I was photographed during the demonstration by a group of Chinese. They probably wanted to compare the photos to identify me », he says. For fear of reprisals against his family, Adil sent all that was requested. Since then, there has been no news. Dilnur agrees: “Non-collaboration can lead to the kidnapping of parents and relatives, who are then taken hostage ».

But Adil was not out of the woods. Since August 2019, he has received the same voicemail message, once a month, from an unknown number  – a cold, chopped female voice, asking him to go to the Chinese Embassy to pick up a package. “It is a trap, all Uyghurs know it. This automatic message is just to scare. It’s a way of saying “watch out, we’re watching you!”, Says Adil. A few days before our meeting, Adil was contacted by his brother, who lives in the United States. The latter had managed to talk to their mother in videoconference by WeChat. Silent, the mother showed a letter to her son, on which was written, in Mandarin: « Tell your brother to be very careful in France. He has to stop talking to the media ». The origin of these calls and messages remains unclear. Are they really made from embassies around the world, or could they be diverted calls, using VPNs- these tools that divert geolocation from one IP address to another, to prevent knowing the origin of a connection?

Less worried by Chinese intelligence services, citizens of Hong Kong are subject to a more discreet surveillance in France. However, when they arrive at the Chinese border, men in civilian clothes, presenting themselves as members of “Internal Security », « invite them to have tea », tells Le Figaro Tamara Lui, president of the Chinese association Chinese of France- French of China. Activist of Hong Kong origin, Tamara, over the demonstrations, notes that « chinese authorities are much more careful with the Hong Kongers”, being, according to her, “afraid of creating a diplomatic accident”. During the summer of 2019, while Tamara was preparing a new event, she discovered with surprise, on the home page of the consulate’s website, strange messages, all in Mandarin: “Attention, invisible forms are watching you, you you will be caught up by these imperceptible forces if you go to demonstrations »; or, « beware of separatists, do not allow yourself to be manipulated by this minority »; and, »the consulate does not endorse this demonstration ». A rhetoric of fear borrowed from “a vocabulary similar to that of the regime, that is to say riddled with innuendo,” assures Tamara. They will never clearly say “Don’t go.” Everything is implied, they use detours. But the message is clear: if you go, you are not in the same line as us, you are not our friend. And, if you are not our friend, then you are our enemy ».

“If I  defend the Tibetan cause, my family will pay »!

The Chinese government knows it: the most effective means to put pressure on the Chinese minorities in France remains the family. « The Tibetans are afraid for their loved ones, because often, as a punishment for their militant actions in France, the regime arrests all their families who have remained in Tibet », says Céline. Blackmail would is classic for the Chinese government. « If I want to defend the Tibetan cause here, my family will pay there,” agrees Tinzin, who has been working together with Céline for a free Tibet since 2013. « I would like to do more here for the Tibetans but I also think about my family and sometimes I give up doing certain things ».

Same apprehensions by the Uyghur community. Most of them are no longer in touch with their loved ones for fear that they will be sent to camps. The news are sparingly arriving via friends who stayed in China: « within the diaspora, according to a survey of 2,000 Uyghur internet users, 76% said they had at least one family member locked up in the camps, laments Dilnur. It’s a terrible situation. (…) Many are afraid to denounce what they are undergoing, fearing that China could attack their family members who remained in the country ».  Testimony after testimony, Tibetans and Uyghurs sing the same refrain: « We are not afraid for us, but for our families who have stayed at home ».

* The first name has been changed 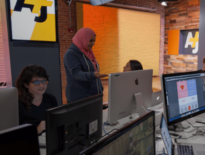 Headlines Document: US Congress leaders to Attorney General …
0
wpDiscuz
0
0
Would love your thoughts, please comment.x
()
x
| Reply
We use cookies to ensure that we give you the best experience on our website. If you continue to use this site we will assume that you are happy with it.Ok