This Isaac Marcosson article was originally published by The Saturday Evening Post on Nov. 20, 1923

It was the Turkish cabinet in session, and they were discussing the latest telegrams from Lausanne, where Ismet Pasha, minister of foreign affairs, and the only absent member, had, only the day before, delivered the Turkish ultimatum on the Chester Concession and the Turkish foreign debt. Economic war, or worse, hung in the balance.

As I advanced, Rauf Bey came out and escorted me into the room where the cabinet sat. There was a quick group introduction. I had eyes, however, for only one person. It was the tall figure that rose from its place at the head of the table and came towards me with hand outstretched. I had seen endless pictures of Kemal and I was therefore familiar with his appearance.

Rauf Bey introduced me to Kemal in the cabinet room. After we had exchanged the customary salutations in French he said, ”Perhaps we had better go into the next room for our talk and leave the cabinet to its deliberations.”

A butler, no less well groomed than his master, brought the inevitable thick Turkish coffee and cigarettes. The interview began.

“What is your ideal of government?” I now asked. ” In other words, do you still believe in Pan-Islam and in the Pan-Turanianism idea?”

“I will tell you briefly,” was the response. ” Pan-Islam represented a federation based on the community of religion. Pan-Turanianism embodied the same kind of community of effort and ambition, based on race. Both were wrong. The idea of Pan-Islam really died centuries ago at the gates of Vienna, at the farthest north of the Turkish advance in Europe. Pan-Turanianism perished on the plains of the East.

“Both of these movements were wrong because they were based on the idea of conquest, which means force and imperialism. For many years imperialism dominated Europe. But imperialism is doomed. You find the answer in the wreck of Germany, Austria, Russia, and in the Turkey that was. Democracy is the hope of the human race.

“You may think it strange that a Turk and a soldier like myself who has been bred to war should talk this way. But this is precisely the idea that is behind the new Turkey. We want no force, no conquest. We want to be let alone and permitted to work out our own economic and political destiny. Upon this is reared the whole structure of the new Turkish democracy, which, let me add, represents the American idea, with this difference—we are one big state while you are forty-eight. 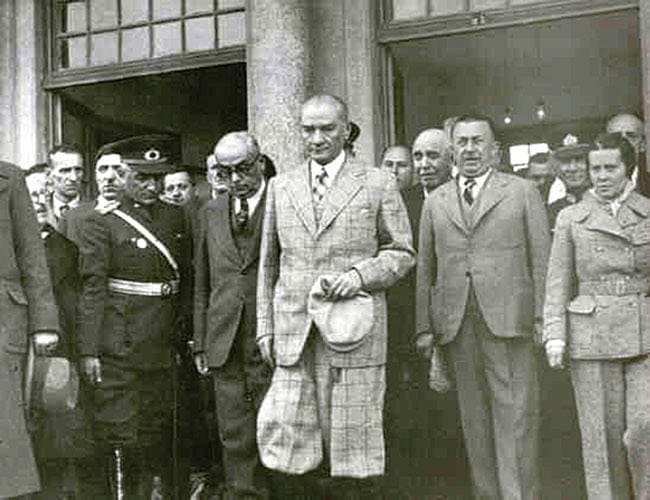 “My idea of nationalism is that of a people of kindred birth, religion and temperament. For hundreds of years the Turkish Empire was a conglomerate human mass in which Turks formed the minority. We had other so-called minorities, and they have been the source of most of our troubles. That, and the old idea of conquest. One reason why Turkey fell into decay was that she was exhausted by this very business of difficult rulership. The old empire was much too big and it laid itself open to trouble at every turn.

“But that old idea of force, conquest, and expansion is dead in Turkey forever. Our old empire was Ottoman. It meant force. It is now banished from the vocabulary. We are now Turks—only Turks. This is why we want a Turkey of the Turks, based on that ideal of self-determination which was so well expressed by Woodrow Wilson. It means nationalism, but not the kind of selfish nationalism that has frustrated self-determination in so many parts of Europe. Nor does it mean arbitrary tariff walls and frontiers. It does signify the open door to trade, economic regeneration, a real territorial patriotism as embodied in a homeland. After all these years of blood and conquest the Turks have at last attained a fatherland. Its frontiers have been defined, the troublesome minorities are dispersed, and it is behind these frontiers that we propose to make our stand and work out our own salvation. We propose to be masters in our own house.”

“The first and foremost idea of the new Turkey is not political but economic. We want to be part of the world of production as well as of consumption.”

Turkey to remember Atatürk on the 80th anniversary of his passing