As the UK and Gibraltar, its “overseas territory” straddling the waters connecting the Mediterranean and the Atlantic, stopped a supertanker bound for Syria, one of the first questions asked is why the vessel carrying Iranian oil was found a world away from its origin and destination?

A ship carrying cargo from Iran to Syria just needs to exit the Persian Gulf, circle the Arabian peninsula enter the Red Sea, pass through the Suez canal and duck at a Syrian port. That voyage would take 3,500 nautical miles; not exactly a day trip, but a short sailing distance compared with crossing oceans.

However, Grace 1, the tanker in question, took a different and much longer route circling around Africa on a 12,000 nautical mile journey to reach Syria, just as ships used to do before the Suez was built more than a century ago. 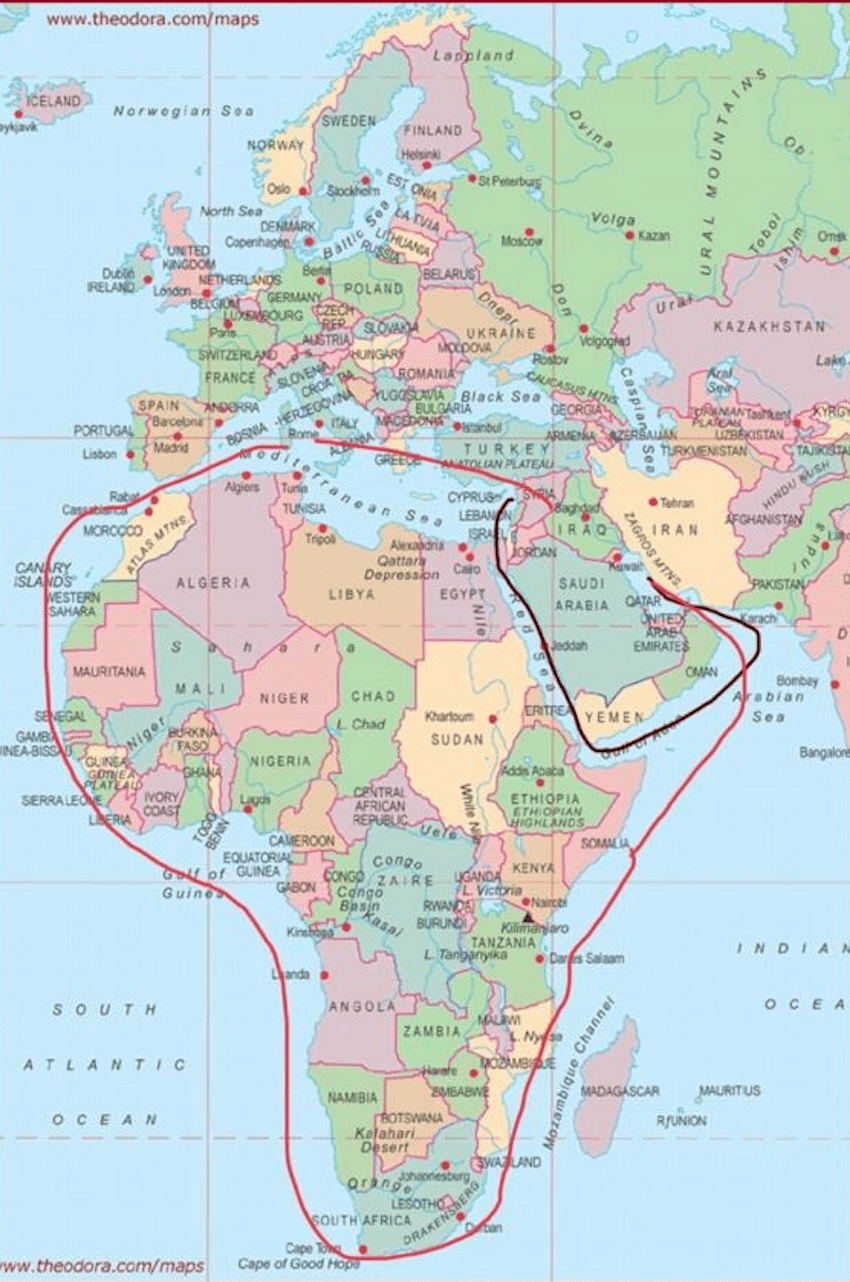 The route the tanker took has been confirmed by several tanker-tracking companies including Kpler, TankerTrackers and others.

Iran has been delivering cheap or free oil to Syria’s Bashar al-Assad for years, because Syria’s own modest oil fields are not in the hands of the Damascus regime.

Based on figures Radio Farda has received from Kpler, during January 2017 until October 2018, Iran has delivered 50,000 barrels of oil to Assad on daily basis. With average global oil prices that would come to about $3 million daily or more than a billion dollars annually; money Assad’s government does not have, given the ongoing civil war and a totally devastated country.

The flow of black gold to Syria, however, stopped in November 2018 when the United States imposed sanctions on Iran’s oil exports. Syria began having serious fuel shortages, with long lines of cars at gas stations in Damascus and widely reported by Syrian and Arab media.

Iranian oil shipments resumed in the past two months. Tanker Trackers reports that Iran has been delivering an average of 100,000 bpd of crude to Syria.

A recent report said that an Iranian tanker with one million barrels was waiting off the Syrian coast unable to deliver its cargo because an underwater pipeline delivering the crude a Syrian refinery had exploded. Syrian media blamed a “foreign power” for the explosion.

Later, Syria announced that the pipeline is repaired and TankerTrackers also confirms the stranded Iranian tanker finally offloaded its cargo on Tuesday, July 2, and another Iranian tanker was on its way.

It seems that so far most Syria-bound tankers carrying Iranian oil took the short route through the Suez. So, why did Grace 1 take the long route to reach Syria?

Usually, supertankers do pass through the Suez but they are never more than 20 meters submerged. If a tanker is heavier, it can offload some of its cargo before entering the canal, which is then pumped to the other side of the canal. However, Saudi Arabia is part owner of that pipeline and would not allow Iranian oil going to Syria to benefit from the facility.

According to TankerTrackers, Grace 1 was submerged more than 20 meters in water due to its heavy load. The capacity of the tanker is 2 million barrels of crude oil, which is lighter than fuel oil. Apparently, the additional weight, which submerged the vessel beyond 20 meters, was due to its cargo of fuel oil.

The other possibility, besides Saudi objections, is that the Egyptian pipeline bypassing Suez is not used for heavy fuel. It can carry light or semi-light crude.

The heavier fuel possibly carried by Grace 1 is used for ships or electricity power stations.

Iran has demanded that UK free the impounded tanker, but the decision to stop the vessel was based on EU sanctions imposed on Syria in 2011. So far, other EU countries have not spoken out much, whether they agree with Britain’s action.

Iran has been pressing the EU to show trade leniency in the face of U.S. sanctions and the Grace 1 incident might end up as a diplomatic hot potato for the EU. Iran has threatened that if Europe does not show a willingness to defy US sanctions, it will gradually end its implementation of the 2015 nuclear agreement; a move that might take Iran’s case back to the UN Security Council.