Trending
You are at:Home»Categories»Headlines»The Hind Gunship Is One of Syria’s Worst Terror Weapons
By War is Boring on 28 June 2016 Headlines

The Hinds dropped no fewer than 564 bombs over this period, underscoring the Mi-25’s reputation as one of Syria’s worst terror weapons.

The Mi-25 is often described as a “downgraded” variant of the classic Mi-24 gunship. It’s a big, heavy, fast and heavily-armed helicopter with armor protecting its cockpit and the most important parts of its engines.

Its major characteristics include its small stub wings, relatively slender fuselage and two separate cockpits in front of a big main cabin.

The major difference between the Mi-24 and the Mi-25 is that the latter is armed with four old, 9M17 Skorpion guided anti-tank missiles, known to NATO as AT-2 Swatters. The AT-2 is a radio-commanded anti-tank missile with a range of 3,500 meters that can reportedly penetrate up to 500 millimeters of armor.

While AT-2s are still in use in Syria, the Mi-25s’ primary armament consists of the Yak-B 12.7-millimeter machine gun that’s installed in a barbette under the front cockpit, plus up to four UB-32–57 pods for 57-millimeter unguided rockets or various bombs up to 500 kilograms in weight, for a maximum total of 2,000 kilograms.

According to official claims from Damascus — frequently cited in the Russian press — the Syrian Arab Air Force received its first batch of 12 Mi-25 helicopter gunships just in time for the Israeli invasion of Lebanon in June 1982.

The Mi-25s flew 93 combat sorties during that war — primarily against Israeli ground units in the Ein Zehalta area — and claimed up to 55 kills against tanks and other vehicles, supposedly without suffering any losses. At least that’s the story the Syrian government likes to tell.

The truth is that the first batch of Mi-25s entered service with No. 765 Squadron of the Syrian Arab Air Force only after the Israeli invasion, and saw combat in Lebanon starting in 1983. Damascus placed additional orders and up to 50 further gunships arrived by 1989, entering service with two additional units, Nos. 766 and 767 Squadrons.

During the same year, the former Soviet Union ceased supporting the regime of Hafez Al Assad, forcing it to ground most of the SyAAF. For much of the following 20 years, the service vegetated — a lack of money resulted in a shortage of spares and fuel, in turn ceasing all regular maintenance activity. A majority of pilots barely managed to clock 25 hours of flying every year.

The situation began to improve in 2006, when the Syrian government allocated the SyAAF funding for basic maintenance. Most of work of recovering the fleet was undertaken locally, with SyAAF’s ground personnel cannibalizing two or three helicopters to make one operational again.

Such activity enabled Mi-25-crews to fly at least 40 hours a year and thus remain current on the type. However, because of several fatal incidents, all flying at low altitudes was strictly prohibited, as was any activity related to developing and practicing new tactics.

The status of the SyAAF’s Mi-25 deteriorated again by 2008, when Damascus signed a contract with Russia for the overhaul of 36 helicopters. Plant 150 in Kaliningrad overhauled 20 of the Hinds and returned them to Syria before the unrest and uprising of 2011.

The re-delivery of four additional examples ran into trouble when the British insurance company terminated the insurance agreement for their shipment. The four Mi-25s eventually reached Syria. The 24 refurbished gunships enabled the SyAAF to keep at least two of its units — including the No. 765 and an unknown squadron — operational.

Through 2012, reports began to circulate that the regime in Damascus had ordered all SyAAF squadron commanders to bomb civilians in insurgent-controlled areas. Damascus instructed all commanding officers at first, and then all officers in each operational unit, to acknowledge the order with their signatures.

Although a majority of SyAAF pilots at that time were Alawite — there were by then very few Christians, Druze and Sunnis left with the service — the order met with strong dissent. Pilots who refused to obey the order disappeared. A few re-appeared after a week or two in prison, where torture was not uncommon. Others were never seen again.

This mistreatment led to surge in defections — not only by Sunnis, but foremost by Alawites. Tragically, regime agents retaliated against many defectors by kidnapping their families. Learning from this lesson, other aircrew continued to serve for a few months longer, preferring to find various excuses not to fly while searching for ways to bring their families to the relative safety of refugee camps in Turkey or Jordan prior to their own defections.

Nevertheless, a majority of Alawite pilots — raised to hate the Sunnis — continued serving and thus became involved in the regime’s campaign of annihilation targeting all opponents.

The circumstances under which the SyAAF has deployed its Mi-25 since the start of the Syrian civil war are therefore unique. Entering this conflict following a period of more than 20 years of neglect, sectarianism, favoritism and endemic corruption — and under the control of a merciless regime — the Syrian air force has long since abandoned any kind of normal operational behavior.

Contrary to standard practice in any other air force on the world, Syria’s notorious air force intelligence branch suppresses reporting on all incidents resulting from poor maintenance. After five years of intensive operations, the SyAAF’s Hinds and other aircraft are, once again, worn out. In recent months at least two air force helicopters literally disintegrated from vibration damage. It’s obvious that only the most fanatical supporters of the regime continue to serve.

Under such circumstances, the tactics of Syrian Mi-25 crews are unsurprisingly conservative. Instead of operating at low altitudes and combining the effects of their machine guns and unguided rockets to saturate air defenses in the target zone prior to deploying bombs, SyAAF crews are dropping their bombs from altitudes of more than 1,500 meters.

Because the air force has run out of stocks of conventional bombs, nowadays its Mi-25s often carry so-called “barrel bombs.” These are improvised explosive devices filled with nails and various metal trash — and TNT.

Few crews have extensive flying experience. Some managed to teach themselves how to operate their helicopters without the benefit of standard tactical manuals. Some use Google Earth for navigation.

Target selection is ad hoc. After five years of war, crew have abandoned all pretense of “precision.” In the words of several of SyAAF pilots, there is no other priority but to — literally — “cause mass destruction” and “burn Sunnis.”

The Hind Gunship Is One of Syria’s Worst Terror Weapons 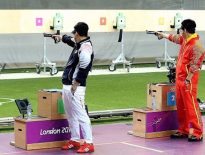 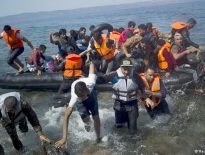 Headlines Key facts about the world’s refugees
0
wpDiscuz
0
0
Would love your thoughts, please comment.x
()
x
| Reply
We use cookies to ensure that we give you the best experience on our website. If you continue to use this site we will assume that you are happy with it.Ok