‘Cold-blooded killing of thousands of defenceless prisoners’ revealed
Hangings carried out in batches of 50 middle of night
Executions, mostly of civilians, part of deliberate policy of ‘extermination’
A chilling new Amnesty International report published today has exposed the “cold-blooded killing of thousands of defenceless prisoners” in a Syrian government jail where an estimated 13,000 people have been hanged in the past five years, and where mass hangings of up to 50 people at a time occur every week, sometimes twice a week.
The mass hangings have taken place at Saydnaya military prison near Damascus between 2011 and 2015 – and there are clear indications that the mass hangings are ongoing.
Most of those hanged were civilians believed to have been opposed to the government, with the killings taking place in great secrecy in the middle of the night. The executions take place after one- or two-minute lawyer-less “trials” using “confessions” extracted through torture.
Survivors of Saydnaya have also provided spine-chilling and shocking testimonies about life inside the prison. They evoke a world carefully designed to humiliate, degrade, sicken, starve and ultimately kill those trapped inside. These harrowing accounts (see below) have led Amnesty to conclude that the suffering and appalling conditions at Saydnaya have been deliberately inflicted on detainees as a policy of “extermination”.
Amnesty’s 48-page report – Human slaughterhouse: Mass hangings and extermination at Saydnaya prison, Syria – shows that on top of these extrajudicial executions the Syrian authorities are deliberately inflicting brutally inhuman conditions on Saydnaya detainees, with systematic torture, deprivation of food, water, medicine and medical care. The very few detainees who eventually leave Saydnaya often do so weighing half their body weight compared to the time of their arrival. Amnesty considers these practices to be part of a policy of deliberate “extermination”, with massive numbers killed as a result. Meanwhile, all detainees at Saydnaya Prison are forced to obey a set of sadistic rules, including absolute silence even when being tortured.
These practices, which amount to war crimes and crimes against humanity, are authorised at the highest levels of the Syrian government. 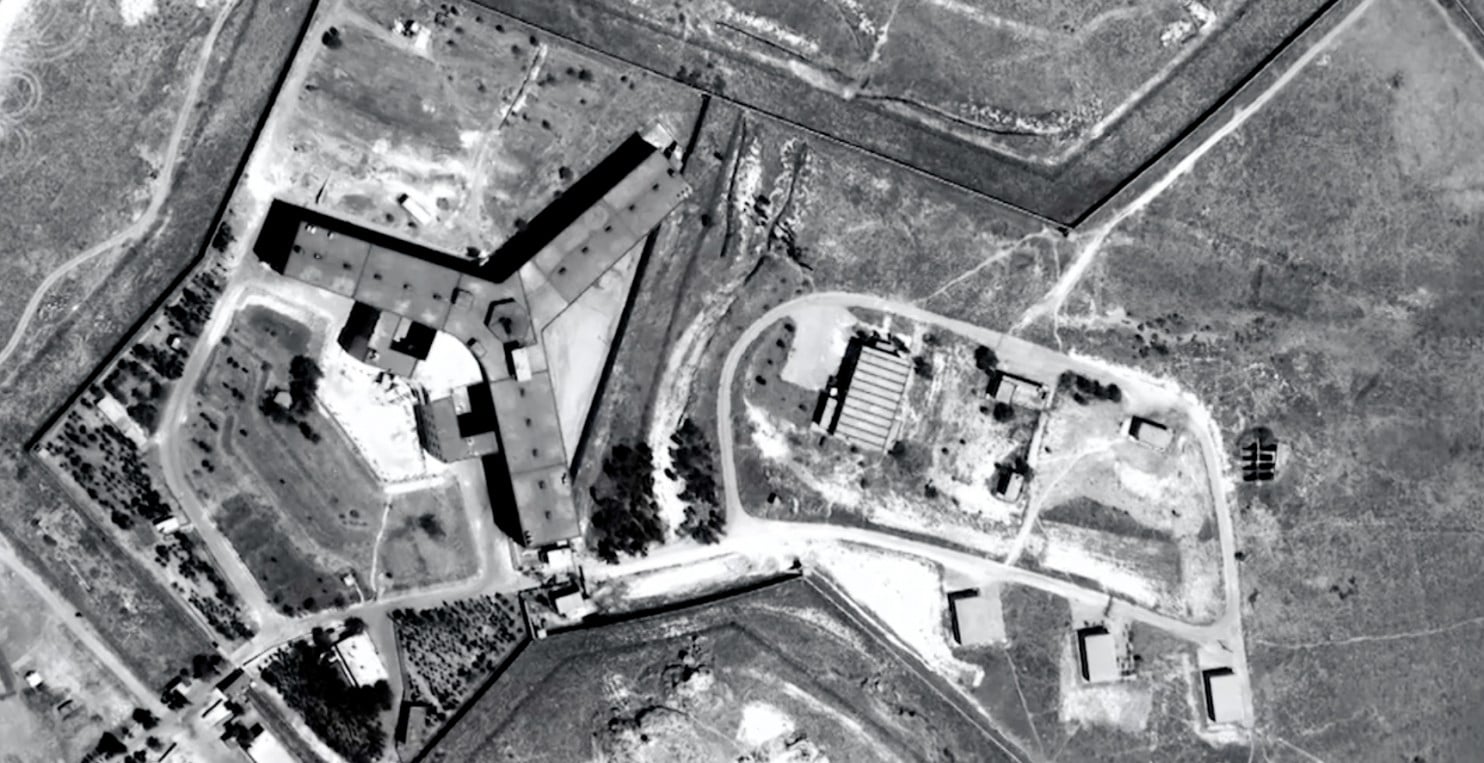 Following a year of research involving first-hand interviews with 84 witnesses (including former detainees, guards and officials), Amnesty has been able to establish that the Sadnaya hangings follow a set procedure. Carried out in the middle of night and often twice a week, usually on Mondays and Wednesdays, those whose names are called out are told they’re to be transferred to civilian prisons in Syria. Instead, they’re moved to a cell in the basement of the prison and severely beaten over the course of two to three hours (the intensity of the beatings is such that one former detainee described people “screaming like they had lost their minds”). The prisoners are then transported to another prison building (the “White Building”) on the grounds of Saydnaya, where they’re hanged in the basement. Throughout the process, they remain blindfolded. They are informed they have been sentenced to death only minutes before they’re executed, and they do not know how they are about to die until a noose is placed around their necks.
A former judge who witnessed the hangings said: “They kept them [hanging]there for ten to 15 minutes. Some didn’t die because they are light. For the young ones, their weight wouldn’t kill them. The officers’ assistants would pull them down and break their necks”.
Detainees held in the building on the floors above the “execution room” have reported that they sometimes heard the sounds of the hangings. “Hamid”, a former military officer arrested in 2011, said: “If you put your ears on the floor, you could hear the sound of a kind of gurgling. This would last around ten minutes … We were sleeping on top of the sound of people choking to death. This was normal for me then.”
After execution, the prisoners’ bodies are taken away by the truckload to be secretly buried in mass graves. Their families are given no information about their fate.
Last August, another Amnesty report on Sadnaya estimated that more than 17,000 people have died in prisons across Syria as a result of inhuman conditions and torture since 2011. However, that figure does not include the estimated 13,000 additional deaths as a result of the extrajudicial executions exposed in this report.
Lynn Maalouf, Deputy Director for Research at Amnesty International’s regional office in Beirut, said:

“The horrors depicted in this report reveal a hidden, monstrous campaign, authorised at the highest levels of the Syrian government, aimed at crushing any form of dissent within the Syrian population.
“The cold-blooded killing of thousands of defenceless prisoners, along with the carefully crafted and systematic programmes of psychological and physical torture that are in place inside Saydnaya Prison cannot be allowed to continue.
“Those responsible for these heinous crimes must be brought to justice. We demand that the Syrian authorities immediately cease extrajudicial executions and torture and inhuman treatment at Saydnaya Prison and in all other government prisons across Syria. Russia and Iran, the government’s closest allies, must press for an end to these murderous detention policies.
“The upcoming Syria peace talks in Geneva cannot ignore these findings. Ending these atrocities in Syrian government prisons must be put on the agenda. The UN must immediately carry out an independent investigation into the crimes being committed at Saydnaya and demand access for independent monitors to all places of detention.”

The role of the ‘Military Field Court’

Not one of the detainees condemned to hang at Saydnaya Prison is given anything that resembles an actual trial. Before they are hanged, victims are put through a perfunctory, one- or two-minute procedure at a so-called “Military Field Court”. These proceedings are so summary and arbitrary that they don’t even constitute a judicial process. The convictions issued by this so-called court are based on false confessions extracted from detainees under torture. Detainees are not allowed access to a lawyer or given an opportunity to defend themselves – most have been subjected to enforced disappearance, held in secret and cut off from the outside world. Those who are condemned to death do not find out about their sentences until minutes before they are hanged. One former judge from told Amnesty that the “court” operates outside the rules of the Syrian legal system:

“The judge will ask the name of the detainee and whether he committed the crime. Whether the answer is yes or no, he will be convicted … This court has no relation with the rule of law. This is not a court.”

Harrowing accounts point to policy of extermination Many former prisoners at Saydnaya said they were raped or in some cases forced to rape other prisoners. Torture and beatings are used as a regular form of punishment and degradation, often leading to life-long damage, disability or even death. The cell floors at the prison are covered with blood and puss from prisoners’ wounds. The bodies of dead detainees are collected by the prison guards each morning, around 9am. A former Saydnaya detainee “Nader” said:

“Every day there would be two or three dead people in our wing … I remember the guard would ask how many we had. He would say ‘Room number one – how many? Room number two – how many?’ and on and on … There was one time that … the guards came to us, room by room, and beat us on the head, chest and neck. Thirteen people from our wing died that day.”

Meanwhile, food and water are regularly cut off for prisoners. When food is delivered, it is often scattered over the cell floors by the guards, where it mixes with blood and dirt. Saydnaya also has its own set of “special rules”. Prisoners are not allowed to make any sounds, speak or even whisper. They are forced to assume certain positions when the guards come into the cells and merely looking at the guards is punishable by death.