Just as one was thinking that FIFA takes the prize as the most scandal-ridden international sports federation, well.. that might necessarily not be the case.

The International Shooting Federation, ISSF, which is among the 35 Olympic organizations, has a history that definitely rivals with that of the FIFA.

This weekend ISSF holds a congress in Moscow (this article was written on the eve of the Moscow meeting), but the delegates, including John Hansen, President of Danish Shooting Union, are not fully aware of what is going to take place in Russia.

Nothing has been announced, but John Hansen told Ekstra Bladet, that he will not be surprised if, at the weekend, ISSF suddenly has a new president. In fact this is what the rumours say. If this is true, it will be a straight coup over the heads of the many members of the Federation.

Ekstra Bladet is in possession of a number of documents from the international shooting environment which tells the same story: Namely that one of Russia’s richest men, billionaire Vladimir Lisin takes over the Presidency of the ISSF, although the election period of the current president, the Mexican Olegario Vazques Raná, runs out in two years.

But deeds from the past are catching up with the Mexican, who in cooperation with a German family in Munich has led the Shooting Federation since 1980.

Vasques Raná was elected president for the first time 36 years ago. At the same occasion Horst Schreiber was elected as Secretary General and the headquarters located in Munich, the home town of Schreiber.

The two made partnership until 2010, where Horst Schreiber died. However it did not made big changes in business processes. Franz Schreiber – the son of Horst – took over the post as Secretary General without any elections held.

Ordinarily Franz gets good help of his brother, Wolfgang, who controls the media activities of ISSF. The wife of Franz – Brigitte Schreiber – takes care of the daily operations at the headquarters, as well as she is responsible for the operations of the Federation.

Last year, the organization Play The Game made a study of the situation in the 35 federations that represent the Olympic family. The study took starting point in transparency, the democratic process, cash flows and solidarity. ISSF became number 35 and last. Failed on almost all parameters.

Not many know what is going on in the Shooting Federation, apart from Vasques Raná and the Schreiber family. Although the Federation annually receives millions in subsidies from the IOC. But the federation doesn’t have public accounts, neither does it publish the audit reports. 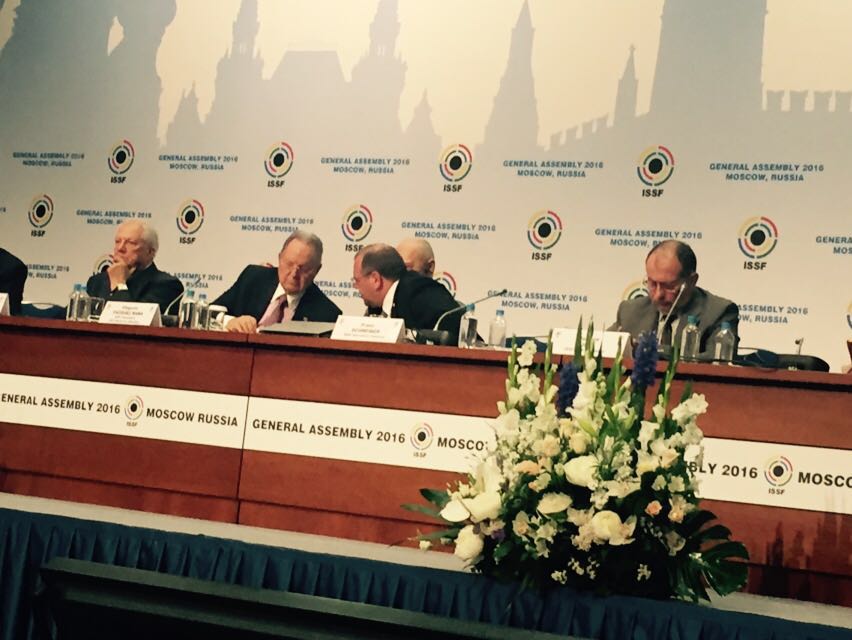 After being slapped by Play The Game and after the many cases in FIFA and other associations , the IOC tightened the requirements for the 35 federations at a board meeting last December .

By the end of 2016, all must have introduced reforms which implies transparency, democratic elections and auditing that meet international standards.

The Danish Shooting President will not complain if Lisin takes over the presidency.

– We really need new times. ISSF is very closed, and if there shall be transparency, it requires that the current president steps down. We don’t even know what’s going to happen at the congress. And originally it was not planned to take place in Moscow, but in Rio, the host of the Olympics.

– But they cancelled the Rio for economic reasons. The hotel rooms were too expensive. Instead it was suddenly moved to Moscow, but I don’t know who is going to pay, says John Hansen.

He also says that he and his Nordic colleagues have repeatedly tried to promote democracy in the ISSF, but it has been difficult to change anything.

– We can live with Vladimir Lisin as a new President, because it will give us a hope for more openness, and in any case he is a man who is passionate about the sport.

If Lisin, as expected, becomes the new president of ISSF, it will probably also secure him a seat in the IOC, where the Russians already have three seats. It is a part of President Putin’s policy, that Russia must gain as much power as possible in the international sports organizations.