Amman — On normal days, the tiny, gas-rich nation of Qatar looks like a giant construction site. Dozens of hotels and sports stadiums are being constructed, along with a world-class transportation infrastructure that includes a 47-mile metro system and miles of brand new roads. Most of these massive projects were scheduled to be finished in time for the 2022 Football World Cup, which Qatar was controversially awarded to host.Qatar sits on one of the world’s biggest natural gas reserves, so securing financing for the projects was never an issue. The biggest challenge was acquiring the manpower to build and oversee all the work. Like most of its neighbors, Qatar is heavily dependent on foreign labor, mainly workers from Asian and East African countries.Less than 10% of Qatar’s nearly 2.5 million inhabitants are Qatari nationals. About 600,000 blue-collar workers, mostly young, single non-Qatari men, labor away to build Qatar’s legacy.In color-coded uniforms, the workers are bussed onto the construction sites in the morning. In the afternoon the laborers are delivered back to huge camps, built specifically to house them, on the outskirts of the capital, Doha.The labor camps have long been criticized by human rights groups for overcrowding and poor living conditions. Now, according to a health expert with the World Bank, due to those conditions, “this is fertile ground for transmission of COVID-19.”

“The increase was relatively slow in the first few weeks. Then it started to rise almost exponentially from one week to another,” Dr. Sameh El-Saharty, Lead Health Specialist at The World Bank, said recently at the Brookings Doha Center. “These transmissions were mainly among migrant workers, and for obvious reasons.”

Since Qatar’s first few cases of COVID-19 were confirmed in March, the numbers have mushroomed to almost 29,000 in less than two months. The cases have spread across all of Qatar’s population, and while officials don’t give precise breakdowns of where they are, it’s clear many are inside the labor camps.

Authorities moved fast to contain the spreading virus by locking down the country and isolating the entire industrial area where the laborers live.

An official from the Qatari Government Communications Office told CBS News the country has, “implemented wide-ranging containment and prevention measures [and]curtailed all social activity, closed parks and recreation facilities, shuttered mosques and other religious places of worship, and closed shops and restaurants.”

From Sunday, it will also be mandatory for everyone in Qatar to wear face coverings when out in public – enforced by a possible fine up to $53,000.

More than 11,000 hospital beds were set aside for COVID-19 patients and over 30 hotels blocked off by the government to use as quarantine facilities.

“Qatar’s priority is the health, safety, and wellbeing of our population,” the official told CBS News, adding that, “anyone who tests positive for coronavirus immediately receives high-quality medical treatment at no cost.”

The robust health care system, and the fact that such a high proportion of the people in Qatar are young, relatively healthy laborers to begin with, has likely helped keep the confirmed COVID-19 death toll down to only 14 – considerably lower than other countries with similar case numbers.

The government is also trying to keep Qatar’s economy healthy. It’s providing “financial support to businesses through an $824 million fund, so that salaries continue to be paid on time.”

The International Monetary Fund has forecasted that Qatar will be one of the few countries in the world to escape a recession in 2020.

Though the GCO official insisted that Qatar, “is well-equipped to weather the economic impact of COVID-19,” some major sectors will inevitably take a hit.

Qatar Airways announced this week that it will cut nearly 9,000 jobs as the coronavirus crisis keeps demand for air travel low. The airline’s CEO told the BBC in an interview: “It’s a very hard decision… but we have no alternative.”

Work on Qatar’s infrastructure projects, meanwhile, continues – but at a much slower pace with many projects frozen. That means many of the foreign laborers are left to bide their time – on the “fertile ground” of the camps. 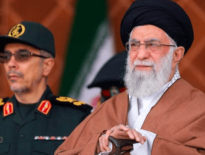 Headlines The Twilight of the Iranian Revolution 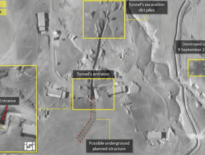 Features Iran building new weapons storage at military base…
0
wpDiscuz
0
0
Would love your thoughts, please comment.x
()
x
| Reply
We use cookies to ensure that we give you the best experience on our website. If you continue to use this site we will assume that you are happy with it.Ok