After nearly 40 years, a veteran photojournalist, Coşkun Aral, who had followed Civil War in Lebanon for years, uncovers the extraordinary background story of a photo from Beirut in 1985, which was on the cover of An-Nahar weekly supplement. 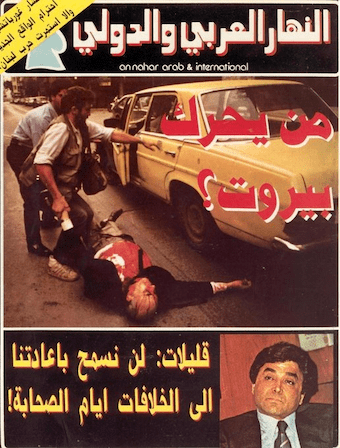 In 1985, at a time when Hezbollah took French, British and American nationals as hostages in Lebanon, which caused an international crisis, Anglican priest Terry Waite comes to Beirut to mediate and rescue the kidnapped foreigners. Journalists from all over the world gather for Waite’s press conference at the Commodore Hotel. While waiting, clashes break out in front of the hotel’s door facing Hamra street. A civilian is shot in a car, and Coşkun Aral is faced with the usual dilemma for every photojournalist: Rescue or photograph?

Here is the answer:

At the end of video, a Turkish cameraman in the press team plays his accordion for a song of Zeki Müren, a legendary Turkish singer who once ruled all the hearts, “Mihrabım Diyerek”. The lyrics of the song articulates the feelings of those who long for a Beirut in peace:

Saying you’re my mihrab (Mihrabım diyerek), I turned my face to you

At the branches of your soul, I built a nest.

And kept begging, for all these years

But couldnt teach you to call me “my love”