Paper prepared for the Economic Roundtable on

“The Impact of Syrian Refugees on the Lebanese Economy,”

Organized by the Maronite League,

Lebanese and Other Nationalities in Lebanon:

Practically all population and employment surveys in Lebanon share the characteristic of rarely specifying the Lebanese and non-Lebanese components in their results. This is remarkable since the non-Lebanese have usually constituted a significant component of either the resident population or the employed. That distinction has become critical in recent years with the continuing arrival of a large number of Syrian refugees in Lebanon, to such an extent of making it by far the country with relatively the highest number of refugees in the world.

This brief study is an attempt at remedying this serious deficiency. The focus of the study is to arrive at population and employment estimates, mainly by nationality, in mid-2011 and mid-2016; it does not intend to provide an elaborate analysis of the economic and political implications of such a situation. The hope is that official surveys in the future will adopt a similar structure to the one in the Table below, and correct its estimates where necessary.

The two chosen periods are mid-2011, which is the period just before the influx of Syrian refugees into Lebanon, and mid-2016.

We adopt a conservative approach to our estimation procedures. In other words, we usually choose the lower end of estimates for the non-Lebanese population and employment. This will be apparent in the Appendix on the calculation procedures of the estimates. The implication of such an approach is that the number of non-Lebanese, as population or workers, is likely to be higher than our estimates indicate.

2. Population and employment by nationality in Lebanon

Table 1 below summarizes the results of our estimates for the number of people and workers in Lebanon by nationality, in mid-2011 and mid-2016. 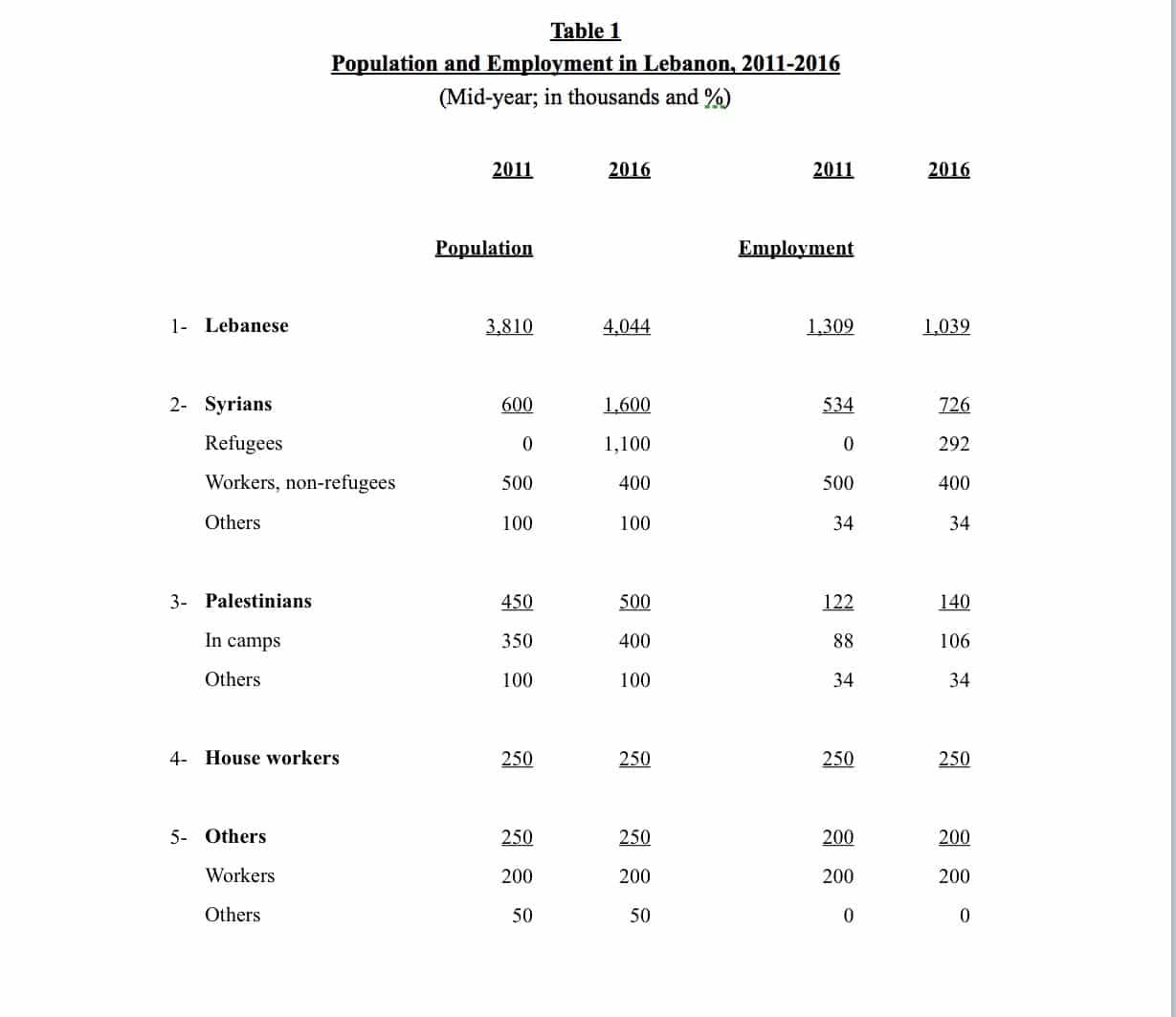 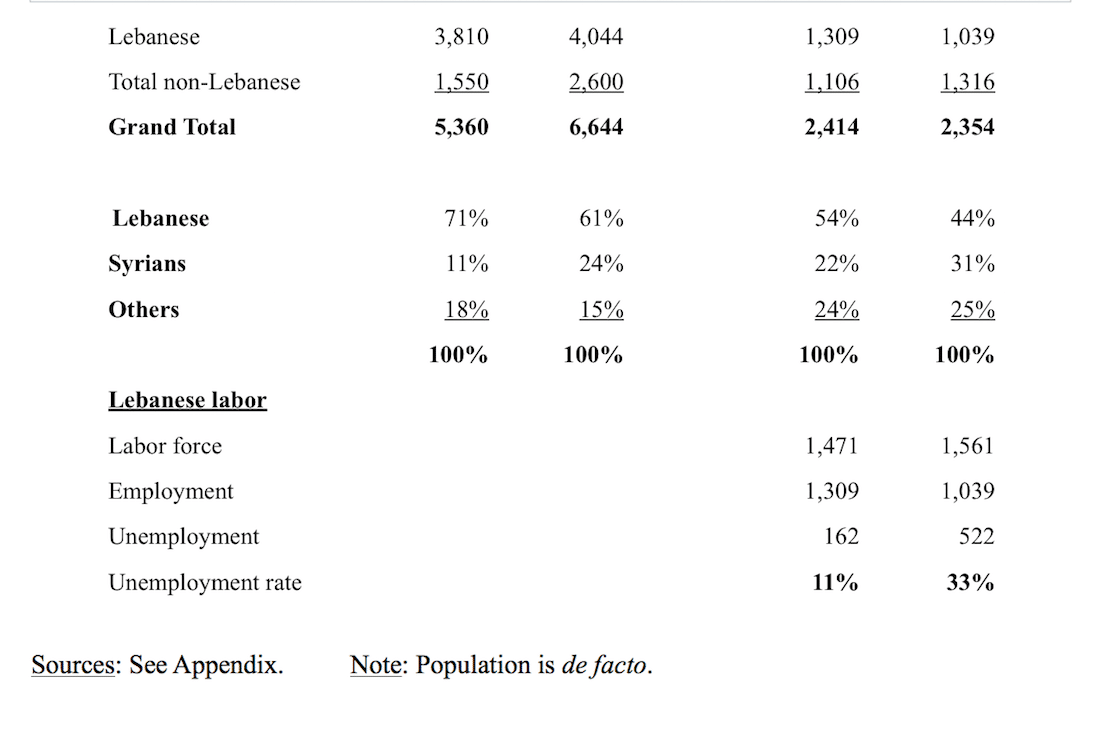 3. An assessment of the estimates

The following are brief comments on the estimates in the Table above.

a. The total de facto population in Lebanon has increased by about a quarter in the last five years to 6.7 million in mid-2016, while the share of the Lebanese population has fallen from 71% to 61%, and probably lower. A disturbing element in this situation is the fact that the inflow of refugees, who now represent about a quarter of the total population, is taking place in a Lebanon with a weak enforcement of laws, which makes the current situation insecure and potentially explosive.

b. Based on the World Bank detailed study (see References no. 10), it is estimated that some additional 200,000 or more Lebanese will have been pushed into poverty owing to the influx of the refugees1 . More important is the adverse impact on the physical infrastructure (electricity, water, sanitation, roads, etc.) and human infrastructure (education and schools, health and hospitals, security, etc.). The costs of infrastructure depreciation are immense, and their depreciation is not being replaced by government investment.

c. Thousands of Lebanese workers continue to be substituted for Syrian workers in practically all economic activities. This has contributed to a substantial increase in the Lebanese unemployment rate, which is estimated to have jumped from 11% in 2011 to 33% in 2016, representing additional 360,000 unemployed during the period.

d. While Syrian workers used to be concentrated in the past in agriculture and construction, they have become increasingly visible in industry and all service enterprises: restaurants, hotels, wholesale and retail commerce, hospital and medical establishments, engineering and even legal offices, etc. There are also thousands of illegal small Syrian-owned establishments in retail commerce and services.

e. Not all Syrian refugees are real refugees. Many enter Lebanon not seeking asylum but drawn by economic benefits. Indeed, poor Syrians may be attracted by the benefits that are distributed by international organizations to refugees. More important and independently of personal security considerations, a Syrian worker or unemployed may be attracted by the higher wages or income that he or she can earn in Lebanon. Thus, a significant number of “refugees” in Lebanon are not real refugees who are escaping the war in their country.

f. The Syrian worker is unjustly exploited. Owners of enterprises pay Syrian workers much less than corresponding Lebanese workers, usually less than half the salary. In addition, the Syrian worker, who often possesses no other means for living, enjoys no social security benefits and may be fired at will without notice or indemnity.

g. The Lebanese government is silent in words and action regarding this detrimental situation to both the Lebanese and the Syrian workers. It is our opinion that this reflects a tacit agreement of “laissez-faire” and “laissez-aller” between the authorities and owners of enterprises. This illegal and indefensible policy is implemented to compensate Lebanese enterprises for their substantial loss of business since 2011, owing to developments in the region and the weak growth of the Lebanese economy.

The Syrian refugee problem in Lebanon has had an extensive and adverse impact on all aspects of the economy and society. Worse, it may continue for years without adequate policy and management systems, which could undermine the existence of Lebanon as a political entity. The problem comes at a time when the Lebanese collective conscience still is alive with the bitter memories of the devastating consequences of the other, though then smaller, refugee problem of the Palestinians.

We propose the following recommendations:

Estimation Procedures for Population and Employment

The estimates in Table 1 are derived from official sources: publications by the Lebanese government and by multilateral organizations such as the European Commission, the United Nations and the World Bank. Other official sources include private interviews by the author with senior Lebanese security officials who are familiar with the numbers of non-Lebanese in Lebanon. A conservative estimation approach is adopted throughout, as indicated below.

Estimating the de facto Lebanese population is a difficult exercise, especially because the most recent official survey dates back to 2007 (see References no. 1). Moreover, estimates by multilateral organizations such do not specify whom they include in their estimates. We start with the official estimate of 3.6 million Lebanese for mid-2007, and then apply an average rate of growth of 1.2% per annum until mid-2016. That rate is derived from the IMF database (ref. 4), which corresponds to the average of the UN rate of about 1.6% and the World Bank rate of about 0.7% (refs. 8 and 11) for the period 2005- 2010. Later estimates by these organizations are disregarded since only recently they appear to include refugees, but without any explanation provided as to the composition of the population estimates.

The Lebanese employment estimates start with the World Bank survey on labor (ref. 11), where employment in 2009 is estimated at 1,232 thousand and unemployment at 11%2. Note that the period 2007-10 witnessed a strong economic growth with an average annual rate of more than 9%, quickly decelerating to about 1% in 2011. Accordingly, we apply an annual growth rate in employment of 5% in 2010, which is the average for the period 2007-10 in the World Bank survey, but conservatively assume that in 2011 the labor force grows at the same rate of 1.2% of the Lebanese population while unemployment remains unchanged at 11%.

For mid-2016, the labor force is also assumed to increase by the same rate as the population, i.e. 1.2%, which is significantly less than the 1.7% assumed by the World Bank study (ref. 11). Of course, this would make unemployment less than if the labor force were assumed to increase at the higher rate of 1.7%. As for unemployment, the other World Bank study in 2013 (ref. 10) has estimated Lebanese unemployment to increase by end 2014 in the range of 220,000-320,000. Despite the increasing substitution of Syrian for Lebanese labor during 2015-16, and the increasing establishment of small businesses by Syrian refugees, we assume Lebanese unemployment to increase only by the average of the range, i.e. by 270,000 individuals. This is in line with our conservative approach to the estimation procedures.

We divide the Syrian population in Lebanon into 3 categories: refugees, workers who used to work in Lebanon before 2011, mostly in agriculture and construction, and others.

According to the EC and the UNHCR, the number of Syrian refugees is approximately 1.1 million in 2016 (refs. 2 and 9)3. The UNHCR also notes that 53% of these refugees are 15 years old or more, who thus constitute a potential labor force (compared to 46% for Lebanon–ref. 11)). Conservatively, we assume that only half this number is employed, that is 292,000 representing a little more than a quarter of the refugee population. Their occupations are salaried workers and self-employed individuals in various activities.

In a previous study by the author, the number of Syrian workers who are not refugees was estimated at 670,000 in 2010, and an average of around 600,000 during 2008-2010 (ref. 3). However, in line with the sharp deceleration of economic activity that started already in late 2010, we assume that the number of non-refugee Syrian workers has significantly decreased to 500,000 in 2011 and still to 400,000 in 2016. As for the remaining “Others”, they are those who have been long-time residents in Lebanon and who are mostly heads of enterprise or self-employed. We estimate their unchanging number during 2011-16 to be 100,000 with the same ratio of employment to their population as for the Lebanese in 2011, i.e. 34%.

It is important to note that our estimate of the total number of Syrians in Lebanon accords very well with the figures provided by Lebanese security officials, who estimate the total Syrian population in Lebanon at about the same number of 1.6 million in 2016 (ref. 6).

The house workers in Lebanon mostly come from Asian countries (Philippines, Sri Lanka, Bangladesh, etc.) and Africa (Ethiopia, Ghana, Madagascar, etc.). So these nationalities constitute a category that is separate from the other ones in the Table, where population and employment are classified by nationality. It is therefore legitimate to classify them by function since this corresponds almost exactly to nationalities that are mutually exclusive with the others.

The number of house workers is assumed to remain unchanged at 250,000 during 2011-16, and is based on information provided by Lebanese senior security officials (ref. 6). The actual number of house workers may actually be higher, probably exceeding 300,000. We assume that the employment figure is the same as that for the population.

That population is estimated at 250,000 in 2011 and 2016, which is again based on limited information provided by Lebanese senior security officials (ref. 6). Since most of this population resides in Lebanon for work purposes, we a priori assume that about 80% of them are employed.

Finally, it is our opinion that the largest error in the estimates in Table 1 above may be the one associated with the Lebanese population rather than with the other nationalities.