One hundred years after the Paris Peace Conference of 1919, which set the terms for the end of World War I, the conflicting views that were at the heart of the Syrian and Lebanese visions for national liberation continue to cause controversies and misunderstandings.

Against a Hashemite project of pan-Arab unification led by Prince Faisal and a rival project driven by the Syrian National Committee (SNC) – which was based, as we have covered in earlier columns, on a misperception of the historical continuity between the Roman province of Syria and post-Ottoman Syria – two Lebanese delegations successively pleaded the case for the creation of the State of Great Lebanon under a French mandate.

In his speech before the victorious Allied Powers, Patriarch Elias Hoyek, who led the second Lebanese delegation to the Paris conference, positioned the emerging Lebanon as the continuance of an entity dating back from pre-Christian and pre-Roman Phoenician times, echoing ideas promoted by la Revue Phénicienne, founded the same year in Beirut by Charles Corm. However, without questioning the ideological merits of such a political claim, this millenarian distinction between a “Phoenician” Lebanon and an “Arab” Syria anachronistically conflates the rewritten history of the coastal city-states of the Eastern Mediterranean with the geography of the Roman world. 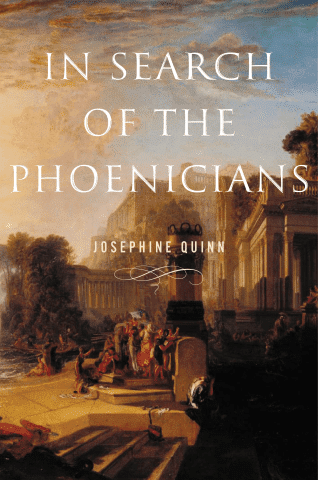 Phoenicia, as a defined political-administrative entity, was created by the Romans and did not exist before the annexation of the Levant by Rome in 64 BC. As demonstrated by Josephine Quinn in her book In Search of the Phoenicians (2017), the term Phoenicia emerged in the writings of the great authors of the classical Greek era. 800 years before the Christian era, Homer used the term “Phoinix” to refer to both sailors from the eastern Mediterranean and the purple dyes of Tyre. These “Phoenicians” were an integral part of Greek mythology, and it was they who brought the alphabet to mainland Greece. They are also found in the writings of Herodotus and then in playwright’s tragedies, such as The Phoenician Women of Euripides (410 BC). Nevertheless, this reference remains exclusively Hellenic: “Phoenicia did not exist elsewhere, not even in Phoenicia itself.

Those we call Phoenicians were probably not aware of having a collective identity that constituted a form of union. They lived in city-states that were separate from each other and never formed a political union within a state, as Egypt did, for example. Their affiliations as well as their allegiance went to their city-states. They recognized themselves as Tyrians, Sidonians, Giblites, Aradians, etc. Biblical sources sometimes identify them in terms of one city-state or the other, other times by the generic term “Canaanites”. Even later, under the Assyrian, Babylonian, and Persian empires, these city-states continued to have relative autonomy, ruled by local dynasties, and the generic term “Phoenicia” was not found anywhere other than in Greek texts.

Following the death of Alexander the Great (323 BC), the “Phoenician” coastline became an area of conflict between two rival Macedonian dynasties: The Seleucids, ruling from Antioch, and the Lagids, ruling from Alexandria in Egypt. During this period, later called Hellenistic, the city-states were Hellenized and almost completely integrated into the Greek world. Interestingly, it is during this period that we see a collective awareness of “Phoenicianism” emerging among the inhabitants of the coast of the Levant, marked by the adoption of the “koine” language (the form of Greek used as lingua franca) to replace their local dialects. The coastline was placed under the hegemony of the Roman Republic by Pompey (64 BC) and became part of the Roman province of Syria whose capital was in Antioch. Several cities on the Phoenician coast received tax exemptions, and their citizens were granted Roman citizenship.

Around the year 200, a thousand years after the appearance of the word “Phoenicia” in Greek texts, this name was used to refer to a political, official and concrete geographical division. Emperor Septimius Severus and his Senate decided to divide the province of Syria into two: Hollow Syria (“Coele-Syria”) in the North and Syrian Phoenicia in the South. Under Emperor Arcadius in the late fourth century, Syrian Phoenicia was divided into two new provinces: Maritime Phoenicia (Tyre), extending along the coast between the present-day towns of Tartous and Acre; and Lebanese Phoenicia (between Homs and Damascus), covering the Anti-Lebanon mountain chain and the territories to the east all the way to Palmyra. Furthermore, the Tabula Peutingeriana (also known as Peutinger Table), a medieval copy of a Roman map dating most probably from the fourth century, shows the name “Syria Phoenix” on the coast. However, the official existence of all these Phoenicias ends in the 630s with the Arab conquest.

It was in Europe during the seventeenth and eighteenth centuries that the restored passion for Hellenism led to the “rediscovery” of “Phoenicia”. This rediscovery was certainly linked to the biblical synonymy between “Canaanite” and “Syrophenician” in the Gospels. In 1860, Ernest Renan headed off on his Mission to Phoenicia under the reign of Napoleon III. He created a collective “Phoenician” archeology which extended between the island of Arwad to the north and Upper Galilee in the south.

Conscious of the “significant difference between Syrian and maritime Phoenicia on the one hand and primitive Phoenicia on the other”, Renan used the Greco-Roman administrative division to describe a civilization that had supposedly vanished “with the conquests of Alexander”, while considering Phoenician art as imitating that of the classical Greek world. Modern Phoenicia, or the imaginary pre-Alexander Phoenicia, is thus born from an erroneous projection of the city-states of the ancient Levant into a toponymy borrowed from the past political geography of the Roman world.

Hence, Phoenicia, as envisioned by the Phoenician nationalists, is therefore a creation of the nineteenth century, just like French Gaul or German Germania. If a united historical Phoenicia with defined borders ever existed, it was under the Roman Empire and in the Hellenic historical context, and no other (except in terms of ecclesiastical titles).