A man and woman are pictured in a file photo walking through the rubble of destroyed buildings in Deraa, Syria. (Credit: Alaa al Faqir/Reuters via CNS.)

In a rare move, Pope Francis’s representative in Syria met on Thursday with the ambassadors accredited to the Vatican, in an attempt to raise awareness on the impact of the eight-year-long civil war in the country.

According to a Vatican press statement and further information provided by Vatican News, Cardinal Mario Zenari focused above all on the humanitarian aspect of what is the most serious “humanitarian catastrophe caused by man after the end of the Second World War” and recalled “that five armed forces of countries in disagreement are still operating on Syrian soil and skies.”

Though the statement does not say if he mentioned these countries, the list of nations currently fighting in Syria include Iran, Russia, Turkey and the United States. 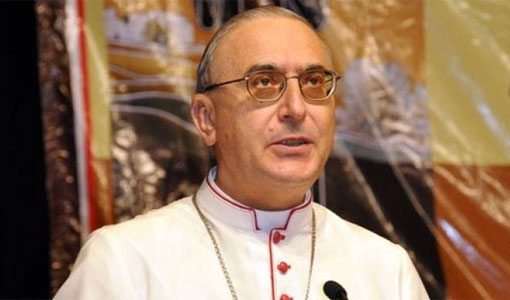 The prelate called for an international response to the crisis and “radical” long-term solutions, quoting from Pope Francis’s recent encyclical Fratelli Tutti: “We need to develop the awareness that today we are either all saved together or no one is saved.”

The meeting, the Vatican said, “was an opportunity to rekindle attention towards the situation in Syria, which has been prostrated by almost ten years of violence.”

Also present in the meeting were two of the Vatican’s top diplomats: Cardinal Pietro Parolin, the Secretary of State, and Archbishop Paul Richard Gallagher, who is the Vatican’s Secretary for Relations with States.

Parolin introduced Zenari, saying he hoped that the world would not grow used to the “litany of horrors that every day comes to us from that tormented nation.”

Zenari gave a speech on the theme of “Let us not let hope die!” and lamented the fact that Syria seems to have “disappeared from the media radar,” according to the Vatican statement.

Despite the fact that the world is no longer talking about this conflict, the nuncio said, the humanitarian crisis continues, not only with rockets but now the “bomb of poverty,” which has affected an estimated 80 percent of the population. This, he argued, is the greatest cause for concern.

Zenari told the ambassadors – several of whom shared scenes and notes from the meeting on social media – that “time is running out” in this war-torn nation that is also heavily impacted by the COVID-19 crisis.

RELATED: There were 5 Franciscan priests in Aleppo, Syria: 2 died of COVID-19

Syria is an “expanse of ghost villages” strewn with rubble and “many Syrians have lost hope,” the cardinal said.

Caroline Wijers, ambassador of the Netherlands to the Holy See, said that Zenari had begged that “Syria no longer be buried under a blanket of silence.”

Zenari also expressed his gratitude for the generosity of many states and institutions, particularly agencies of the United Nations, in helping the estimated 11 million Syrians who are in need of humanitarian assistance today.

According to the Vatican statement, the prelate “spoke of the delicate question of the sanctions imposed on Syria,” and how these affect the population. Vatican News expanded on these comments, reporting that the cardinal argued the sanctions hurt the people but do not weaken the government in Damascus.

Chiara Porro, the recently-arrived Australian ambassador to the Holy See also attended the briefing, noted that Zenari “spoke of the humanitarian catastrophe –  the starvation, the spread of disease and the destruction left after so many years of war.”

Papal diplomacy in Syria has helped Russia and Assad

New cardinal refused to abandon Syria when things got tough