Trending
You are at:Home»Categories»Headlines»No-shows at the Wedding
By Salman Masalha on 20 October 2018 Headlines

Lucy Aharish’s marriage to Tzachi Halevy, which drew the seed purists from their hideouts, exposed the simple truth about matters of relationships between men and women – that Israel is no different than the surrounding Arab region

A new social storm burst out in the country following the wedding of a Muslim Arab woman and a Jewish man. The Hebrew-language media is full of commentary about it, from condemnations steeped in racist epithets reminiscent of dark periods in history, to hearty congratulatory wishes to the new couple that has exited the closet of anonymity to enter the world of matrimony with bells and whistles.

Firstly, we must say in this context that when it comes to personal matters, there’s no difference at all between Israel, the Arab countries and the rest of the Muslim world. A few months ago Tunisian President Bejin Caid Essebsi threw a reverberating social bomb in the Arab world by proposing to revoke constitutional laws that discriminate against women, and replace them with laws that confer full equality between men and women. Among his proposals was an amendment to permit a Muslim woman to wed a non-Muslim man. As we know, all Arab and Muslim countries forbid marriages between Muslim women and men of other faiths.

There was an outcry from Islamists throughout the Arab world, from the Al Azhar Institute, a central religious establishment for Sunni Islam and all the bearded men who claim to be preserving purity of the seed. They all came out as one (one man) against the Tunisian president’s initiative, basing their arguments on Islamic religious law.

I ought to point out that Islamic law does permit Muslim men to wed Jewish or Christian women, despite their being “heretics” from the standpoint of Islamic faith, but it bars Muslim women from marrying non-Muslim men. The reasons for this, according to religious explanations, may be divided into two categories: Pure male chauvinism, for the Muslim religion views the man’s status in the family as greater than that of the woman; and theological chauvinism based on a concept that views Islam as the superior religion over all other faiths.

Appeals are often made to the Islamic wise men on the subject by Muslims living in Western countries. The clergy reiterate time and time again to men and women who make these appeals that it is completely forbidden for a Muslim woman to marry a non-Muslim man.

Lucy Aharish’s marriage to Tzachi Halevy, which drew the seed purists from their hideouts, exposed the simple truth about matters of relationships between men and women – that Israel is no different than the surrounding Arab region.
It must be said that everyone, including Jews and Arabs, are sailing on the same racist ships that come from the same factory of monotheistic faith. But it seems that the Jews and the Arabs sail through parallel seas. For while the Hebrew-language media is full of reports about the matter from every imaginable angle, local Arab media have barely mentioned this widely reported wedding.

Hebrew-language media, in all their variety, including this newspaper, are making a mistake in their failure to relate to the utter silence on the issue on the part of Arab lawmakers.
Arab lawmakers, who generally lunge at cameras and microphones, have frozen in their tracks. None of them says a word. They who know to take advantage of every opportunity and every single tweet to expose the anti-Arab racism of the Jews, and attack it from the left and from the right. For some reason, on this issue it’s as though the earth has swallowed them alive.

I tend to believe that their failure to relate to the wedding is due to one simple reason: their fear of exposing their true faces. For on this issue, they are no different than Dery, Lapid or Bennett. If that’s not the case, then the burden of proof lies with them.

No-shows at the Wedding

Headlines Iran’s Anti-Western ‘Blueprint’ for the Next… 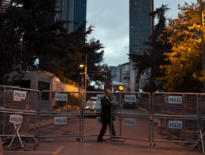 Headlines For Khashoggi, a Tangled Mix of Royal Service and …
0
wpDiscuz
We use cookies to ensure that we give you the best experience on our website. If you continue to use this site we will assume that you are happy with it.Ok