Trending
You are at:Home»Categories»Headlines»Israel’s Army Goes to War With Its Politicians
By Ronen Bergman on 23 May 2016 Headlines

TEL AVIV — IN most countries, the political class supervises the defense establishment and restrains its leaders from violating human rights or pursuing dangerous, aggressive policies. In Israel, the opposite is happening. Here, politicians blatantly trample the state’s values and laws and seek belligerent solutions, while the chiefs of the Israel Defense Forces and the heads of the intelligence agencies try to calm and restrain them.

Prime Minister Benjamin Netanyahu’s offer last week of the post of defense minister to Avigdor Lieberman, a pugnacious ultranationalist politician, is the latest act in the war between Mr. Netanyahu and the military and intelligence leaders, a conflict that has no end in sight but could further erode the rule of law and human rights, or lead to a dangerous, superfluous military campaign.

The prime minister sees the defense establishment as a competitor to his authority and an opponent of his goals. Putting Mr. Lieberman, an impulsive and reckless extremist, in charge of the military is a clear signal that the generals’ and the intelligence chiefs’ opposition will no longer be tolerated. Mr. Lieberman is known for ruthlessly quashing people who hold opposing views.

This latest round of this conflict began on March 24: Elor Azariah, a sergeant in the I.D.F., shot and killed a Palestinian assailant who was lying wounded on the ground after stabbing one of Sergeant Azariah’s comrades. The I.D.F. top brass condemned the killing. A spokesman for Lt. Gen. Gadi Eisenkot, the chief of staff, said, “This isn’t the I.D.F., these are not the I.D.F.’s values.”

But right-wing politicians backed Sergeant Azariah. “I.D.F. soldiers, our children, stand before murderous attacks by terrorists who come to kill them,” the prime minister said. “They have to make decisions in real time.” Mr. Lieberman, then still the leader of a small far-right opposition party, turned up in military court to support the soldier. Mr. Netanyahu also called the soldier’s father to offer support.

An I.D.F. general told me that the top brass saw the telephone call as a gross defiance of the military’s authority. The deputy chief of staff, Maj. Gen. Yair Golan, chose one of the most sensitive dates on the Israeli calendar, Holocaust Memorial Eve, to react: He suggested that Israel today in some ways resembles Germany in the 1930s.

Mr. Netanyahu countered that General Golan’s words do Israel an injustice and “cheapen the Holocaust.” His defense minister, Moshe Yaalon, a former chief of staff and a member of Mr. Netanyahu’s party, backed the army. He told a gathering of top officers to speak freely, even if it went against political leaders.

The prime minister summoned Mr. Yaalon to an “urgent clarification discussion.” Shortly after, he invited Mr. Lieberman to join the government coalition with his small parliamentary faction and offered him the defense portfolio.

In Israel’s short history, army commanders and the heads of the intelligence agencies have often advocated the use of force and in many cases showed contempt for the law and human rights. Political leaders have typically been more measured.

In 1954, military intelligence initiated, out of sight of Prime Minister Moshe Sharett, a series of terrorist attacks in Egypt with the aim of causing a rift between that country and the United States and Britain. In 1967, the military urged Prime Minister Levi Eshkol to allow an offensive strike on Egypt and Syria. When he asked them to wait, they plotted to detain him in a basement until he gave in.

What caused the army and the intelligence agencies to become, relatively speaking, doves while the politicians have become the hawks? In the last three decades, the army and the intelligence agencies have become more cautious about breaking the law. The threat of prosecutions in the International Criminal Court has helped. Also, the defense agencies are motivated only by national interest, rather than ideology, religion or electoral considerations. Top army and intelligence officers are also intimately familiar with the nature of Israel’s occupation of Palestinian territories — and its price.

But above all, the clash between the political and defense establishments can be summed up in two words: Benjamin Netanyahu. Many of the military and intelligence officers who have served under him simply detest him. “I told Netanyahu that a chasm of non-confidence had opened up between him and them,” Uzi Arad, a former national security adviser, told me. “He is the worst manager that I know,” said Meir Dagan, the former director of the Mossad. “I quit the job because I was simply sick of him.”

In 2010, Mr. Netanyahu got into a serious fight over Iran with Mr. Dagan and his two colleagues, Yuval Diskin, the former director of the Shin Bet, Israel’s internal security service, and Lt. Gen. Gabi Ashkenazi, the former I.D.F. chief of staff. The military and intelligence leaders believed that the prime minister’s plan to attack Iran’s nuclear installations was politically motivated by electoral considerations and would embroil Israel in a superfluous war. Moreover, they thought he was going about it illegally, bypassing the cabinet.

Mr. Netanyahu has clashed with the security establishment over a number of issues, from proposals to improve conditions for Palestinians in the West Bank (the prime minister opposed them) to accusations that Palestinian Authority President Mahmoud Abbas incites terrorism (the Shin Bet says he helps fight it) to Mr. Netanyahu’s proposal that the families of terrorists be deported (the Shin Bet discourages it, and the attorney general has said it would be illegal). Both the Shin Bet and the Mossad opposed the campaign against Hamas in Gaza in 2014, and the prime minister’s management of it.

In some conversations I’ve had recently with high-ranking officers about Mr. Lieberman’s appointment as defense minister, the possibility of a military coup has been raised — but only with a smile. It remains unlikely. The biggest challenge to the relationship between the right-wing politicians and the top brass will come if Mr. Lieberman tries to get the army to do the kinds of things he has enthusiastically proposed in the past.

What would the army and intelligence chiefs do if the new minister issued instructions not to prosecute people who committed crimes like Elor Azariah’s in Hebron? Or if Mr. Lieberman demands, as he has done in the past, that Israel assassinate Hamas leaders if they do not return the remains of fallen Israeli soldiers, or “conquer Gaza” or “bomb the Aswan Dam,” as he has said Israel would do if it ever faced war with Egypt? Will they execute his orders, or refuse because they can grasp the dimensions of the catastrophe that such actions would bring about, and suffer the personal consequences?

Israel’s Army Goes to War With Its Politicians 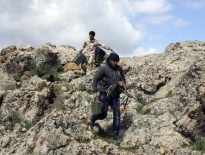 Headlines The Southern Front in Syria: Washington Should Su…

International Sports Fifa reformer says Gianni Infantino is using autho…
0
wpDiscuz
0
0
Would love your thoughts, please comment.x
()
x
| Reply
We use cookies to ensure that we give you the best experience on our website. If you continue to use this site we will assume that you are happy with it.Ok