The Islamic State has long relied on several key factors in making its case for Muslim hearts and minds. For several years, its astonishing military success, achieved, as they often said, “with the permission of Allah,” was the best of all statements. An organization given up for dead in 2010 had not only survived but expanded and flourished. The fact that this success was coupled with the restoration of a Caliphate along the lines of the “Prophetic Methodology” just strengthened the case that this Salafi Sunni Muslim revivalist state was a going concern, something very special.

While ISIS has been attacked on many real and virtual fronts, one charge that Muslim critics have often made is that ISIS is not Islamic at all. Practicing takfiragainst the Takfiris, these critics have dubbed them Khawarij or Kharijites (“the Outsiders”) after that very early Islamic grouping of the 7th century.[1] These first Kharijites actually came from among the partisans of Ali, and warred against both him and his rival for the Caliphate, Muawiyya Ibn Abi Sufyan. The first Kharijites were puritanical and ruthless non-conformists who rebelled against the Islamic status quo, finding it insufficiently pure. In that sense, there certainly are some similarities with the Islamic State. Today’s critics seek to isolate ISIS as “outside” of Islam, even outside of Salafi Islam.[2]

While not responding directly to the claim that they are Kharijites, there is no doubt that the Islamic State does exert great efforts to present the image of orthodoxy – orthodoxy of a Salafi Islamist kind.[3] The image to be presented is not a new one; back in 2006, the leader of the new declared Islamic State of Iraq described their rule in this way:

“The people of Iraq are today one of the greatest nations on the face of the earth in maintaining monotheism, for there is no polytheistic Sufism being propagated, or shrines being visited, or innovated festivals being celebrated, or candles being lit or a pilgrimage being made to a pagan totem, for the people of Iraq have destroyed these shrines with their own hands so that Allah will be worshiped alone… Go and delve into the country, so that you will see that [there are no longer]places that encourage sordidness or corruption, and no [unveiled women]present to infatuate the young, and to tempt the old, or to be devoured by wolves… Search and you will not find a dance party that angers Allah in His heavens…”[4]

As military victory has become scarcer in later 2015 and beyond, the Islamic State has emphasized a series of spectacular acts of terrorism worldwide, and these have certainly captured attention. The fact that many of these victims have been Muslims has strengthened the “Kharijite” argument, as have high-profile forms of slaughter such as the burning alive of a Jordanian pilot in January 2015.[5] But ISIS has not abandoned making the case, through its still-potent propaganda apparatus, that it is faithfully fulfilling the duties and responsibilities of a rightly guided Islamic state.

The imposition of shari’a is one way that ISIS seeks to demonstrate its impeccable (Salafi) Islamic credentials. Admittedly, ISIS’s ideology is actually much more complex than just Salafism.[6] But I am referring here to the projection and imagery of a worldview, rather than the ideology itself. While some in the West focus on some of the Hadd punishments, such as cutting off the hands of thieves or stoning adulterers, the ISIS message is really one of good governance, actually the best possible governance, one that is faithful to the commands of the Almighty.

This is nothing new. One of the most heart-breaking videos MEMRI has ever documented is one showing the discussion before ISIS’s stoning to death of a woman taken in adultery near Hama, Syria in October 2014.[7] The killers of the woman urged a recalcitrant father to forgive his daughter before they carry out the punishment. Even though they are about to kill her, they come across as seemingly more merciful than her parent. The speaker cautions that “this is a message to all married men from a married Muslim woman, who was driven to do what she did by the mistake of some men. Don’t leave your women alone beyond the period designated by the shari’a.”[8]

A typical recent ISIS video released on August 10, 2016 by Al-Jazeera Province (Wilaya), titled “The Authority of Sharia,” graphically presents this vision. The ancient Arabs are shown as idol worshippers – using clips from television serials – until the arrival of Muhammad who ends the first period of ignorance (Al-Jahiliyah). The Islamic State then appears and ends the latter day Jahiliyah by implementing and enforcing the rule of Allah on earth, something far better than the “rotten democracy” and secularism of other regimes.

The video graphically shows this “better way” – the poor are provided for and given charity, morals are enforced, the expiration dates on foods and medicine are checked, weights and measures are tested to be sure that people are not cheated in the market places. Corporal punishment for minor offenses is shown being meted out with the repentant culprits embracing and thanking their punishers afterwards. 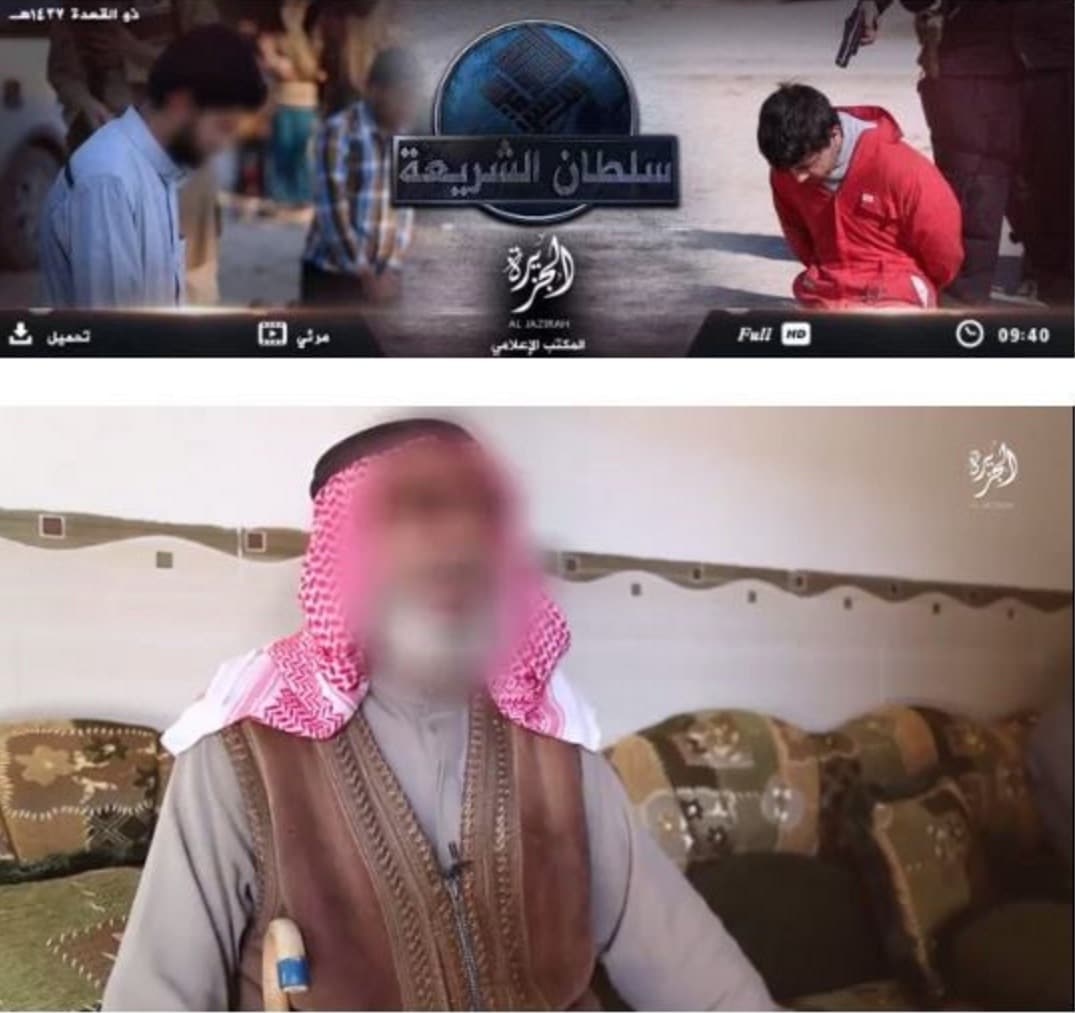 Three actual deaths are shown in the video; two former Iraqi Army soldiers who took up arms against the Islamic State, shackled and dressed in orange, are shot in the head by the side of the road, and, in another scene from Tel Afar, a shari’a court judge pronounces the death sentence on a homosexual pedophile who is then thrown from a tall building and stoned to death. The punishments and killings are public events – morality plays – with ample explanations of the religious reasons for the sentence read out in detail to audiences of male onlookers including many little boys and a few old men. The administration of “justice and mercy” depicted in this video, harsh to Western eyes, would seem mostly unobjectionable to some Muslim audiences far larger than those who support the Islamic State.

Another way that the Islamic State seeks to burnish its religious credentials as a faithful organization carrying out God’s commands is by the zealous promotion of monotheism (tawheed) and repentance (tawbah) among its subject population. Of course, tawheed, the strict and uncompromising oneness of the God of Islam, is a core belief of Muslims beyond the Islamic State. But by this point in the history of the Islamic State, the usual mushrik suspects – Shia, Christians, Yazidis – are rather thin on the ground. So in addition to the occasional Muslim executed for practicing “sorcery,” rooting out remnants of folk Islam or Sufism is a good way to vividly illustrate this principle.

An August 13, 2016 video from ISIS’s Al-Furat province titled “I Am Leaving You Upon a Clear Path” detailed a campaign to promote a better understanding of religion among the region’s population. The title is taken from a saying of Muhammad.[9] The 13-minute video also begins by making a clear connection with the period of formative Islam before moving on to acknowledge the long years of bloody struggle against the infidels and efforts to spread Islam worldwide. One early image shows an ISIS fighter with a black flag approaching Saint Peter’s Basilica in Rome.

It then introduces cleric “Abu Muhammad Al-Homsi” who details the success that the tawheed campaign has had. Abu Muhammad notes that they were surprised by the great attendance and acceptance of the campaign with more than 35,000 participants. The campaign involved all the mosques but also taking the message to men working in the fields and distributing material by hand and on truck sideboards. Boys get a piece of candy along with a religious pamphlet. 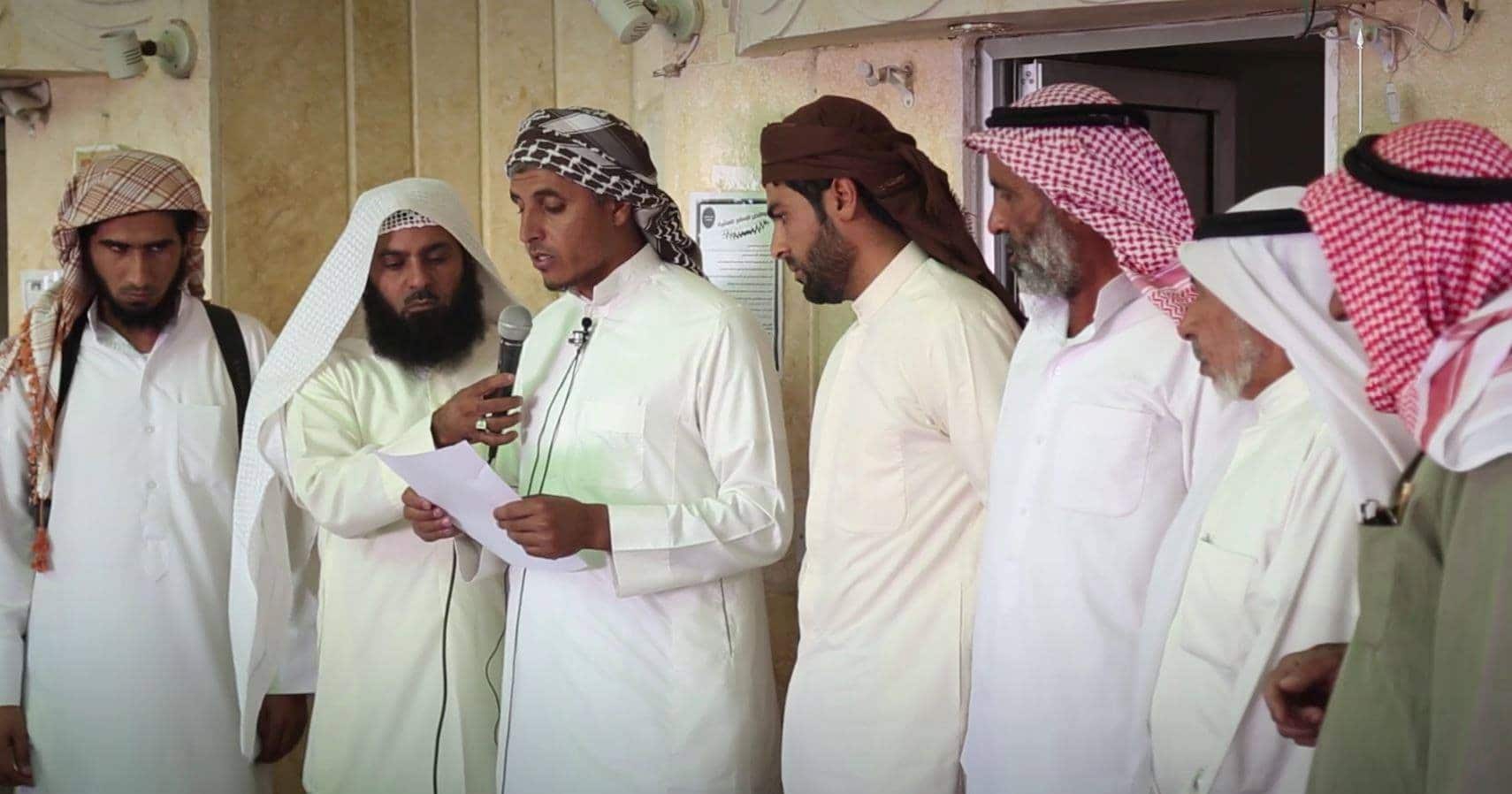 An interesting part of the campaign is the opening of “repentance centers” where ahl al-bid’a (those Muslims who have practiced forbidden “innovations” like Sufism) repent of their errant beliefs. The video shows groups of men from the Al-Khaznawiyya Sufi sect “repenting from that evil” by reading a public statement acknowledging that they were “mushrikeen” who “worshipped the dead, religious leaders, and graves.” They now strongly rejected such beliefs and called on all other Muslims to do the same.

Of course, the antipathy of ISIS and of Salafists in general against Sufism is nothing new. Indeed, it is remarkable that almost 10 years since the first speech of Abu Omar Al-Baghdadi in December 2006 that there would be any Sufis left in ISIS-controlled territory. Attacks against Sufis in general still make occasional appearances in ISIS videos aimed outside of their territory, as in the January 2016 video series focusing on North Africa which decried Morocco as “the country of more than 100,000 polytheistic shrines… with more Sufi lodges and shrines than mosques.” 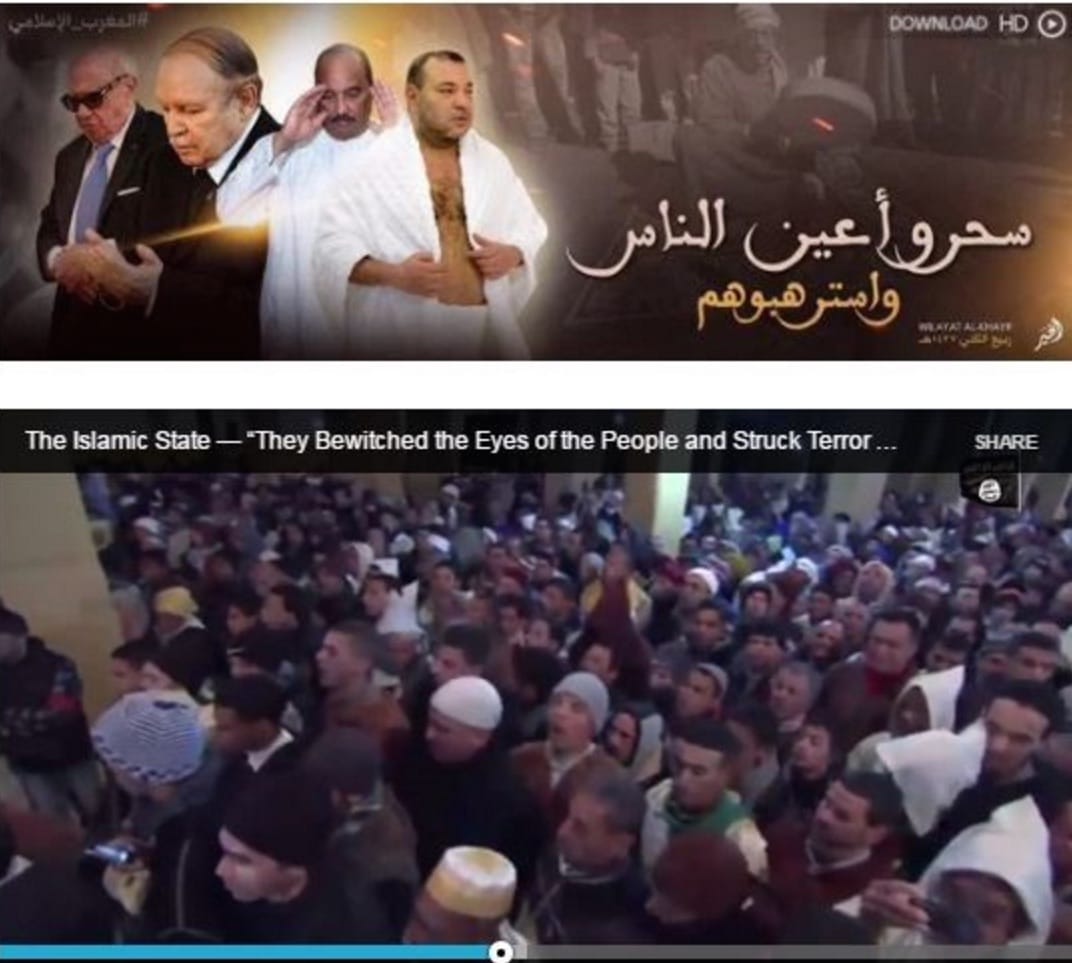 In addition to the imposition of Sharia and its zeal for promoting right belief among its own population, another way that ISIS seeks to promote an image of orthodox Salafi Islam is through the work of da’wah or the proselytizing of Islam among non-Muslims. In this particular field there is no better evidence than the latest issue of the Islamic State’s signature English-language online magazine Dabiq which appeared in August 2016. Issue 15 devotes a huge part of the publication – 20 pages – to a detailed theological refutation of Christianity and the Bible.[10]

Aside from devoting so much space to such an argument, the interesting thing is that the Islamic apologetics employed here are those practiced by Muslim preachers seeking to convert Christians for decades if not for centuries.[11] This is not about foreign policy but about right belief, about promotion conversion. And there is nothing particularly unique or ISIS-like in the appeal, strongly flavored by the work of Western modernist critics of Christianity and the Bible, except that it is the Islamic State associating itself with an age-old struggle for religious dominance and credibility going back to the revelation of the Qur’an and its view of other religions.[12] Again, ISIS associates itself with an approach that many conservative Muslims would find completely unobjectionable.

With its penchant for bloody histrionics in high-definition video, it is sometimes all too easy to forget that the Islamic State repeatedly seeks to portray itself, to its own population and to outside audiences, as a faithful steward of standard Salafi Islam within the admittedly rather unique circumstances of the ISIS “caliphate.” It does so by both the use of propaganda and by real events connected to its governance.

Certainly the brute force and power being brought to bear against the ISIS heartland in Syria and Iraq should eventually lead to positive results in successfully denting one part of the ISIS image. Nobody likes a loser, especially one claiming to have a divine mandate. But one can also foresee that all this effort, both real and perceived, at burnishing the “Islamic” credentials of the Islamic State will be used one day to make the case that the nascent state crushed by the anti-ISIS Coalition was actually far more orthodox, effective and sincere than its many critics would care to admit today. The Islamic State of today is preparing the arguments and the images now that the revisionists and apologists of tomorrow will use.

[10] MEMRI JTTM report Feature Article In Issue 15 of ‘Dabiq’: A Polemic Against Christianity And Judaism, August 1, 2016.