(WFI) The IOC has decided to take no action into the conduct of Sheikh Ahmad Al Fahad Al Sabah in the FIFA election after a presidential candidate filed a complaint alleging he broke ethics rules.

INSIDER is told that the IOC’s chief ethics and compliance officer, Paquerette Girard Zappelli, was informed of the complaint on the eve of the election won by Gianni Infantino. Prince Ali Bin Al Hussein of Jordan, defeated by Sepp Blatter in last year’s election, has had a bitter rivalry with Salman, head of the Asian Football Confederation. Last year, Prince Ali’s role as an Asian vice-president of FIFA was taken by Salman. Jerome Champagne was the other FIFA presidential candidate.

Sheikh Ahmad, the FIFA ExCo member and Olympic powerbroker from Kuwait, “completely rejects” accusations that he exploited his connections as head of the Association of National Olympic Committees to unfairly lobby some of world football’s 209 member associations to vote for Sheikh Salman. He suggested the allegations, which appeared in the Daily Mail newspaper on Wednesday, were designed to smear him.

In a statement to INSIDER, Ahmad said they were “wholly untrue”.

“Sheikh Ahmad has been a member of the football family through the AFC and FIFA for over 25 years and operated within the FIFA ethics guidelines during the last FIFA presidential election process,” the statement said. “At no time during the election process did Sheikh Ahmad contact any NOCs or Olympic bid cities to ask them to influence their voting FIFA members in the election.”

The IOC’s ethics commission is not taking action.

Sheikh Ahmad was hugely influential in helping Salman land the AFC presidency in 2013. But the Bahraini FIFA executive’s campaign to land the most powerful job in world football fell

apart in the final weeks, despite desperate last-ditch efforts by Ahmad to whip votes.

Sheikh Ahmad, who is also president of the Olympic Council of Asia and joined FIFA’s rule-making board last April, spent a huge part of the FIFA Congress out of the convention hall.

His seat at FIFA’s top table, clearly visible from the media tribune, was vacant for long periods at the crunch meeting held to approve reforms and elect a new president to replace the disgraced Blatter. Ahmad’s absence fuelled media speculation that he was involved in frantic lobbying to secure votes for Salman’s flagging presidential bid.

With Infantino garnering 88 votes to Salman’s 85 in the first round, his efforts were to no avail as the pathway cleared for the Swiss to swing Prince Ali’s backers behind him and shut out Salman in the second ballot.

“Sheikh Ahmad left his seat at times during the FIFA Congress to deal with matters related to the reforms presented to the congress,” the statement from the Kuwaiti said. “He also had to deal with the arrival of VIP guests.”

As a member of FIFA’s reform commission, Ahmad had to deal with last minute bureaucratic matters around the reform vote as well as protocol issues around the arrival and departure of IOC president Thomas Bach, World Anti-Doping Agency president Craig Reedie and Swiss IOC member Rene Fasel.

After Friday’s election, Ahmad praised Infantino on his victory and the other candidates “for running such strong campaigns, conducted in the true spirit of democracy”.

Ahmad said the wide-ranging reforms passed by the FIFA Congress “demonstrated the shared belief that change is needed”. “Under the new leadership of president Infantino, and with the support of the 209 national associations, I believe we have established a foundation from which we can drive forward and once again put the joy back into football,” he said in his Feb. 27 statement.

IOC TO TAKE NO ACTION AGAINST SHEIKH AHMAD

International Sports Winners and losers from the FIFA Presidential elec… 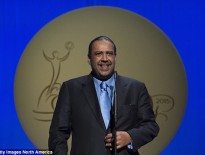 International Sports Olympic chief Sheik Ahmad Al-Sabah under fire over…
0
wpDiscuz
We use cookies to ensure that we give you the best experience on our website. If you continue to use this site we will assume that you are happy with it.Ok