Trending
You are at:Home»Categories»Features»If North Korea Didn’t Detonate a Hydrogen Bomb, Then What Was It?
By War is Boring on 6 January 2016 Features

North Korea claimed to have detonated a thermonuclear — or hydrogen — bomb near its nuclear test site at Punggye-ri on March 6. But there are reasons to doubt at least one part of Pyongyang’s boast.

We do know something caused a 5.1 magnitude seismic event near the site, and humans were responsible. It was most likely a nuclear weapon … a test. Pyongyang certainly claims so. But whether North Korea exploded a hydrogenbomb is uncertain.

“While we cannot confirm these claims at this time, we condemn any violation of U.N. Security Council Resolutions and again call on North Korea to abide by its international obligations and commitments,” a U.S. State Department spokesperson stated in a press release.

Tsar Bomba (Russian: Царь-бомба; “Emperor Bomb”) is the nickname for the AN602 hydrogen bomb, the most powerful nuclear weapon ever detonated. It’s October 30, 1961 test remains the most powerful artificial explosion in human history. It was also referred to as Kuz’kina Mat’ (Russian: Кузькина мать, Kuzka’s mother), potentially referring to Nikita Khrushchev’s promise to show the United States a “Kuz’kina Mat'” at the 1960 United Nations General Assembly. The famous Russian idiom, which has been problematic for translators, equates roughly with the English “We’ll show you!” Developed by the Soviet Union, the bomb was originally designed to have a yield of about 100 megatons of TNT (420 PJ), but the yield was reduced to 57 megatons to reduce nuclear fallout (and also to prevent the blast from destroying the drop aircraft). This attempt was successful, as it was one of the cleanest (relative to it’s yield) nuclear bombs ever detonated. Only one bomb of this type was ever built and it was tested on October 30, 1961, in the Novaya Zemlya archipelago, at Sukhoy Nos.

The reasons for the uncertainty have to do with the estimated yield, seismic waves generated by the test and the technical complexity of building a hydrogen bomb.

North Korea as a matter of course exaggerates its military and technological accomplishments, but has tested at least two previous atomic bombs, which work by provoking a compacted ball of nuclear material into undergoing an explosive chain reaction.

These are considerably more complicated to build than fission bombs, as they require two stages, and the governments which have them keep their precise mechanisms highly secret.

Whatever happened, the device appeared to have emitted a similar yield to previous North Korean tests, which means it might have been a single-stage repeat. Another possibility is a hydrogen bomb that fizzled. Or it could have been a rare, unusually low-yield thermonuclear device.

And there are other variables such as the test’s depth which could change estimations of the bomb’s yield. In short, we don’t know.

If North Korea Didn’t Detonate a Hydrogen Bomb, Then What Was It? 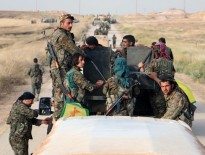 Features The Die Is Cast: The Kurds Cross the Euphrates

Features FIFA Ethics Committee Investigatory Chamber recomm…
0
wpDiscuz
We use cookies to ensure that we give you the best experience on our website. If you continue to use this site we will assume that you are happy with it.Ok