The guided-missile destroyer Hohhot (Hull 161) attached to a destroyer flotilla with the navy under the PLA Southern Theater Command steams in waters of the South China Sea during a maritime training exercise in Mid-July, 2019.  Photo: China Military

The Chinese People’s Liberation Army (PLA) Navy conducted combat-oriented drills featuring surface vessels, submarines and fighter jets in the South China Sea in late March, a month in which the US frequently sent warships and warplanes to intrude the waters.

Experts said on Thursday the drills showed the Chinese PLA Navy can effectively control and safeguard the waters as it continues to enhance its combat capabilities.

The drills demonstrated a new characteristic of the PLA Navy in the South China Sea:  multidimensional, with warships, submarines and warplanes coordinating, Wei Dongxu, a Beijing-based military expert, told the Global Times on Thursday.

The drills came after the US military frequently sent warships and warplanes into the South China Sea recently. A US destroyer passed through China’s territorial waters off the Xisha Islands on March 10, and the Theodore Roosevelt aircraft carrier strike group and the America amphibious assault ship expeditionary strike group conducted joint exercises in the South China Sea on March 15.

After the novel coronavirus epidemic broke out on the Theodore Roosevelt, the US again sent a P-3C patrol aircraft to the region on Tuesday, China Central Television reported on Wednesday, citing foreign reports.

The outbreak of COVID-19 has significantly lowered the US Navy’s warship deployment capability in the Asia-Pacific region, and an increase in warplane deployment was expected, so it can maintain its presence while also gaining related intelligence, Wei said.

With the drills, the Chinese military showed that it is capable of driving intruders and unfriendly priers away, he said. 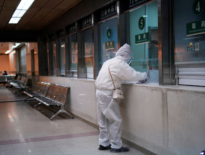 Headlines How China pulls the strings of the World Health Or…
0
wpDiscuz
0
0
Would love your thoughts, please comment.x
()
x
| Reply
We use cookies to ensure that we give you the best experience on our website. If you continue to use this site we will assume that you are happy with it.Ok