Tehran’s harsh policy in the Syrian conflict is increasingly at variance with the interests of Moscow in the region, says Russian expert Alexander Shumilin in an interview with the Russian media outlet Rosbalt.ru.

The interview with Shumilin, the director of the Center of Middle East Conflicts at the Institute for U.S. and Canadian Studies of the Russian Academy of Sciences, followed a January 15, 2019 CNN interview with Russian Deputy Foreign Minister Sergey Ryabkov.

Asked whether Russia was an ally of Iran, Ryabkov replied: “I wouldn’t use this type of words to describe where we are with Iran.” The Ryabkov interview, which does not appear on the Russian Foreign Ministry’s website, also followed accusations in the Iranian Majlis, by Majlis National Security and Foreign Policy Committee chairman Heshmatollah Falahat Pisheh, that Russia had restrained its S-300 antiaircraft system during Israel’s attack on Syria in late January 2019.[1]

In light of the above, Rosbalt.ru speculated: “The Russian mass media has painstakingly created the illusion of an apparent formation in the Middle East of a powerful anti-Western bloc of Russia, Iran and Turkey that opposed the coalition headed by the US. And now signs have appeared that such a configuration of forces in the region could change.” The outlet sounded out Shumilin on this possibility.[2]

Below is Shumilin’s interview with Rosblat.ru, headlined “Iran Is No Longer The Ally Of Russia.”[3]

Iran’s Actions Turned Into A Factor That Is

Less Satisfactory To Russia In The Syrian Conflict

Q: “How would you evaluate the declaration by Sergey Ryabkov that Iran is not an ally of Russia and Moscow is seriously concerned about Israel’s security? Can we in connection with these things speak of a serious turnabout in Russian Middle East policy?”

Shumilin: “I would say that this substantial clarification is long overdue. Ryabkov said that Iran is not an ally of Moscow in the broader sense of the word, but Russia’s partner on some questions ‘on the ground’ in Syria. The word ‘ally’ assumes a larger confluence of interests. However, it is important that two to three years ago, Ryabkov would not have said it. The variance between the interests of Russia (as the decision makers in Moscow understand them) and the interests of the Iran in Syria began to appear around a year or two ago.”

Q: “And how did this find expression?”

Shumilin: “From the beginning – in Russia’s constant desire to balance between the fundamental players in the region. Moscow strove to obtain military victories and converting them into a political process in which its importance would grow. An exit [strategy]in political decisions that were part of the context of international agreements, partially as part of the UN resolutions and the Geneva communiqué of 2012, which Russia up to now has not dismissed. Likewise, it has not rejected the idea of a political settlement in Syria under the United Nations’ aegis.

“Although in the year 2017-2018 the Astana process began that many construed as a substitute for the Geneva process. For us officially Astana is not considered a substitute, but a precursor of Geneva. Moscow likewise agreed to a political transition in Syria.”

Q: “What was envisaged under this transition?”

Shumilin: “That for a given time Assad would remain in some capacity in that country. In other words were talking about Russia’s preparedness for a Syrian solution, even without Assad. ‘As the Syrian people decides’ – that was the formula employed. All this fundamentally conflicted with the basic interests of Iran, which, as is well known, got into Syria to strengthen the figure of Assad would all available means – military and financial.

Assad was and remains for Tehran an indispensable and irremovable figure. The political process in Syria to Iran’s understanding is a procedure for translating military victories in favor of Assad and correspondingly in favor of the Islamic Republic. This Iranian policy has not changed one bit. And when Israel became actively involved in the new spiral of the Syrian conflict, the problem of Tehran’s presence in Syria became aggravated. Moscow could have mitigated this problem, but it encountered the fierce refusal of this approach on the part of Iran.

“The position of the Islamic Republic remains that it does not intend to retreat or reduce its presence in Syria. The Iranian strategy in this country has remained as it was previously – broadening its presence, including also for the sake of the struggle with Israel and reinforcing the position of Assad.

Q: “But does not Assad also remain the same irreplaceable leader for the Kremlin as he does for Tehran?”

Shumilin: “No, he doesn’t remain [such a leader], although at different stages he was such a leader for us. Until 2013, when the Syrian authorities used chemical weapons in Eastern Ghouta, and annihilated a few thousand people there, the Russian position was even formulated somewhat differently. It was not ‘glory to Assad – the legal president’, but the ‘search for a settlement’ in which Russia would enter in the capacity of a facilitator wagering on Assad.

“But the behavior of the former US Pres. Barack Obama showed that a wager on that Syrian leader was productive. The American president then brought a military fleet to Syria in order to strike Assad’s forces. But Putin convinced Obama, who at that moment was in St. Petersburg for an economic forum not to do’s this, but to compel the Syrian leader to embark on chemical [weapons]disarmament and thereby settling the issue without military interference.

“Obama agreed and received for this all that he received – the preservation of the Assad regime, the continuation of the Civil War in Syria and the mushrooming of the ‘Islamic State.’ (a terrorist organization banned on the territory of Russia).

“Then Assad was indeed useful and irreplaceable for Russia. However, subsequently he became more of a captive to Iran. Iranian instructors worked closely ‘on the ground’ with the Assad forces taking them under control. In such a manner Assad and Iran became inseparable, which compelled Israel to begin military operations in Syria formally against Iran, but inter alia, also against Assad.”

Q: “But Moscow has still retained the formula ‘Assad – the legal president of Syria’?”

Shumilin: “This is mere verbiage, because the policy that the Kremlin currently adheres to – the search for a political solution and a political transition – assumes that the fate of Assad – at the very minimum –is open to question.”

Q: “Tehran does not agree with this?”

Shumilin: “For it [Iran], there’s no room for compromise on this question. For it, everything here is hardball. The Iranian Islamic Revolutionary Guards Corps (IRGC) and other forces controlled by Iran – Hizbullah, the Shiite militias grab more and more territory and have begun dictating certain measures to Assad. For example, they are pushing him to attack Idlib province where the entire anti-Assad opposition is currently concentrated and is predominantly orientated towards Turkey.

“But let me remind you that the truce around Idlib that discourages hostilities there – is a compromise between Putin and the Turkish President Recep Erdogan that by itself caused outrage in Tehran. Putin’s balancing between Iran and Israel prejudicial to the Iranians’ position in Syria does not make them happy.

“The situation cannot be balanced for long – every strike by Israel on Tehran’s position arouses anger in the Iranian camp on all levels. There questions are being posed everywhere: ‘What about Russia? Why didn’t it respond? What about S300 supplied to Syria? Why did they not prevent the January 23 raid by Israeli aviation?’

the Iranian forces authorities by their terminology want  ‘to liberate Northwest Syria’s and that means a bloody war with the Kurds that Tehran wants to begin from Idlib. Russia is trying to somewhat soften the Iranian position, because formally we are not opposed to an attack on the Deir e Zor oilfields, but not in a way that creates a direct clash there with the Americans.

“Russia, as opposed to Iran has its hands tied. It cannot act in a way that would trigger serious retaliatory responses by the coalition headed by the US, it could not prevent raids by Israeli aviation because in such a fashion it will put itself in opposition to that country, which is backed by Washington. For this reason it has already become serious. Therefore Moscow needs to maneuver. Iran’s actions, meanwhile, have turned into a factor that is less satisfactory to Russia in the Syrian conflict.”

Q: “Can this change in Russia’s position on Iran lead to its rapprochement with the United States?”

Shumilin: “Ultimately, yes. But here it is necessary to speak cautiously. More likely this will be part of attempts to avoid a clash with the United States that assumes certain mutual understandings and coordination of actions. Any additional military movements in Syria risk clashes with America. And such clashes with the Americans already occurred a year ago in the same Deir e Zor when 300-400 ‘Wagner contract fighters’ died, and a repetition of this is unnecessary for anyone. But Iran is advancing in Syria like a tank, and getting Russia into trouble with each step, for example, by deploying all the new forces. Russia does not intend to spoil relations with Israel because of Iran.”

Q: “So it turns out that discretely a new motley coalition is beginning to emerge in Syria against Iran?”

Shumilin: “One has already taken shape– on one side Iran and Assad, and on the other all the rest.”

Russian Expert Shumilin: ‘Iran Is No Longer The Ally Of Russia’

by Memri time to read: 6 min 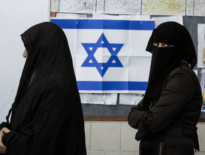 Features Exciting Election? Israel Is Snoring
0
wpDiscuz
0
0
Would love your thoughts, please comment.x
()
x
| Reply
We use cookies to ensure that we give you the best experience on our website. If you continue to use this site we will assume that you are happy with it.Ok