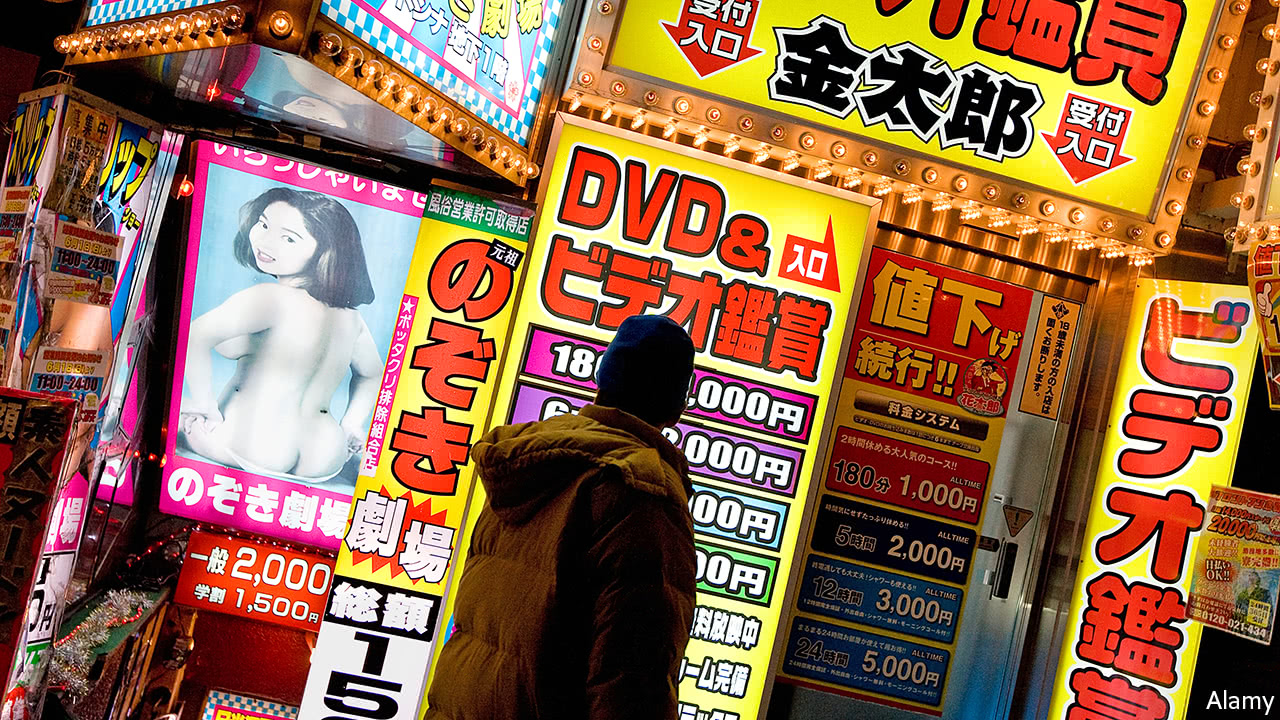 IN THE 17th century Yoshiwara, in north-eastern Tokyo (then known as Edo), was one of a number of red-light districts. Both female and male prostitutes walked the streets, offering a full range of services. Four hundred years later Yoshiwara remains a centre of the sex trade, but customers’ desires are becoming less explicit. Scores of “soaplands” such as “Female Emperor” offer men a scrub by a lingerie-clad woman, for around ¥10,000 yen ($94).

Yoshiwara’s transformation reflects broader changes in Japan’s sex industry. Reliable data are difficult to come by, but softer services seem to be gaining popularity at the expense of harder ones such as vaginal sex (which is illegal but widely available) or oral sex (which is legal). The sex trade in Japan has long been about not only intercourse, but also the yearning for intimacy and romance, says Masahiro Yamada, a sociologist, and these are the services that are growing.

The shift to less carnal services started after the second world war, when the prudish American occupiers urged the Japanese authorities, against their better judgment, to outlaw payment for vaginal sex in 1958. More recently, however, demographic and economic factors have accelerated the change. Some 28% of the population is over 65, the highest proportion in the world. The old stay healthy for longer, but are after “softer, less explicit services”, says Katsuhito Matsushima of Yano Research Institute in Tokyo.

A recent edition of Shukan Post, a weekly magazine, described how some elderly men visit soaplands “just to talk to the babes”. The owner of a “delivery-health” business, which dispatches girls to homes and hotels in Hiroshima, says that older people have replaced those in their 20s as his main customers. Rather than having intercourse, he says, they simply want to spend time in the company of young women.

At the same time, the sex industry is adjusting to cater to young Japanese who are also less interested in carnal pleasures. Once it was common for young men to lose their virginity to prostitutes in Yoshiwara, something known as fudeoroshi, meaning writing with a new brush. Now virgins often remain so indefinitely. A recent survey found that 42% of unmarried men and 44% of unmarried women had never had sex by the age of 35 (over 50% of Japanese men and over 60% of Japanese women are married by the time they are 30-34). Many young people see sex as mendokusai, or tiresome, says Mr Yamada. Services for the young are often about “doing it by themselves—quasi-sex”, Mr Matsushima says. Services that make masturbation more enjoyable are booming, such as websites that offer chats with naked girls or video parlours where men can watch adult DVDs in a private booth.

Some see all this as a sign of the decreasing confidence of Japanese men. Local media talk of “herbivores” who are fearful of independent women. Maid cafés, where women in frilly aprons blow on customers’ food before spooning it into their mouths, are packed with men (and tourists). In soineya stores, or cuddle cafés, clients pay to lie next to a girl. If they pay extra they get a pat or the woman stares directly into their eyes. Sociologists reckon the lack of confidence may also account for another trend in the sex industry: the fetishism of young girls. Some businesses, for example, give men the chance to walk or lie with someone dressed as a schoolgirl, which is legal as long as the sex workers involved are not actually of school age.

Mr Ikoma, the editor, attributes this in part to the business being more culturally accepted in Japan than elsewhere. Many companies still see fit to entertain clients in the equivalent of strip clubs, while pornographic magazines are sold in most convenience stores. And whether or not Japanese men are losing their taste for penetrative sex, they are not short of creative alternatives.