Inspired by Scientific American’s terrific September issue, which celebrates the 100th anniversary of Einstein’s theory of general relativity [see Addendum], I’ve dusted off an essay I wrote for The New York Times a decade ago. Here is an edited, updated version. See also my followup post, “Einstein, The Anxiety of Influence” and “The End of Science.” —John Horgan

When Stevens Institute of Technology hired me a decade ago, it installed me for several months in the department of physics, which had a spare office. Down the hall from me, Albert Einstein’s electric-haired visage beamed from a poster for the “World Year of Physics 2005.” The poster celebrated the centennial of the “miraculous year” when a young patent clerk in Bern, Switzerland, revolutionized physics with four papers on relativity, quantum mechanics and thermodynamics. “Help make 2005 another Miraculous Year!” the poster exclaimed.

As 2005 wound down with no miracles in sight, the poster took on an increasingly poignant cast. Passing the office of a physics professor who made the mistake of leaving his door open, I stopped and asked the question implicitly posed by the “Year of Physics” poster: Will there ever be another Einstein? The physicist scrunched up his face and replied, “I’m not sure what that question means.”

Let me try to explain. Einstein is the most famous and beloved scientist of all time. We revere him not only as a scientific genius but also as a moral and even spiritual sage. Abraham Pais, Einstein’s friend and biographer, called him “the divine man of the 20th century.” To New York Timesphysics reporter Dennis Overbye, Einstein was an “icon” of “humanity in the face of the unknown.” So to rephrase my question: Will science ever produce another figure who evokes such hyperbolic reverence?

I doubt it. The problem isn’t that modern physicists can’t match Einstein’s intellectual firepower. In Genius, his 1992 biography of physicist Richard Feynman, James Gleick pondered why physics hadn’t produced more giants like Einstein. The paradoxical answer, Gleick suggested, is that there are so many brilliant physicists alive today that it has become harder for any individual to stand apart from the pack. In other words, our perception of Einstein as a towering figure is, well, relative.

Gleick’s explanation makes sense. (In fact, physicist Edward Witten has been described as the most mathematically gifted physicist sinceNewton.) However, I would add a corollary: Einstein seems bigger than modern physicists because–to paraphrase Norma Desmond in Sunset Boulevard–physics got small.

For the first half of the last century, physics yielded not only deep insights into nature–which resonated with the disorienting work of creative visionaries like Picasso, Joyce and Freud–but also history-jolting technologies like the atomic bomb, nuclear power, radar, lasers, transistors and all the gadgets that make up the computer and communications industries. Physics mattered.

Over the past few decades, many physicists have gotten bogged down pursuing a goal that obsessed Einstein in his latter years: a theory that fuses quantum physics and general relativity, which are as incompatible, conceptually and mathematically, as plaid and polka dots. Seekers of this “theory of everything” have wandered into fantasy realms of higher dimensions with little or no empirical connection to our reality.

Over the past few decades, biology has displaced physics as the scientific enterprise with the most intellectual, practical and economic clout. Of all modern biologists, Francis Crick (who originally trained as a physicist) probably came closest to Einstein in terms of scientific achievement. Together with James Watson, Crick unraveled the twin-corkscrew structure of DNA in 1953. He went on to show how the double helix mediates the genetic code that serves as the blueprint for all of life.

Just as Einstein vainly sought a unified theory of physics, so Crick in his final decades tried to crack the riddle of consciousness, the hardest unsolved problem in science. (“We probably need a few Einsteins” to solve the problem, artificial-intelligence maven Rodney Brooks once wrote.)

But neither Crick nor any other modern biologist has approached Einstein’s extra-scientific reputation. Einstein took advantage of his fame to speak out on nuclear weapons, nuclear power, militarism and other vital issues through lectures, essays, interviews, petitions and letters to world leaders. When he spoke, people listened.

After Israel’s first president, the chemist Chaim Weizmann, died in 1952, the Israeli cabinet asked Einstein if he would consider becoming the country’s president. Einstein politely declined–perhaps to the relief of the Israeli officials, given his commitment to pacifism and a global government. (While awaiting Einstein’s answer, David Ben-Gurion, the prime minister, reportedly asked an aide, “What are we going to do if he accepts?“)

It is hard to imagine any modern scientist, physicist or biologist, being lionized in this manner. One reason may be that science as a whole has lost its moral sheen. The public is warier than ever of the downside of scientific advances, whether nuclear energy or genetic engineering. Moreover, as modern science has become increasingly institutionalized, it has started to resemble a guild that values self-promotion above truth and the common good.

Einstein also possessed a moral quality that set him apart even in his own time. According to Robert Oppenheimer, the dark angel of nuclear physics, Einstein exuded “a wonderful purity at once childlike and profoundly stubborn.”

The aspiring scientists and engineers I encounter at my school give me hope that science has a bright future. But I suspect that we will never see Einstein’s like again, because he was the product of a unique convergence of time and temperament.

Einstein, incidentally, didn’t think he lived up to his own reputation. “I am no Einstein,” he once said. On top of all his other qualities, the man was modest.

Addendum: In the September Scientific American, physicist Brian Greene also asks, “Could there be another Einstein?” He responds: “If one means another über genius who will powerfully push science forward, then the answer is surely yes. In the past half a century since Einstein’s death, there have indeed been such scientists. But if one means an über genius to whom the world will look not because of accomplishments in sports or entertainment but as a thrilling example of what the human mind can accomplish, well, that question speaks to us—to what we as a civilization will deem precious.” Note Greene’s implication: If science doesn’t produce another Einstein, it’s nonscientists’ fault.

Einstein, “The Anxiety of Influence” and “The End of Science.”

See also my Q&As with physicists George Ellis, Carlo Rovelli, Garrett Lisi,Paul Steinhardt, Lee Smolin and Steven Weinberg–and my profile of Weinberg, which discusses at length the quest for a final theory of physics.

Was I Wrong about “The End of Science”?

Why There Will Never Be Another Einstein 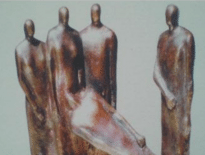 Magazine Impact of the Syria conflict in the town of Salami…
0
wpDiscuz
We use cookies to ensure that we give you the best experience on our website. If you continue to use this site we will assume that you are happy with it.Ok