Trending
You are at:Home»Categories»Headlines»Why Should an Israeli Arab Vote?
By Salman Masalha on 22 August 2019 Headlines

As a crude generalization, one could say that democracy rests on three things: government by the majority of the state’s citizens via representatives elected for fixed terms in free elections; respect for the rights of minorities and their representatives; and complete equality before the law for all citizens, irrespective of religion, race or gender. All the rest derives from these three principles.

For any regime to crown itself with the title of a democracy, these three principles must exist simultaneously. Removing any one of them necessarily strips the regime of its “democratic” title.

If you consider Israel’s characteristic political behavior since its inception by these yardsticks, you’ll reach the sorry conclusion that real democracy doesn’t exist in this country. It’s true that ever since its establishment, Israel has complied with the principle of free, democratic elections with secret balloting. Moreover, Israel’s government can be replaced by voters expressing their will in the polling booth. But this principle remains isolated; the other two have never existed.

Once again, it must be stressed that the fact that the first principle – that is, the existence of democratic elections – is being upheld doesn’t entitle the country to be called a true democracy, for the reasons explained below.

Because Israel has defined itself ever since its establishment as a Jewish state, it has cast the religious aspect of its nationality in stone. This is Zionism’s original sin, from which it has been unable to free itself to this day.

Now is the time to ask the hard questions and demand satisfactory answers. If Israel doesn’t belong to “Israelis,” irrespective of religion, race or ethnic background, what are citizens of the state who weren’t among those who received the Torah at Mount Sinai supposed to think? How is an Arab citizen residing in his homeland, which for historic reasons received the name “Israel,” supposed to relate to the citizenship imposed on his forefathers, or which he received by virtue of having been born in his own land?

It’s inconceivable that any state’s nationality shouldn’t include all the state’s citizens without exception. The moment the state and all its institutions are run according to an unequal hierarchy among its citizens, regardless of the reason or the background, and ranks them on a scale which doesn’t comply with the principle of civic equality, it deliberately commits suicide. By so doing, it digs the pit into which it will fall by its own hands and loses the right to be called a democracy.

Various political science professors will undoubtedly rush to claim that Israel is Jewish, just like Greece is closely tied to the Greek church. Perhaps we need to remind professors of this Zionist variety of what they have forgotten: Greece existed as a polity, a language and a culture long before the Greek church entered the world. Therefore, this is a fundamentally ludicrous claim. Judaism, as we know it, doesn’t need Israel to exist.

The anti-civic and anti-democratic processes taking place in Israel in recent years have peaked with the nation-state law, which was approved by the last Knesset. Against this background, it’s no wonder that none of the people aspiring to become prime minister in the upcoming election has even let the possibility of joining forces with the Arab minority’s Knesset representatives to present a true civic alternative to the existing government cross his lips. Representatives of the Arab parties also never mention the possibility of joining any alternative government whatsoever.

As things now look to everyone, an Arab citizen has no incentive to go out and vote. The most his vote could achieve is the establishment of a Jewish-national unity government, from whose establishment he would remain excluded.

Is a country in which a sizable portion of the citizens has never been taken into account worthy of being called a democracy? That’s a laugh.

Why Should an Israeli Arab Vote? 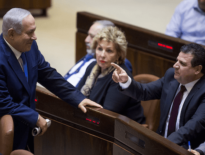 Features Yes, I’m going to vote in the Israeli election

Headlines Fake Cigarette Ring Exposes Jordan’s Corruption …
0
wpDiscuz
We use cookies to ensure that we give you the best experience on our website. If you continue to use this site we will assume that you are happy with it.Ok