On May 1, 2018, a Swedish Air Force S102B Korpen has started operating in the eastern Med.

The aircraft is one of two SwAF’s S102B Korpen aircraft, heavily-modified Gulfstream IVSP business jets used to perform ELINT missions. These aircraft have been in service with the Swedish Air Force since 1992, when they have replaced the two TP85s (modified Caravelle airliners formerly belonging to the SAS airline) that had been operated for 20 years since 1972. They are equipped with sensors operated by ELINT personnel from the FRA (the Radio Establishment of the Defence), capable to eavesdrop, collect and analyse enemy electronic emissions. As we have often reported here at The Aviationist, the Korpen jets routinely conduct surveillance missions over the Baltic Sea, flying high and fast in international airspace off the area of interest. The most frequent “target” of the S102B is Kaliningrad Oblast and its Russian installations. For this reason, the Swedish ELINT aircraft are also frequently intercepted by Russian Su-27 Flankers scrambled from the Kaliningrad exclave’s airbases.

Anyway, it looks like the Swedish airplane has now pointed its sensors to the Russian signals in Syria, deploying to Larnaca, Cyprus: the example 102003/”023″, using callsign “SVF647”, was tracked, by means of its ADS-B/Mode-S transponder, twice on May 1, flying off Syria, Lebanon, Israel and Egypt, more or less in the very same way many other aircraft (U.S. Navy P-8s, U.S. Air Force RQ-4 and RC-135s) have been doing for some weeks.

Here’s the first mission in the morning on May 1: 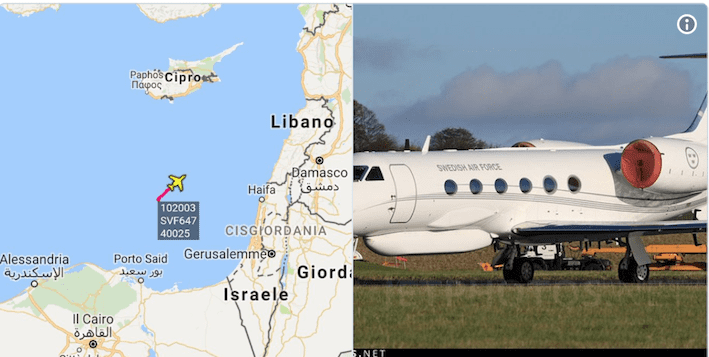 Considered the quite unusual area of operations, one might wonder why the Swedish S102B is currently operating close to the Syrian theater, so far from home. We can just speculate here, but the most likely guess is that the aircraft is collecting ELINT off Syria to acquire new baseline data for assets that are deployed there and which may either be currently or imminently deployed in Kaliningrad. Possibly surface vessels too, which might add to the Baltic Electronic Order of Battle. “I think they are just acquiring ELINT that is unique to Syria and might have applications in the Baltic,” says a source who wishes to remain anonymous.

For sure, with all the Russian “hardware” deployed to Syria, often referred to as a “testbed” for Moscow’s new equipment, there is some much data to be collected that the region has already turned into a sort of “signals paradise” for the intelligence teams from all around the world.