Watching pan-Arab media as I do, and as I have on a regular basis for decades, two items caught my eye this week. One was the Qatari Ministry of Foreign Affair’s condemnation of the ISIS attack on Coptic Christians in Al-Minya.[1] The second was seeing Al-Jazeera TV feature prominently official Qatari statements on the close counter-terrorism cooperation between that country and the United States. The two, rather ordinary, statements were jarring because Qatar regularly supports or coddles a range of regional Islamists who sincerely believe that both Christians and Americans are enemies, to be opposed, subjugated or destroyed. Of course, there is a background to these news items.[2]

Usually, false news seeks to deceive and to present the opposite of reality, to propagate false information. Such does not seem to be the case in the current bitter controversy between Qatar and its GCC neighbors in Saudi Arabia, the United Arab Emirates and Bahrain.

The crisis, which has roots going back decades, was triggered by material posted, supposedly by hacking, on the Qatari News Agency website on May 23, 2017, saying that the country’s emir had made a series of controversial statements.[3] These included that Qatar was withdrawing its ambassadors from Saudi Arabia, Egypt, Kuwait, Bahrain and the UAE; that it opposed a hostile stance against Iran; and that it looked favorably on the Muslim Brotherhood (MB), Hamas, and Hizbullah.

The remarks, which had allegedly been made at a military graduation by Emir Tamim bin Hamad Aal-Thani, also acknowledged tensions with the U.S. over terrorism. Gulf media responded forcefully, detailing Qatar’s history in supporting terrorist groups including the Taliban and Al-Qaeda’s Jabhat Al-Nusra, and how the country was breaking with the “Arab consensus” opposing Iranian regional aggression.[4] One Saudi daily cheerfully featured the front-page headline “Qatar Has Lost Its Mind.” 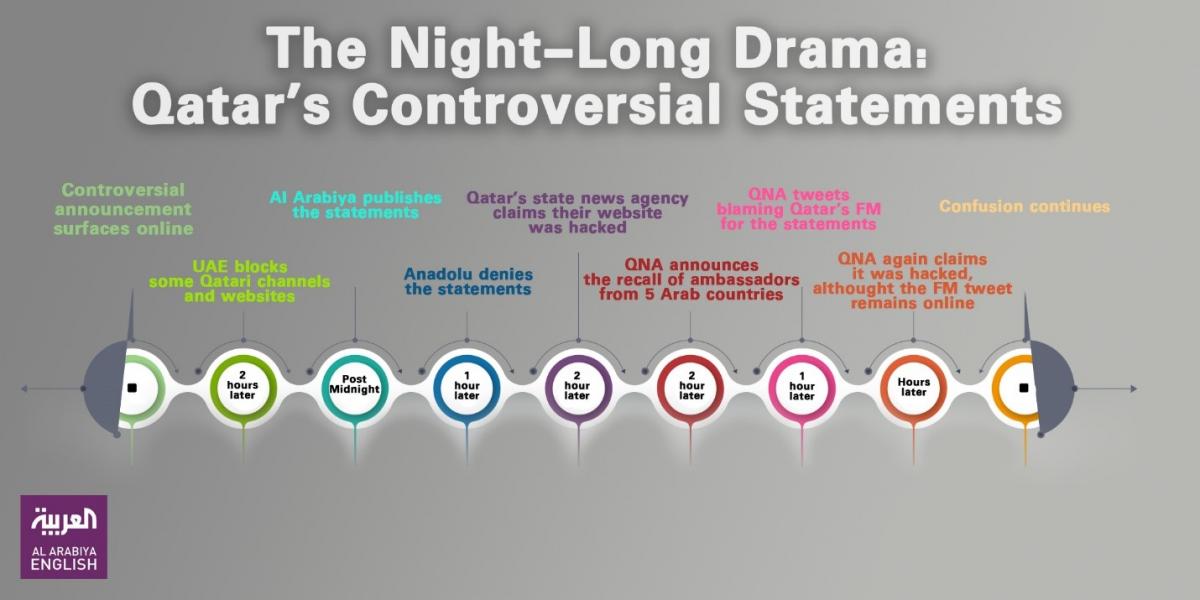 The crisis, wherever it started, is a repeat of one that occurred in 2014 for many of the same issues. And that confrontation was a continuation of tension that had supposedly been resolved in a 2013 meeting and agreement between the rulers of Saudi Arabia and Qatar. Qatar’s stance on the MB and on Iran loom large throughout, as it continued to be an aggressive outlier from the position of many of its neighbors. In 2014, the Qataris frankly acknowledged this, noting that “Qatar has chosen not to be historically marginalized but to play a major part in world affairs.”[5] Once again, as in 2014, Qatar is seeking the mediation of Kuwait, to bridge the gap between itself and its angry neighbors.

There is no doubt that the State of Qatar, a small country with a lot of money, does seek to play an oversize role in world affairs. It is hosting the 2022 Soccer World Cup and has sought to bring peace and development to Sudan’s troubled region of Darfur. In the Middle East, it strongly supported the MB government of Egyptian President Morsi and the AKP government of Turkish President Erdogan. It hosted for years, and still does to some extent, MB opposition leaders from the region (some of the Egyptian ones recently left for Turkey). Despite acknowledging this presence on Qatari soil, Qatar’s foreign minister recently stated, “We do not, will not, and have not supported the Muslim Brotherhood.”[6]

Qatar lavishly funds an influential regional Arabic television network, Al-Jazeera, which consistently takes an Islamist, particularly pro-MB, line in its spin. Of course, Al-Jazeera became globally known for its initial airing of early Osama bin Laden videos, but as recently as 2015 it was airing lengthy uncritical interviews with the head of Al-Qaeda in Syria, Abu Muhammad Al-Julani. One source described these as seeming like a “chat between two close friends, rather than an interview.”[7]

It also recently began funding another media conglomerate, the London-based Al-Arabi Al-Jadeed, headed by former Israeli Arab Knesset Member Azmi Bishara, supposedly to provide a media outlet that is less pro-MB than Al-Jazeera.[8] Ironically, Bishara, a Christian from Nazareth who is close to the Qataris, fled Israel in 2007 and found refuge in Doha because of accusations that he had collaborated with the Lebanese terrorist group Hizbullah, which had launched a bitter war against Israel only the year before.[9]

As if to flaunt his ties with Iran, Qatar’s Emir spoke with Iran’s president at the height of the controversy with its GCC neighbors.[10] According to Iranian media, the Emir called for the expansion of ties. This is an act which seemed to be guaranteed to pour more oil on already burning fires.

Qatar’s history of giving terrorist financers considerable freedom is very well documented, and its record since Emir Tamim took over since 2013 is, at best, mixed.[11] The Trump administration has been touting a new agreement fighting terrorism financing with GCC states, including Qatar, signed during the President’s recent visit, but it is too soon to tell if this will presage real change in Qatari behavior.[12]

If one had to pick a side in this fight, one would tend to lean towards the criticism of Qatar’s critics who are generally on more solid ground than Qatar’s frankly incredible avowal that it has never supported Islamists and jihadis. However, this must be tempered with the realization that almost all Arab regimes in the Middle East have played a double game, and some still do. They denounce intolerance and jihadism on the one hand, but they often give space to Islamist bigotry on the other.

Few are willing to ask the question on the difference between calls for violence and bigotry coming from the MB and calls for bigotry and violence coming from Salafis who are often coddled by these same regimes. Both occur with some frequency. A Coptic Christian or an atheist former Muslim is going to find little comfort in his life being threatened by the ire of a Salafi rather than by that of an Ikhwan (MB member), or vice versa.

Qatar’s critics would be on stronger ground if they themselves did not all too frequently persecute liberals, secularists, and Muslim free thinkers in their own countries – which in a very real way does the dirty work of the Islamists for them. If the past few years of ISIS’s Salafi-jihadi rule prove anything, it should be that governments in the region allowed their media, pulpits, textbooks, and schools to nurture a generation of scorpions.

Rather than just focusing on Qatar’s very real failings, a more aggressive regional effort to create a broader environment for real tolerance, for liberal voices, and for real religious and intellectual diversity would show up Qatari support for intolerant and violent voices in even greater relief.  Rather than bickering over who the grand mosque in Doha should be named after, perhaps regional powers can finally agree that Muhammad Ibn Abdul Wahhab’s political legacy, like MB founder Hassan Al-Bana’s, both belong to the region’s grim past and not to its hopeful future.[13]