He might be the second Abraham that “all” peoples of Middle East adored most in history, and he was in Jerusalem this week. Turkish legend Ibrahim Tatlıses rejoiced an Israeli generation whic grew up with his songs in a stunning concert and surprised the ones that didn’t know about him and resurfaced Israeli affection towards Turkish popular culture.

Well, this is not the first time he storms Israel. Making his first tour to Tel Aviv for 4 concerts in 1989, Turkish legend conquered hearts again in 2003 at Frederich Mann Hall, where Michael Jackson had taken stage a week before. The average price for 3 hours of performance had risen up to 300 US Dollars on the event day, quadrupling the Jackson’s.

At that night in 2003, as one of the top moments of his sensational career, Tatlıses waved at the audience with “Alsalam Alaykum wa Shalom” and came off the stage after he said “I love you Israel”. 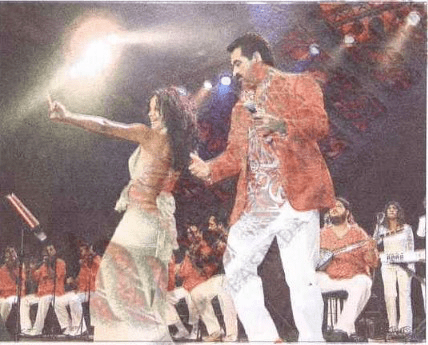 This performance by Tatlıses and his orchestra in Israel was not only of symbolic importance. No joke, even today, millions of fans in Turkey click on the 2003 Israeli concert record on Youtube to listen to their favorite songs instead of the original records and mention this on Twitter.

70-year-old singer was born in Turkey’s mostly Kurdish-populated southeastern province of Sanliurfa. Son of an Arab father and a Kurdish mother, he started to earn his living as a construction worker at the age of 9, his reputation with his famous poignant voice first got beyond the borders of the Southeast, then of Turkey.

Becoming known as “Emperor” and “Ibo”, Tatlises released more than 30 albums, sold millions of copies throughout Middle East. In the recent years, Noa Kirel in Israel, Nassif Zeytoun in Syria, Elissa and Wael Kfoury in Lebanon covered his beloved songs and hit hundreds of million views on Youtube.

Ibo’s peak years in Turkey coinciding with the emergence of the “Kurdish issue” made him a natural ambassador for a possible peace process. Tatlıses was once prosecuted for singing Kurdish folk songs at a concert in Sweden in December 1986 on the grounds of “spreading separatist propaganda”.

Politically outspoken in the ’90s, when asked why he’s encouraging peace talks, “Israel made peace with Palestine, why can’t Turkey?” Tatlıses replied to reporters.

Having quiet sincere relation with President Erdoğan, Turkish legend took the stage with Kurdish folk singer Siwan Perwer and sang in Kurdish at the famous Diyarbakır rally in 2013, one of the pinnacle moments for the historic Kurdish Peace process during AKP era. Yet, the rapidly transforming climate in Turkey made him box the compass, like many others.

İbo went to Afrin with Chief of General Staff Hulusi Akar and President Erdoğan during the Northeastern Syria operation of the Turkish Armed Forces in 2018, chanted military folk songs, this time in a bid to promote the war with Kurdish forces.

Despite everything, İbrahim Tatlıses is one of the rare figures whose voice can pass through “all” borders in the region without the need for a passport. Although the last concert in Jerusalem is seen as a reflection of the positive relations Turkey has recently developed with Israel, this admiration towards Tatlıses is not an exception within the trend, which didn’t lapse even at the times when Turkey-Israel relations were at a rock bottom.

No doubt that warming relations and depreciation of Turkish Lira against other currencies since 2016 urged more Israelis to travel. Today, Turkey is number one of tourist destinations for Israelis. In 2019, before the global COVID-19 pandemic, more than 507,000 Israeli tourists visited the country. 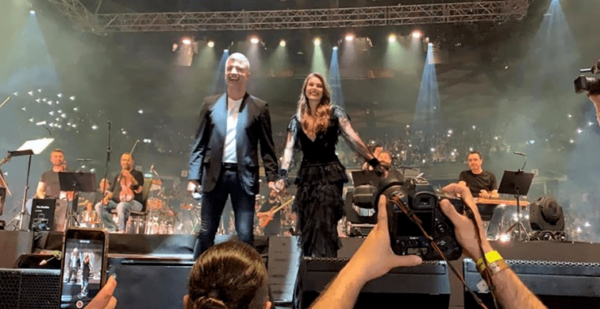 Turkish TV series on the rampage around the world since the 2010s certainly had a great influence on this curiousity. While Turks were burning Israeli flags in protest against air raids in Gaza and Netanyahu/Erdogan slurring each other on the rallies, Israelis at home watched Turkish series and fell in love with the actors/actresses.

Viva Plus, one of Israel’s cable TV channels, has been broadcasting numbers of Turkish series since 2013. And, according to statistics, each episode of the series ‘Istanbul’s Bride‘ viewed more than 1 million times. Özcan Deniz, the leading actor of the series, when he visited Israel for a concert in 2019, attracted a great deal of attention and admiration that perhaps he has not seen in Turkey in the recent years.

In 2014, the TV series “Magnificent Century” set records in Israel. The costumes, storyline, successful acting and intrigues of the Suleiman the Magnificent’s era, succeeded to attract the attention of the Israeli people. Once, the channel flooded with telephone calls when an episode of the series was not broadcast due to a technical malfunction.

This is a love that no crisis, not even a imminent deadly threat could reduce. An affection which ultimately disappointed Iran who saw the Israelis in Turkey as a soft spot and planned an attack in Istanbul… Traveling to Turkey is the “new cool” among Israeli women. Even Natalie Oknin, Israeli bus driver who was arrested under the suspicion of a Mossad tie in Turkey was also the victim of this fondness when she sent photos of Erdogan’s mansion to her bigger family’s WhatsApp group as a show-off. 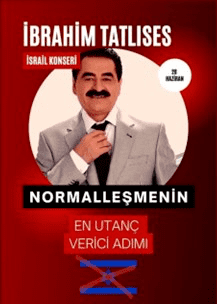 Sign in Turkish reads “Tatlıses concert, the most embarrasing step on normalization between Israel and Turkey”

It is hard to mention a similar affection on the Turkish side. Ibrahim Tatlıses’s Israel tour raised eyebrows in Turkey, and caused anger on Islamist quarters in social media. Accusing him of “collaborating with zionists and entertaining Jews”, some pro-Erdogan social media users posted banners like “the most embarrassing step of the normalization”.

There is no considerable attraction over any Israeli product either. However, the Turkish television supervisory board, infamous with the eagerness on broadening the censorship sphere, so far have not restricted any of the dozens of Israeli-made series/films broadcasted on Netflix Turkey.

Speaking to the Turkish media after the concert on Tuesday evening, Tatlıses’ manager said:

“In Israel, we saw a generation that grew up with his songs. I mean we were expecting a good atmosphere already, but not something enormous like this”!

he unfortunately turned his back to kurds at the end