The alarming normalcy of a society split into mutually distrustful camps

In his famous and much-criticized 1993 Foreign Affairs article, “The Clash of Civilizations,” the late Samuel Huntington described Turkey as a “torn country.” For Huntington there is an irreconcilable difference between the Western-style political institutions of the Republic of Turkey and the Islamic cultural and civilizational foundations of Turkish society. It was a controversial assertion in a controversial article, though Turkey’s current prime minister (and political scientist), Ahmet Davutoglu, made a similar claim in his 1984 dissertation. I disagree with both professors. Turkey may not be “torn” in the way that Huntington and Davutoglu believe, but it is tearing itself apart in a war with itself.
Related Story

Turkey Is in Serious Trouble

The background for Saturday’s horrific bombing is about another seemingly irreconcilable difference, that between Turkish and Kurdish nationalism. Ever since Mustafa Kemal Ataturk founded the Republic after the defeat of the Ottoman Empire in World War I on a specifically ethno-nationalist basis that made “Turkishness” a singular attribute of identity, expressions of Kurdish identity have been suppressed, often violently. In return, Kurdish alienation has often been expressed through force. The most recent example is the three-decades-long war between the terrorists of the Kurdistan Workers’ Party (PKK) and the Turkish state. There are, of course, many Kurds who are well integrated in the political, social, and economic life of Turkey. This has considerably less to do with any flexibility or accommodation on the part of the state or the dominant social group—Turks—than an apparent willingness on the part of the Kurds to accommodate themselves to the mainstream culture and negotiate their way in it. 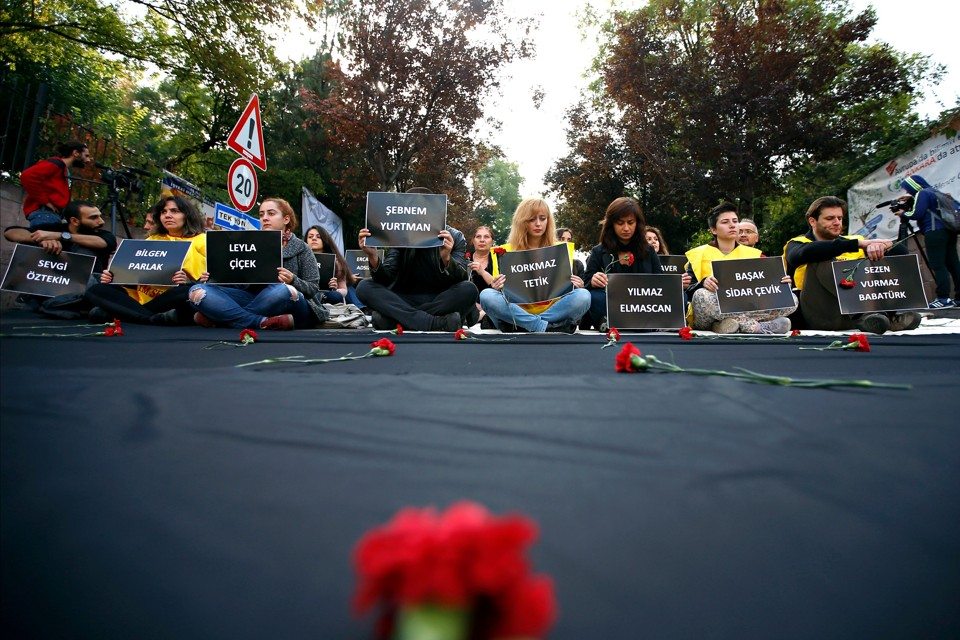 Students of Ankara University hold placards with the names of those killed in Saturday’s deadly explosions during a sit-in protest in Ankara, Turkey, Tuesday, Oct. 13, 2015. Authorities in Istanbul banned a protest rally and march by the same trade union and civic society groups who lost friends and colleagues in Turkey’s bloodiest terror attack. Dogan news agency video footage on Tuesday showed police pushing back dozens of demonstrators trying to reach the rally to commemorate the 97 victims of the twin suicide bombings. Some demonstrators were detained.(AP Photo/Emrah Gurel)

That the conflict between nationalisms is the central drama of Turkish politics does not mean that one could not imagine its resolution. The problem has always been politics and the way that politicians—leftist, rightist, centrist, Islamist, secular, and Kurdish—have leveraged the conflict to advance their own agendas. And so the “Kurdish question” has become a permanent feature of Turkey’s politics. And yet this conflict is only the toxic context for a series of other struggles—some well established, some new—that have contributed to the current moment in which bodies are piling up on Turkish streets at an unprecedented rate (even by the bloody standards of the late 1970s when violence between leftist and rightist political forces wracked the country, killing about 4,500 people). Today, the conflicts roiling Turkish society include:

Beyond the immediate tragedy of the Ankara bombing, this is an environment rife with hard-to-resist opportunities for politicians to deepen Turkey’s instability. This is particularly so as November 1 approaches—the date set for the rerun of the country’s June national elections.

The unfortunate reality is that Turkish society is now made up of mutually distrustful camps.

President Recep Tayyip Erdogan’s opponents would have it that he and the AKP caused Saturday’s violence and the Suruc and Diyarbakir bombings before it. This seems unlikely, though “cause” can be an expansive term. At the very least Erdogan’s political strategy going back to the run up to elections last spring, but actually further back to the local elections of March 2014, is a testament to how the combination of unbounded ambition, the political conflicts outlined above, and identity can radicalize a society. No matter who is directly responsible for Saturday’s bombing—the Islamic State, the PKK, or some other group—Kurds, who have overwhelmingly been the victims of these kinds of attacks, have been portrayed as collectively subversive. They are terrorists or terrorist sympathizers who seek to undermine Turkey’s unity.

None of this is new, but it has taken on a new urgency especially since the June elections when the legal Kurdish-based party, the HDP, earned 13 percent of the popular vote. This vote total denied the AKP a parliamentary majority and a pathway for Erdogan to force a new constitution that would give him his coveted “executive presidency.” Erdogan’s nationalist gambit and the bloodcurdling rhetoric that has gone with it, which seeks to connect the HDP with the terrorists of the PKK in order to push the former below Turkey’s 10-percent parliamentary threshold, has made Kurds—all Kurds—a target.

The PKK has a role to play in creating an environment of violence. The murder of two police officers while they slept in Sanliurfa on July 22 was reported to be the work of a PKK youth wing only marginally under the control of the organization’s leadership. Be that as it may, the PKK was itching for a fight as the peace process, which began in 2013 between the group and the Turkish government, faltered. Also, the organization’s leadership seems unwilling to countenance the rise of the HDP with is own charismatic leader who is committed to playing by the existing rules of the Turkish political game and has been successful at it. It seems that the AKP, the nationalist hardliners of the MHP, and the PKK have an abiding political interest in cutting the HDP down to size. Needless to say, the cycle of violence Turks and Kurds are currently enduring serves that purpose.

The unfortunate reality is that Turkish society is now made up of mutually distrustful camps. The political sniping between the AKP and the HDP as well as the CHP’s disingenuous call for the resignations of the justice and interior ministers and accountability are little more than pre-election posturing that only reinforces the political polarization that is contributing to Turkey’s bloody impasse. Accountability would be welcome and likely advance Turkey’s ever-elusive search for national unity, but the set of conditions necessary for this kind of leadership simply do not currently exist. All of the political incentives for Turkish politicians actually run in the opposite direction, encouraging them to use the deaths of more than a hundred people to delegitimize their opponents and win votes. This does not make Turkish politicians any more craven than politicians elsewhere, but in the context of Turkey’s encounter with Kurdish nationalism and its myriad of related political struggles, the resulting suboptimal outcome is more blood.

I was in Istanbul very briefly last week; about 36 hours. I spent part of the time chatting with my Turkish friends about the elections, the war in Syria, and the conflict with the PKK. The profound sense of unease and uncertainty was revealing. No one knew where Turkey was headed after November 1, but it was also clear that the principles and ideals of democratic politics and the importance of Western-inspired political institutions had become embedded in their minds. So much for Huntington. I spent the other part of my time wandering around Kadikoy on the Asian side of the Bosphorus, eating and snapping photos of everyday life, including AKP, CHP, and HDP activists electioneering. It was fun to play tourist for a day and it all seemed so normal, even if there was a war going on in the country. After Saturday, that is the part that is so worrying. The normality of a country at war with itself.