It seems that not all 35 Olympic Federations are concerned with the IOC’s increasing demand for good governance in sports. Critics are targeting the International Shooting Sport Federation (ISSF) for its governance practices.

Consequently, a federation getting the highest possible score on all included indicators in this survey would achieve an SGO index of 100%.

The ISSF fell rock bottom on this list with a score of only 27.3%. By comparison, the scandal-ridden FIFA got 67.8%.

This week, the ISSF will be in Moscow for Executive Committee Meeting, Administrative Council Meeting, and General Assembly and little information seems to be given to national shooting federations on what the agenda will be. Playthegame.org has information that requests for meeting agendas and information about budgets, revenues and financial condition for the ISSF from various federations have been met with sparse information. 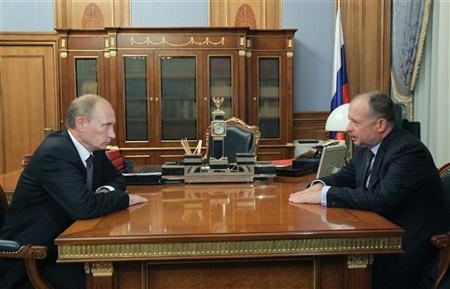 Several sources have told playthegme.org that the family-run ISFF (the administration has been run by the Schreiber family for decades) is preparing a silent change of president from the 82 years old Mexican Olegario Vázquez Raña to the Russian billionaire and oligarch Vladimir Lisin, already President of the Russian and European Shooting Confederations and Vice President of the Russian Olympic Committee, even though Vázquez Raña has two years left of his term. The ISSF denies such plans.

President since 1980
Vázquez Raña, who is a close ally of IOC president Thomas Bach, was first elected president in 1980 and has been continually re-elected to hold the same position for the past 36 years. His older brother Mario, who died in 2015, also yielded much international influence as co-founder and President of the Association of National Olympic Committees (ANOC) from 1979-2012, among others. If the General Assembly of the ISSF can agree on giving the present president Olegario a role as Honorary President, the road is open for changing president in advance of the ordinary election in 2018.

Most likely, the new name will be Vladimir Lisin, who was elected Vice President of ISSF only two years ago. Another possible candidate is the Italian Member of Parliament and Vice President of the ISSF, Luciano Rossi. Should Vázquez Raña retire before the four year period ends, this will be seen as controversial in some fractions of the shooting family.

Sheikh Salman blamed his countryman, the IOC and FIFA representative and ANOC president Sheikh Ahmad Al-Sabah, for his failure to win the presidential election. Sheikh Salman was at the time accused of abusing his position in the Kuwaiti government to garner votes from the shooting federations. The ISSF has since said that it was investigating Sheikh Salman for ethics breaches.

In a statement, the ISSF said that during Sheikh Salman’s campaign to become ISSF President in 2014, they experienced that he showed “little sensitivity for a democratic process, the autonomy of sports and ethical behavior within an election process”.

Proposed changes in the constitution
Originally, the General Assembly and the other ISSF meetings this week should have taken place in Rio de Janeiro, but the location was changed to Moscow due to the increased costs of accommodation because of the Olympics, playthegame.org is told. Nobody knows what the meetings and the accommodation costs will be in Moscow or who pays for it. One can only speculate.

Confronted with these speculations and rumours, ISSF Communication Manager Marco Dalla Dea tells playthegame.org in an email that:

Debate on the Sports Governance Observer 2015
The Play the Game SGO 2015 study has been carefully noticed among national shooting federations. Playthegame.org has seen letters signed by the National Rifles Association of Pakistan addressing all members of the ISSF begging for answers to why the ISSF ranks so low on the SGO index.

The National Rifle Association of Pakistan also claims that the ISSF has done nothing to fulfill the demands on Good Governance of the IOC adopted as part of the Agenda 2020 in December 2014 and that these matters should be addressed at the General Assembly in Moscow this week.

In June this year, Dr. Safe Mohamad, the Vice President of the African Shooting Federation, presented to the ISSF Secretary General the results of the Play the Game SGO study, requesting for necessary procedures to be undertaken by the ISSF in order to determine the responsibilities, and requesting to add this serious issue to the agenda of the next ISSF General Assembly Meeting in Moscow.

In an email to Safe Mohamed and a number of national federations, Secretary General Franz Schreiber answered that:

“[T]he ISSF regards this document [the SGO study 2015, ed.]as a flawed study that did not objectively or responsibly evaluate the good governance criteria they selected, at least with regard to the ISSF. In our 9 June response to you, we emphasized ‘the study authors failed to obtain input from the ISSF before reaching their conclusions’. We do not know where they obtained their information about the ISSF, but they did not obtain it from us.

“We do not believe there is any need to appoint another committee to analyze this report because the ISSF has already completed a detailed analysis of the complete study. In addition to the examples we cited in our previous correspondence, our analysis found numerous other instances where the real ISSF situations were not accurately rated. The findings of this study were reported to the ISSF Executive Committee when it met on 1 March 2016. The Executive Committee was satisfied that the Danish study conclusions were inaccurate and false, but decided not to pursue the matter any further.”

“With regard to your request for ISSF financial statements, the ISSF has already provided to all Member Federations the 2014 audited statement with the General Assembly documents that were sent several weeks ago. The ISSF just received a translated copy of the 2015 statement and will provide it to all federations when you check in at the General Assembly.”

ISSF answers playthegame.org
On direct questions to Secretary General Franz Schreiber on where the supposed flaws, inaccurate and false information can be found in the SGO 2015 report, ISSF Communication Manager Marco Dalla Dea, answers to playthegame.org, on behalf of Schreiber:

”…the ISSF indeed identified some incorrect assumptions on which ISSF’s SGO scores have been based, e.g.:

Regarding indicator 3.2 the SGO 2015 Study states that the ISSF accounts are not audited. This is not correct. […] The audit reports are presented to and approved by the ISSF Members within the ISSF General Assemblies and published afterwards.

“Like all the other 34 international Olympic federations, the ISSF was invited to contribute data and make comment on our research findings. Quite a few federations responded to the emails and letters we sent them, but unfortunately the ISSF chose not to. We hope they will be more cooperative when we repeat the analysis within the next couple of years.”

“Concerning the Play the Games SGO 2015 Study, the ISSF indeed identified some incorrect assumptions on which ISSF’s SGO scores have been based, e.g.:

– In respect to indicator 4.5 (see also page 114) the SGO 2015 Study states that the ISSF does not offer any form of consultancy to member federations in the areas of organization and management. However, the ISSF has been organizing workshops for National Federations since 13 years on an annual basis regarding the organization of National Federations including inter alia education on anti-doping regulations, etc. All the related documents and guidelines are public and available on our website.

In order to improve inter alia the ISSF governance, the upcoming ISSF General Assembly 2016 is asked to approve a complete new version of the ISSF Constitution. Furthermore, the ISSF has approved earlier this year a revised  ISSF Code of Ethics also containing new rules on conflict of interests, bribery, etc (see here).”