Trending
You are at:Home»Categories»Headlines»Time Is Running Out
By Michael Young on 9 December 2019 Headlines
In an interview, former minister Nasser al-Saidi explains

why Lebanon’s financial revival will be a massive undertaking.

Nasser al-Saidi is a Lebanese economist who served as first vice governor of Lebanon’s Central Bank in 1993–2002 and as minister of economy and trade in 1998–2000. He was chief economist and strategist of the Dubai International Financial Center, and acts as an advisor to governments, central banks, and regulators in the region. He is currently the founder and president of Nasser Saidi & Associates. Diwan interviewed Saidi in early December to get his views on the financial crisis that Lebanon is facing today, and to ask him what steps are needed to install financial stability in the country. The monumental task ahead is why Saidi said that any new government willing to grapple with Lebanon’s financial problems would effectively face a politically suicidal undertaking.

Michael Young: You’ve described the way Lebanon has been raising money in recent decades as a “Ponzi scheme.” Can you elaborate on what you meant?

Nasser al-Saidi: A Ponzi scheme develops when promised returns on investments are paid to existing investors from funds contributed by new investors. How did this happen in Lebanon? Successive governments have been fiscally reckless, with an average budget deficit of 8.5 percent of GDP since 2010. The high levels of government borrowing along with high interest rates led to a “crowding out” of the private sector and a sharp decline in investment and domestic credit to the private sector. This resulted in dismal economic growth and now a recession.

In tandem, the Central Bank raised U.S. dollar interest rates to attract deposits of the Lebanese diaspora and foreign investors to help finance Lebanon’s twin deficits—the persistent current account deficits and the budget deficits. Higher interest rates raised the overall cost of government borrowing and led to a “crowding out” of the public sector: Government deficits were increasingly financed by the Central Bank. In turn, banks preferred to deposit at the Central Bank rather than risk lending to the private sector or the government, earning rates on U.S. dollar deposits exceeding international rates by 600 to 700 basis points. They were paid 8 percent and more, while international rates were 1 percent.

By 2016, the flow of remittances and capital inflows that served to finance Lebanon’s twin fiscal and current account deficits started declining. The Central Bank attempted to shore up its international reserves and preserve an overvalued exchange rate by increased borrowing from the banks through so-called “financial engineering” schemes and swap operations. It also engaged in a massive bailout of domestic banks—in excess of $5 billion—that had suffered large losses on their foreign operations in Turkey, Syria, Saudi Arabia, and other countries.

While in the United States and Europe such bailouts after the 2007–2009 global financial crisis were undertaken by governments as part of their fiscal operations in return for equity and through the imposition of conditions, no such conditionality was imposed by Lebanon’s Central Bank. Financial engineering, swaps, and other quasi-fiscal operations led to a ballooning of its balance sheet, from 182 percent of GDP in 2015 to 280 percent by October 2019, the highest ratio in the world. The growth in Central Bank assets—largely Lebanese government bonds and T-bills—was financed by more bank borrowing at high interest rates and led to a growing liquidity crunch for the private sector.

The bottom line is that the Central Bank was financing government budget deficits and monetizing the public debt through bank borrowing, earning less on its “assets” than it was promising and paying the banks. Increasingly, it was paying high returns on deposits from fresh money from domestic banks and international borrowing.

NS: The de facto, informal capital, payments, and exchange controls imposed by the banks, with the implicit consent of the Central Bank, are intended to control capital flight, given the growing loss of confidence in the sustainability of government finances and the ability of the banking system to continue financing government deficits. But the self-declared bank holidays only brought on panic by depositors and investors. Indeed, the measures were self-defeating: Capital and foreign exchange controls, along with payment restrictions, while temporarily protecting the banks and the international reserves of the Central Bank, have generated a downward spiral in trade and economic activity and will result in an increase in non-performing loans, directly hurting banks.

In addition, the imposition of controls is left to the arbitrary discretion of the banks, which has generated heightened uncertainty concerning transactions and payments, and has led to a drying up of capital inflows and remittances, weakening the net foreign asset position of the banking system. International country evidence shows that while capital controls can be effective as part of a policy toolkit, they are not a substitute for the well-structured macroeconomic, fiscal, financial, and monetary reform program that Lebanon needs.

MY: Today there is a liquidity crunch, which has dire consequences for a country very heavily reliant on imported goods. Given that the Central Bank appears to have much lower reserves than initially announced, does Lebanon have any other choice than to go to the international community for such liquidity?

NS: Given the large level of sovereign and Central Bank debt—a total of LL150,183 billion, of which LL82,249 billion is Central Bank debt as of the second quarter of 2019—and the direct exposure of the banking system, with 70 percent of bank assets being in government and Central Bank paper, Lebanon will need to turn to the international community. The promised CEDRE Conference commitments made by a group of donors and investors in April 2018 will have to be renegotiated and recast into a multilateral economic stabilization and liquidity fund. This fund will be subjected to conditionality relating to fiscal, sectoral (electricity, water, transport, and other), structural, and financial reforms.

MY: Can the banking sector survive the current shock?

NS: The banking sector, including the Central Bank, is at the core of the required macroeconomic and financial adjustment program, given that it holds an overwhelming share of public debt. Public debt (including Central Bank debt) will have to be reprofiled and restructured. For example, a domestic Lebanese pound debt reprofiling would repackage debt maturing over 2020–2023 into new debt at substantially lower rates, maturing over the next five to ten years. Similarly, foreign currency debt can also be restructured and repackaged into longer maturities, benefiting from a guarantee of the CEDRE participants, which would drastically lower interest rates. The suggested debt reprofiling and restructuring operations would result in substantially lower debt service costs from the current 10 percent of GDP and would create fiscal space during the adjustment period.

There will have to be a bail-in by the banks and their shareholders, accompanied by a consolidation and restructuring of the banking system. In turn, the extensive bail-in means that a large recapitalization and equity injection will be required to restore banking system soundness and monetary stability.

MY: Where do you see Lebanon going in the coming months? What dynamics will be in play?

NS: Absent the formation of a confidence rebuilding and credible new government and rapid policy reform measures, the current outlook is a deepening recession, growing unemployment, with a sharp fall in consumption, investment, and trade. It will also come with a continued depreciation of the Lebanese pound on the parallel market, resulting in rapidly accelerating inflation and a decline in real wages, along with a sharply growing budget deficit due to falling revenues. As a result, financial pressures on the banking system will increase, with a scenario of increasing ad hoc controls on economic activity and payments, and market distortions.

MY: What would you do at this stage to prevent the worst from happening? Can you outline a realistic step-by-step process the government and the banking sector can adopt to emerge from the financial mess they’ve created.

NS: Time is running out. A new government needs to be formed, dominated by non-partisan, independent, competent “technocratic” ministers known for their integrity, endowed with extraordinary decisionmaking powers, and willing to sacrifice their political future, given the difficult policy decisions required. Effectively, this would be a “hara-kiri government.” The government should, within weeks, prepare and start implementing a comprehensive macroeconomic, fiscal, monetary reform program with a clear policy road map including the implementation of structural reforms. While the policy road map should include deep structural reforms—for example pension system reform—these can be sequenced, but need not be implemented immediately.

The immediate priority is to address the interlinked currency, banking, fiscal, and financial crises. For the adjustment program to be credible, public finances must be put on a sustainable path through dramatic and sustained fiscal adjustment to reduce debt and the budget deficit—requiring a massive primary surplus of 6 percent of GDP, excluding interest payments. The state must also resize the public sector and restructure the financial system through a reprofiling and restructuring of public debt, including Central Bank debt. Lebanon will need to call on the international community to support its adjustment program through a reconfigured, recast CEDRE program. As part of the program, the Central Bank’s reserves will need to be supported by bilateral Central Bank swap lines. External multilateral funding worth some $20–25 billion (35–45 percent of GDP) will also be required.

These painful measures require a broad and strong political commitment. The choice is between market-imposed, disorderly, and painful adjustments, meaning a hard landing, or self-imposed reforms that are credible and sustainable. However, nothing indicates the ruling political class and policymakers are ready for these difficult choices. Nor is there political courage and capacity for reform.

Time Is Running Out 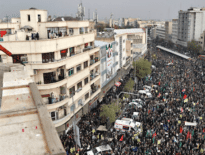 Headlines The Fuel of a Revolution 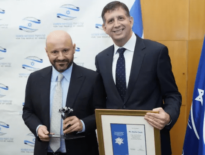 Headlines Lebanese man who gave Nazi items to Israel: Antise…
0
wpDiscuz
We use cookies to ensure that we give you the best experience on our website. If you continue to use this site we will assume that you are happy with it.Ok