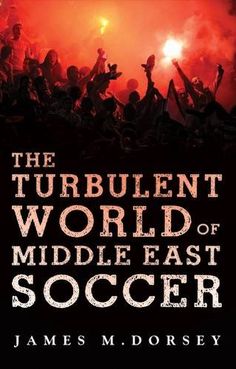 James M. Dorsey introduces the reader to the world of Middle Eastern and North African football — an arena where struggles for political control, protest and resistance, self-respect and gender rights are played out. Politics was the midwife of soccer in the region, with many clubs being formed as pro- or anti-colonial platforms and engines of national identity and social justice. This book uncovers the seldom-told story of a game that evokes deep-seated passions.

Football fans are shown to be a major political force and one of the largest civic groups in Egypt after the Muslim Brotherhood: their demands for transparency, social justice, and an end to corruption sparked vicious street battles that left scores dead and thousands wounded. Discontent in Algeria erupts regularly at matches where fans demand the ouster of military leaders. A folk-song crooning national goalkeeper leads protests in Homs, Syria’s third largest city and scene of some of the worst violence perpetrated by Bashar al-Assad’s regime. In a country that bans physical education for girls, Saudi women have established clandestine football clubs and leagues. The book further tells the story of Somali child soldiers turned soccer stars and Iranian women who dress as men to smuggle themselves into stadiums to watch matches.

James M. Dorsey is an award-winning journalist and a senior fellow at the S. Rajaratnam School of International Studies at Singapore’s Nanyang Technological University. He is Co-Director of the University of Würzburg’s Institute of Fan Culture, a visiting scholar at its Institute of Sport Science, and author of the The Turbulent World of Middle East Soccer blog.