It is in the dog days of summer that the dirty deeds get done.

A good habit for European and North American investigative journalists is to check government press releases at the beginning of the July 1st/4th weekend and the Friday before the Christmas Holidays. For it is then, when most people are rushing out the door for their holidays, that bad news emerges from guilty corporations, complicit government departments and cunning media spokes people.

In sports corruption, the equivalent are the weeks/months just after those massive sporting events – the Olympics and World Cup – have ended. During those tournaments every time an athlete sneezes someone declares there is a influenza epidemic. As soon as they are over, and the journalists and fans turn their attention away, the knives and corruption comes out.

Back now at my desk after a summer of really interesting work on a new project. Details to follow, but, for now, lets survey what happened during those seeming dull, lazy days of summer. For as the media’s attention was focused on the beach, the corrupt status quo was re-established in sports around the world.

The Cost of Doing Business

In Italian football, the corruption continues.

Well, that is a redundant sentence. What can you say about a league that even the President of the country suggested should be shut down and cleaned up properly? That was in 2011. It was not shut down and the corruption in Italian football goes on.

At some point some genius is going to show that three of the European countries who have had wave after wave of match-fixing corruption scandals – Greece, Italy and Turkey – did not qualify for this year’s World Cup.

This is no surprise. When a wide number of matches are turned into theatre that the overall quality of the players and teams goes down. Ask Singapore and Malaysia. They used to dominate Asian soccer in the 1970s. Now, after decades of match-fixing scandals, they are sporting after-thoughts (except in match-fixing where their people could win gold medals and their police could win medals for hypocrisy).

The latest Italian scandal is that in June the Parma football team got promoted to Serie A (the top division). Cue the near inevitable controversy when outside investigators discovered that one of the Parma players was offering cash to opposition players to lose one of the last matches of the season.

In one of those ‘Conspiracies of One’ that the Italian Football Federation is so fond of, the player was found guilty and Parma was deducted five point and fined 30,000 Euro. However, in the quiet dog days of August, the IFF waived Parma’s five point deduction and decreased their fine to a mere 20,000 Euro.

Some context. The jump from Serie B to A in Italian football is worth millions of Euro. That is why there exists a grey market where the clubs buy and sell points after a certain point in the season. Teams that do not need the points sell them to teams that want to avoid relegation or, like Parma, get promoted.

If there was a fix, you can be sure that the price was far higher than 20,000 Euro. In the future, a pittance like that will not discourage fixing. Rather dishonest club owners will think it as simply the cost of doing business.

Here is how organized crime works. They establish territories. If you try to sell drugs, stolen property, run burglary operations or extort businesses in their area, you had better pay them a large percentage of your profits. If you do not pay them money, then trust that they will attack you until you pay or die.

That has been the essential model for organized crime since the Medicis in Renaissance Florence to Mob Godfathers of the United States to the Russian oligarchs.

It is also the model for FIFA.

At this point, a skeptical reader may think, “Hold on! You cannot seriously compare an international sporting organization like FIFA with a bunch of mobsters? They may be corrupt and venal but surely they are not like Mafiosi?!”

Actually, the model fits very well. At least that is what the American justice system says. When some of FIFA’s leaders were convicted last year in a high-profile trial at the Southern District of New York, the judges, the prosecution and the defense lawyers all agreed that FIFA fitted the definition of an organized crime syndicate.

What FIFA does is say, “We run soccer. No one else in the world can organize any football match unless they pay us, or one of our national associations, a tax (part of every player’s registration fee).” In return, FIFA protects these national soccer associations from any outside pressure – like police or judicial investigations. 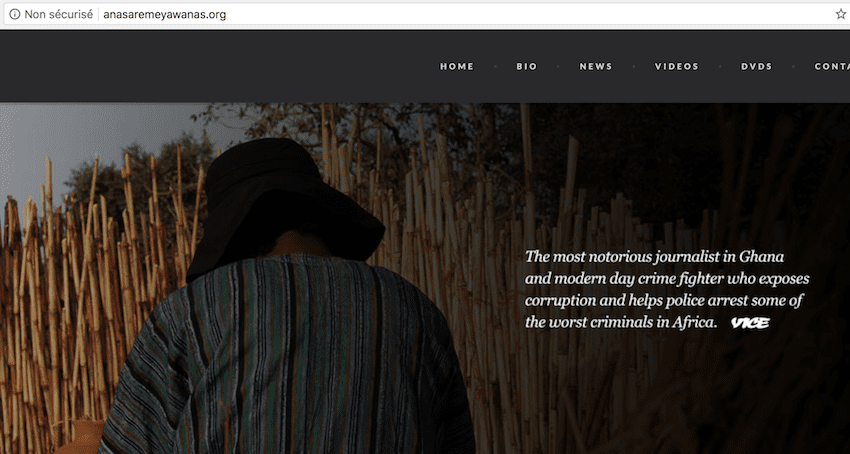 The best example from the last few months is in Ghana. In June – at the same time of the original Parma investigation in Italy – the investigative journalist Anas Aremeyaw Anas aired a series of documentaries showing that virtually every level of Ghanaian football – from referees to the President of the National Association – took payments of cash. The scandal rocked the country and the national association was suspended by the government.

Again in the sleepy days of August when few people were paying attention, FIFA told the Ghanaian government that if they did not stop ‘interfering’ they would be banned from any international soccer tournaments.

The government essentially backed down and the same organization – FIFA – that oversaw the system that produced so much corruption is back in charge.

They did not mention their name. In the final moments of the man’s life, after he had given them so much there was no mention of them. Why not?

In the official obituary of Mike Lee, the greatest sports media orchestra conductor of this generation, there was no mention of Qatar.

Mike Lee was a brilliant genius. If you are a sports fan he created dreams and visions that you consumed without being aware of them.

Lee was one of the most powerful men in international sports and he did much of his work behind the scenes. He worked successfully to gain the 2012 Olympics for London, the 2016 Olympics for Rio de Janeiro and the presidential FIFA election for Gianni Infantino.

He also was a key player in Qatar’s extraordinary winning the hosting rights for FIFA’s 2022 World Cup. This was one of the greatest successes of any media spinner anywhere at anytime. Thanks to Lee and other colleagues, Qatar, a desert city with a tiny population and no infrastructure, beat out sporting and economic giants like Australia, Japan and the United States.

Lee continued to work for the Qataris when they established the ridiculous International Centre for Sport Security (ICSS) and Sports Integrity Global Alliance (SIGA). These are the ostensible third party agencies that call for sports ethics while downplaying all the sporting controversies surrounding the Qataris (widespread human trafficking in the labour to build their World Cup infrastructure and the allegations that they had paid bribes to much of the FIFA Executive Committee to obtain the rights to the 2022 World Cup).

Last week, Mike Lee, sadly, died of a heart attack. For all his influence and impact on one of the most controversial countries in the sporting world. His obituary on his company’s website – Vero Communications – made no mention of his extensive work for Qatar. It was a notable omission as there was lots of former clients mentioned – including the 2018 Buenos Aires Youth Olympics and the inclusion of surfing as an Olympic sport.

This is not the moment to assess the full impact of the Cardinal Richelieu of international sports world but it is to say that even in his official obituary the spin did not stop.

The Death of WADA’s Credibility

If you cannot get the dirty work done during the hot days of summer, then at least do it somewhere far away and remote. On Thursday, September 20th expect the dead body of the World Anti-Doping Agency’s (WADA) credibility to be washed up on the hot sandy beaches of the Seychelles.

In 2015, WADA launched two extraordinary investigations that proved the Russian sporting authorities and anti-doping agency had instituted a near-mandatory program of doping for their athletes. Their work had established a bizarre but very well-organized cheating system

Russia’s official re-entry into the Olympics rested on two key provisions. One, they should fully admit that WADA’s investigations (subsequently confirmed by the IOC in a separate investigation) were credible. Two, the Russians should allow WADA’s investigators into a Moscow laboratory identified by whistleblowers as the centre of the doping system.

The Russians have done neither. What they have done is express regret that this situation has taken place.

This is like catching the little boy with his hands in the cookie jar. You tell him that he should have no more cookies. He says that your eyesight is wrong and he regrets being caught.

At this week’s conference, held in the distant islands of the Seychelles the IOC and WADA are preparing to re-admit the Russians into the sporting. The UK anti-doping athlete commission calls it “a catastrophe for clean sport’. Travis Tygart, the head of United States anti-doping agency and the man who successfully investigated Lance Armstrong, says “it stinks to high heaven.”

It is far more than that, it is the effective killing of WADA. Once, a proud defender of clean, drug-free sports, with the re-admission of a non-compliant Russia, WADA has been reduced to a sad, corpse of an institution.

The dirty deeds of a long, hot summer.