London:  Ever since Bilawal Bhutto Zardari led PPP delegation to APC he has been in the news. Most positive comments have been made about his stand on the urgency and need of national unity in the face of increasing heat on the Indo-Pakistan border along the Line of Control. His appeal to all to rise as a unified nation to counter Indian offensive — both on the diplomatic front and on the borders — has gone well across the country and multifaceted political spectrum.

What made it more powerful was his assurance to the otherwise doddering PML-N government that his party and himself stand by it solidly in this hour of crisis notwithstanding the fact there are differences over the failure of the prime minister, his kith and kin to make themselves accountable for the PanamaLeaks on his family’s holding of offshore accounts and alleged money laundering.

He said that being son of Shaheed Mohtarma Benazir Bhutto that was not his politics. He reminded that it was his revered mother who was very conveniently branded a security risk by those who could not face her politically. Her was and his politics is above all that. In the same context he said that he never ever called MQM Quaid -“Uncle Altaf”- a traitor. Adding that “Uncle Altaf” was and is today a leader who enjoys mandate of his people and it needs to be respected.

BBZ rightly took a serious exception to Tehrik-e-Insaf leader Imran Khan’s unsolicited advice to PPP that it should also follow minus-one formula and discard its leader former President Asif Zardari. Obviously IK was referring to infamous formula that had been coined by the wheeler-dealers of the Establishment in trying to pressurize MQM since long to get rid of its Quaid Altaf Hussain as a pre-condition for MQM’s acceptability as a political entity in country’s power game notwithstanding the fact that its electoral mandate has survived despite the best efforts of powers that be replace it with IK’s PTI in Karachi. Despite manipulative fingers of the umpires MQM’s road bank could not tampered in favour of PTI.

BBZ’s matured utterances need to be underscored by senior politicians especially those who are very fond of calling their opponents as traitors whenever at political cross purposes. I remember that during the tenure of General Pervez Musharraf Shaheed Bibi was invited by the Confederation of Indian Industry as key note speaker at its annual conference in Delhi. She addressed in a pin drop silence over 2000 captains of Indian industry. Her address besides role of women, covered poverty, need for poverty alleviation and peace between India and Pakistan.

Benazir Bhutto’s emphasis was to break away from the stranglehold of the legacy of the past and reconstruct relations on the basis of mutual peaceful co-existence with a view to bettering the lot of those millions living below poverty line in the two countries. Referring to the core issue of Kashmir she said let’s not be hostage to the past, move on and build mutual confidence through trade and softening of the borders.

Bhutto reiterated that Simla agreement provides a basis of bilaterally negotiated settlement without prejudice to the United Nations resolution and in accordance with the aspirations of the Kashmiri people. Indeed it is Simla agreement that has kept the two-nuclear neighbours at peace for nearly 43 years to date. Among other things, the surviving legacy of Simla agreement is the Samjhota Express (Friendship Express) started in July 1976 that continues even to this day despite war clouds.

Lo and behold in Pakistan with push button operation General Pervez Musharraf’s team of media mongers, spin doctors and two of his federal ministers went berserk in calling her a traitor and a security risk. Ministers also accused her of receiving money for talking of peace and confidence building measures including trade, trains service and softening of borders.

GPM’s spokesman Major General Rashid Qureshi also criticised her visit and her comments. It was apparent that the regime was not able to digest the royal welcome Benazir received including her meetings with Prime Minister Vajpayee, Union Ministers LK Advani, Jaswant Singh and Congress leader Sonia Ghandi. Her media coverage was unprecedented. It would require a separate article to recall how later after her visit from India GPM followed on the dotted lines Benazir’s recommendations for confidence building and conflict management.

Bhuttos, Pakistan, democracy and empowerment of the people – are synonymous to each other. Martyred Zulfikar Ali Bhutto’s grandson and Benazir’s own scion BBZ with a grand legacy of sacrifices – is fast meeting British newspaper’s headline on his advent in politics — “Son also rises”. In three letters a whole blue print of BBZ’s political future was laid to be watched. And of late BBZ is truly showing that he is a Bhutto.

I got a glimpse of ZAB in Bilawal when he decided to participate in Kashmir Rally at Trafalgar Square two years ago. Some PTI boys – newly enthusiastic in politics – without the consideration of the nature of the congregation that everyone with some standing was welcome to express and his party’s solidarity with the Kashmir cause, resorted to throwing cans and bottles to disrupt BBZ from speaking.

Undeterred Bilawal continued speaking. However, at one stage an officer of the Metropolitan police in charge of security went up to BBZ and told him there seems to be a threat to his life. And that’s when true Bhutto emerged in him. He opened his shirt –“They want to kill me, let them. I will not go till I finish my speech.” He bravely stood his ground and finished his speech calling for unity and full support for the people of Kashmir. That day I recalled newspaper headline “Son also rises” and felt that Bilawal has the proverbial ZAB dare in him. Surely in the murky horizon of Pakistani politics a new star is born, brighter than the others. 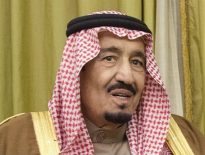 Headlines How Israel can contribute to Saudi’s vision … 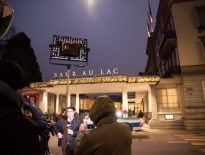 International Sports FIFA Moves On From Luxury Hotel Where Officials We…
0
wpDiscuz
0
0
Would love your thoughts, please comment.x
()
x
| Reply
We use cookies to ensure that we give you the best experience on our website. If you continue to use this site we will assume that you are happy with it.Ok