Trending
You are at:Home»Categories»Politics»The Saudi Snub
By Simon Henderson on 16 May 2015 Politics

The White House’s bottom line for Camp David is to limit public condemnation of the emerging deal with Iran, but the Saudi king’s decision not to attend signals persistent Gulf Arab disquiet with U.S. diplomacy.

The presidential retreat at Camp David, Maryland, may be on a mountaintop, but the May 14 talks there between President Barack Obama and representatives of the Gulf monarchies will not be a summit. The absence of Saudi King Salman is being spun by the White House as of little consequence, but it is hard not to conclude that the Saudi decision is anything less than a huge and intentional diplomatic snub.

The principal issue is, without doubt, Iran and the emerging deal over its nuclear program, which in the Gulf’s eyes validates Tehran’s nuclear status and strokes its aspirations to be the regional hegemon. Despite Secretary of State John Kerry’s efforts during his visit to Riyadh last week, the Gulf Arabs appear unconvinced by the substance of the deal and downright skeptical of U.S. views of its implications for stability in the region.

King Salman’s cancellation came less than a day after the White House had said there would be a one-on-one meeting between Obama and the Saudi monarch. So far, the White House has not spun Salman’s boycott in terms of a logistical challenge, such as the king’s refusal to be flown in a helicopter. (His predecessor, King Abdullah, “did not do helicopters,” one official in George W. Bush’s administration told me. When staffers arranged a meeting at Bush’s Texas ranch, the monarch was forced to travel, like some rock star, in a luxury bus.)

Despite soothing words from new Saudi Foreign Minister Adel al-Jubeir, the real Saudi position became more apparent when the king’s substitutes — Crown Prince Muhammad bin Nayef and Deputy Crown Prince Muhammad bin Salman — stopped in Paris on their way to the United States for talks with French Foreign Minister Laurent Fabius, who has taken the hardest line in the negotiations with Iran. The meeting comes just a week after French President Francois Hollande was guest of honor in Riyadh at a GCC meeting, the agenda of which was essentially a dress rehearsal for Camp David.

For those keeping count, Hollande met four GCC heads of state in Riyadh, while Obama will meet just two in Washington this week. Of the other royal no-shows, Sheikh Khalifa bin Zayed al-Nahyan of the United Arab Emirates and Oman’s Sultan Qaboos are probably not well enough to travel, while Bahrain’s King Hamad bin Isa al-Khalifa likely acted out of monarchial solidarity with King Salman. The two heads of state who are heading to Washington are Kuwaiti Emir Sheikh Sabah al-Ahmed al-Jaber al-Sabah, age 85, and Emir Tamim bin Hamad al-Thani of Qatar, age 34.

Gulf societies are traditionally hierarchical, with a focus on position and age, so managing the protocol of the sessions — particularly the “portrait” at the end of the Camp David meeting — could be challenging. In King Salman’s absence, arguably the key character will be his son, Mohammed bin Salman, who is often described as thirty-something but who may be only 29 — and who certainly has better lines of communication to the Saudi monarch than his older cousin, Mohammed bin Nayef, who officially leads the Saudi delegation.

Will Mohammed bin Salman be present at the expected bilateral meeting with Obama, making a one-on-one into a two-on-one? At the very least, Camp David will give the president a chance to get to know the king’s son. The only public information about his attitude toward the United States is a WikiLeaks memo that noted he refused to go to the U.S. embassy to receive a visa because it would require him to be fingerprinted, in the words of the current king, “like some criminal.”

Mohammed bin Nayef is regarded as bureaucratic Washington’s favorite prince for his cooperation on counterterrorism in his other role as interior minister. The White House, however, may not share this view: In a recent interview with the New York Times‘s Tom Friedman, Obama blamed Gulf interior ministers like bin Nayef for enforcing a system where there are “no legitimate political outlets for grievances.”

While Saudi Arabia is receiving all the attention, the meetings could also shed light on how other Gulf royals are adapting to Washington’s outreach to Tehran. Will Emir Sabah of Kuwait, who advocates conciliation rather than confrontation but whose territory lies closest to Iran, be given center stage? And what may Emir Tamim of Qatar, a state that is traditionally the maverick within the GCC, be plotting? Some hint may emerge at a briefing by Qatari Foreign Minister Sheikh Khalid bin Muhammad al-Attiyah to Washington foreign policy types on the early afternoon of May 13.

The most energetic person at Camp David may be Crown Prince Muhammad bin Zayed of Abu Dhabi, who is leading the UAE delegation. Though he doesn’t brief the media or think-tankers, he is rumored to be as disappointed as anyone with the Obama administration’s perceived naivete on Iran. But the crown prince is walking a fine line: he believes the way forward is simultaneously to hug the United States while aligning himself with Saudi Arabia’s Mohammed bin Salman, who he perceives as the future leader of the kingdom — sooner rather than later.

The elephant in the room will obviously be Iran, which the GCC blames for supporting Syrian President Bashar al-Assad’s regime, exerting a malevolent influence over Iraqi Prime Minister Haider al-Abadi’s government, backing the Houthi rebels in Yemen, and inciting mischief among Shiites in Bahrain and Saudi Arabia’s oil-rich Eastern Province. But there will be a smaller elephant in the room as well: Israel.

Jerusalem’s opposition to the Iran deal is compounded by the evident mutual distrust and dislike between Obama and Prime Minister Benjamin Netanyahu. Until King Salman’s cancellation, it seemed as if Netanyahu could be painted as being the odd man out at the party. As the Washington Post‘s David Ignatius, often a good proxy for Obama White House thinking, wrote last week: “It’s a peculiar reversal of roles, in which the Gulf Arabs…are becoming the responsible and conciliatory opposition, while Netanyahu…remains at loggerheads with Obama.” Although it is probably too much to think of an open Israeli alliance with Gulf Arabs against Iran, it does seem that the Gulf capitals find the Israeli perspective on Tehran’s intentions more convincing than U.S. offerings.

For Israel, a louder Gulf chorus voicing concerns about any deal is probably too much to hope for. The White House’s bottom line for Camp David is to stop any condemnation of the emerging deal with Iran by the Gulf Arabs. That is still possible — but the other signal likely to emerge from the meetings is the Gulf states’ persistent disquiet with the Obama administration’s diplomacy, which is sure to be noted by both Tehran and in the capital of every U.S. ally across the world. 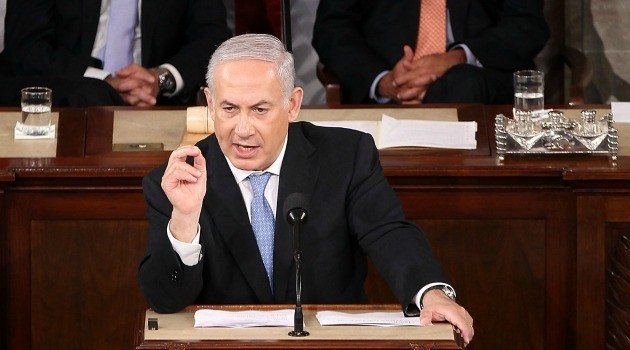 Commentary The Most Overlooked Line in Netanyahu’s Address…
0
wpDiscuz
We use cookies to ensure that we give you the best experience on our website. If you continue to use this site we will assume that you are happy with it.Ok