The international coalition members conducting airstrikes in Syria include the United States, Bahrain, Canada, Jordan, Saudi Arabia and the United Arab Emirates. According to information provided by the Pentagon in daily briefing at total of 1077 airstrikes were conducted in Syria in the first six months of 2015. More than half of the airstrikes targeted the ISIS targets in the area around Kobani. 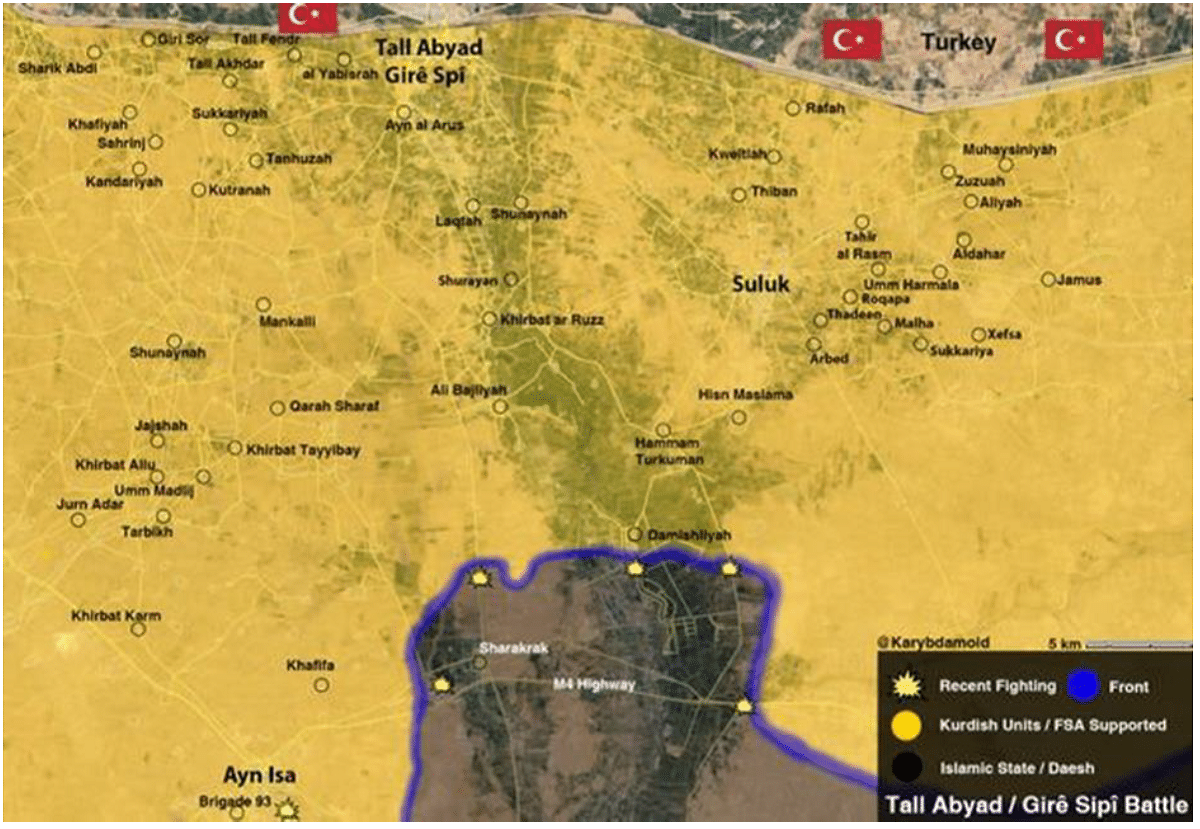 The attacks were conducted as part of Operation Inherent Resolve which has as its mission “to eliminate the ISIL terrorist group and the threat they pose to Iraq, Syria, the region, and the wider international community.” The airstrikes conducted by the coalition in 2015 did not target the Syrian army, Jabhat al-Nusra or the Khorassan Unit. In September 2014 the campaign of airstrikes started with the U.S. taking out multiple Khorassan Unit targets in the wider Aleppo area, a place where al-Qa’ida had been operating a series of safe houses since 2003.

This analysis is based on the daily U.S. Department of Defense statements about the airstrikes: 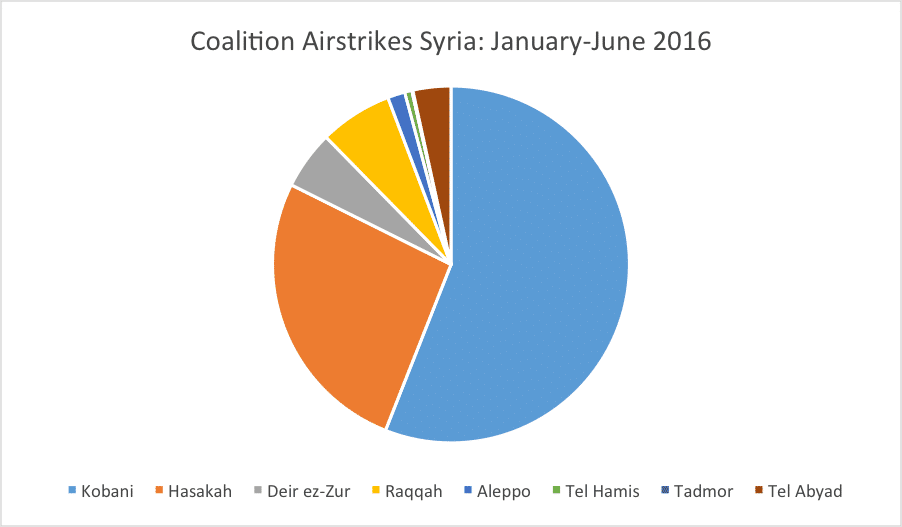 In total 924 airstrikes where in support of the Kurdish YPG militia in Northern Syria. Around Kobani 603 airstrikes took place, in Hasakah 284 and, in June 2015, 37 strikes took place near the border town of  Tel Abyad, where the YPG started an offensive, with support of the FSA, to push back ISIS in their main province of Raqqah. Also in June, the coalition air forces bombed 35 targets near Raqqah, the same amount of air raids as in the previous five months.

Most of the targets are ISIS assets, including tanks, armored vehicles, AAA guns and ISIS tactical units. Other targets included ISIS fighting positions and headquarters.

As most of the targets are in direct support of defending or supporting YPG forces, there is a real difference with airstrikes by coalition forces in the eastern province of Deir Ez-Zur. In the first six months of 2015 the province of Deir ez-Zur, including the border town Albukamal, got 57 coalition airstrikes. Most of the airstrikes took place in the months of January (17 airstrikes) and June, with 18 airstrikes. The airstrikes in the Deir ez-Zur province are different from other areas where the air strikes are directly linked to ongoing fighting. More than half of the airstrikes in Deir ez-Zur are linked to the area’s economical infrastructure and the Coalition targeted oil collection points, well heads, a refinery, oil pumps and pipelines and storage and staging facilities. 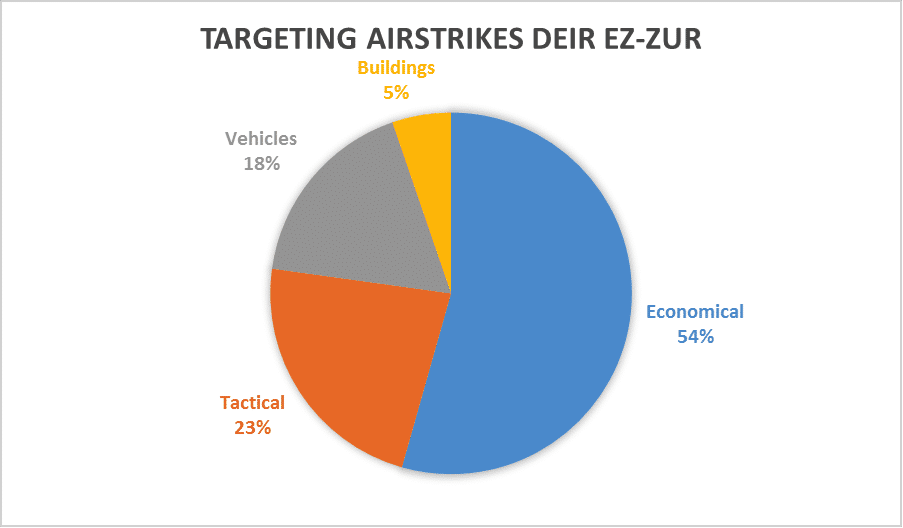 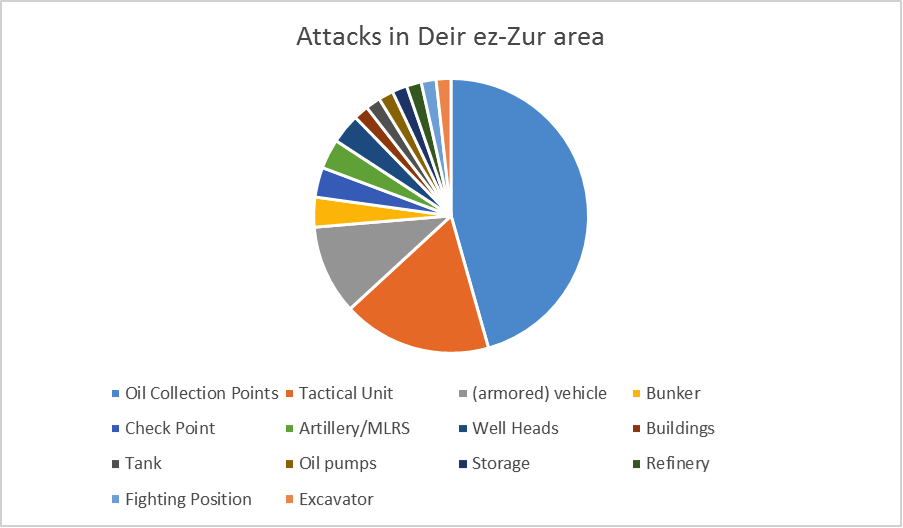 To specify the 57 airstrikes even more in-depth:

In total, 31 of the 57 airstrikes in Deir Ez-Zur were economic targets. Twenty six attacks on oil collections points, two wellheads, one on oil pumps, one refinery and one storage facility. The second groups of targets were tactical in nature and included ten tactical ISIS units, two ISIS checkpoints and one fighting position. 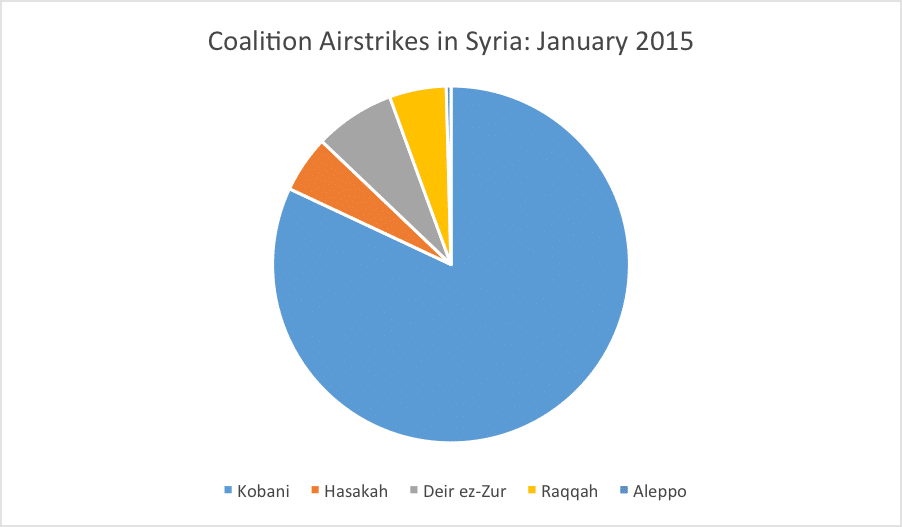 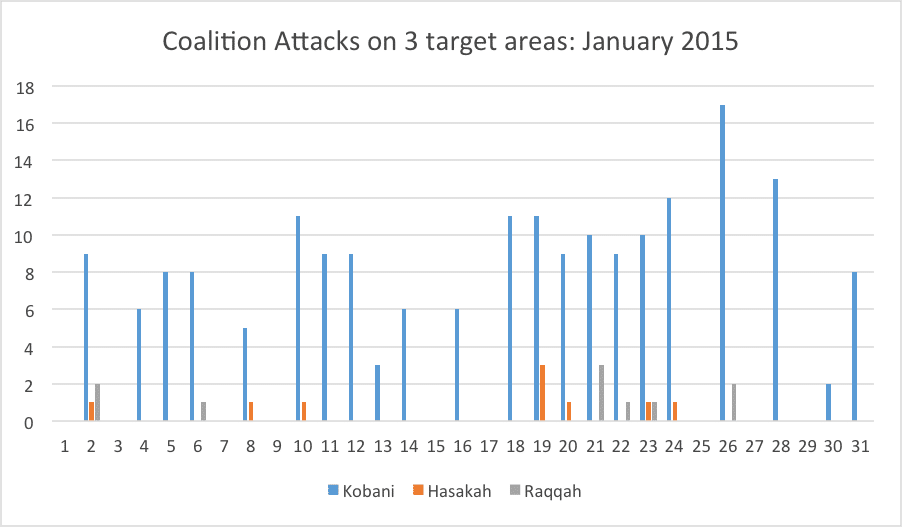 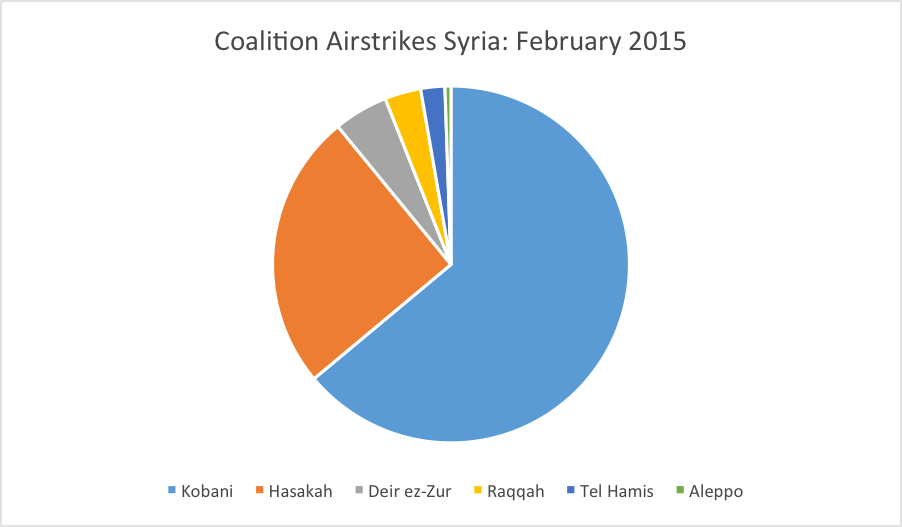 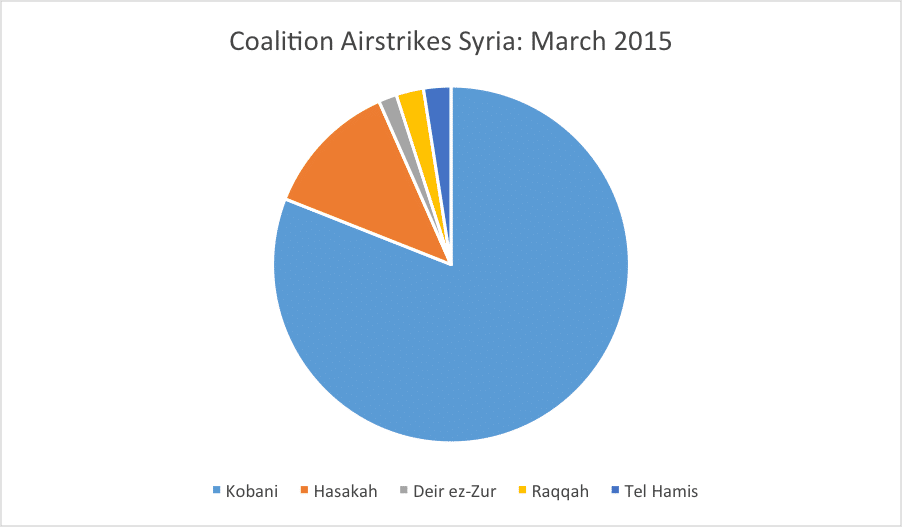 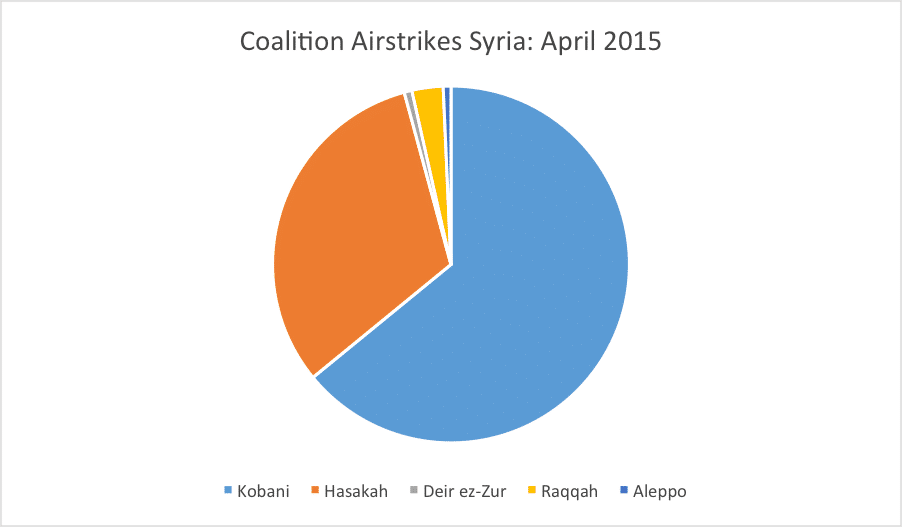 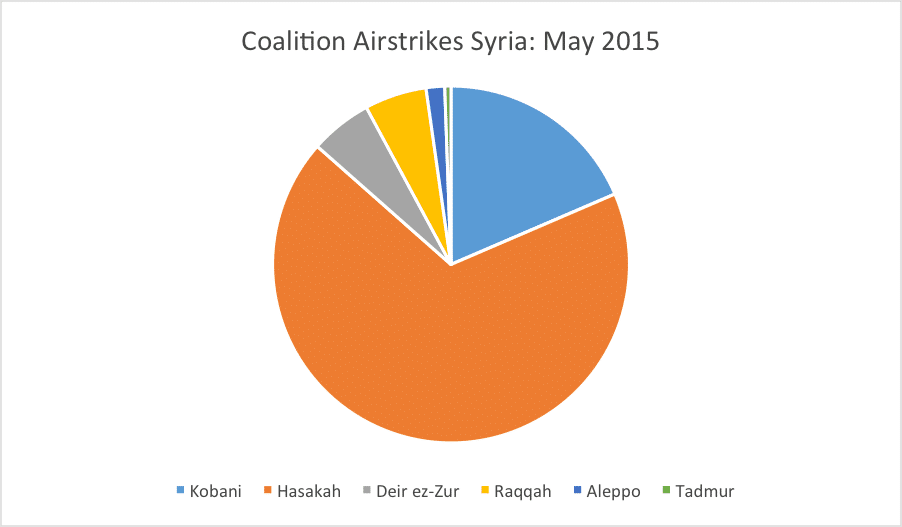 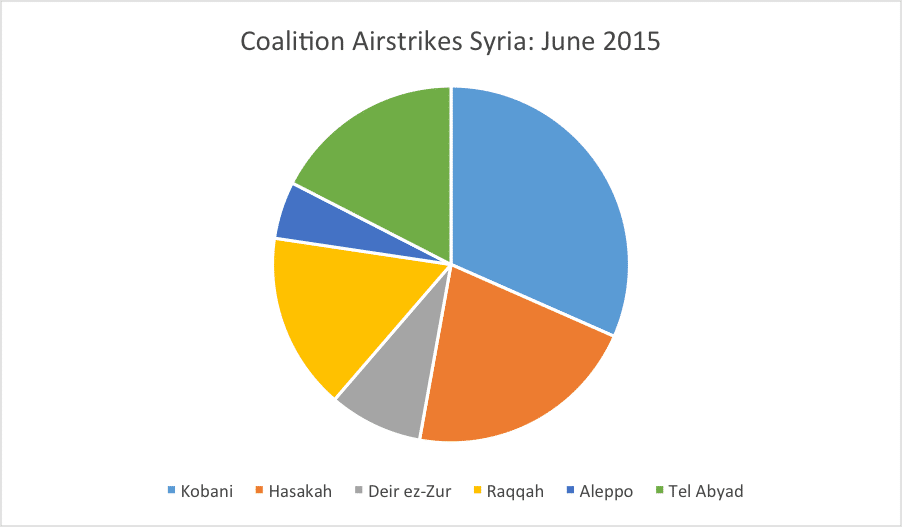 Subscribe
0 Comments
Inline Feedbacks
View all comments
Share. Twitter Facebook Pinterest LinkedIn Tumblr Email
Previous ArticleKuwait Pavillion in the Milan Expo: Energy for Life
Next Article Laurent Fabius: “We should not have to choose between a dictator and terrorists”
wpDiscuz
0
0
Would love your thoughts, please comment.x
()
x
| Reply